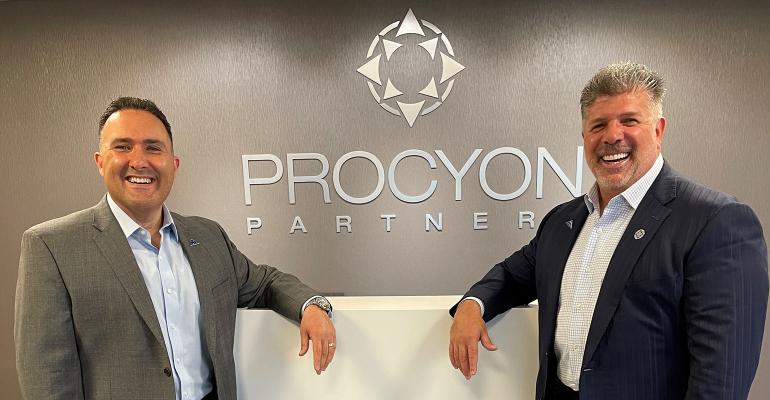 Two firms affiliated with Dynasty Financial Partners announced Monday they were merging operations to create a $4.5 billion AUM firm with four offices on the East Coast and 24 employees.

Procyon Partners, based in Shelton, Conn., manages more than $4 billion in assets. The firm has merged with Pivotal Planning, a Virginia Beach, Va.-based firm managing $400 million.

Though Procyon is larger than Pivotal, the principals insist the transaction is a merger, not an acquisition: Pivotal partners traded equity and Procyon CEO Phil Fiore said Pivotal’s partners have become partners at Procyon.

On top of the two offices Procyon has—one in Connecticut and the other in New York City—it now adds Pivotal’s Melville, N.Y. office, which houses managing partners John Marchisotta, Michael Desmond, and James Diver, and its location in Virginia Beach, Va. where partner Michael Kelly works.

The two firms met at Dynasty’s annual summit two years ago in South Carolina. Fiore said Procyon was at a critical point in its growth; it had grown quickly since going independent in 2017 and joining Dynasty, and it needed additional resources.

Pivotal was in similar boat. It too was growing quickly since joining Dynasty in 2019 and was considering hiring 10 additional employees, said Marchisotta. Once the firms discovered they needed each other’s support, they worked to iron out the details of a merger.

Procyon and Pivotal are the first Dynasty firms to merge.

“It’s a very tight community and there’s a number of firms, so we expect that we’ll see more of this over time,” said Shirl Penney, Dynasty’s CEO.

Penney added that he hopes Dynasty firms choose to merge with other Dynasty firms to not only make integration easier, as both use the same back-office support system, but also to ensure the partnership holds onto the firms in the network, considering that an outside transaction could lead to a potential exit.

Dynasty, who has no minority interest in either firm, advised on both sides of the transaction. The platform for independent advisory firms primarily offers middle and back-office support services and offers a TAMP and an M&A business that offers debt, revenue participation and equity to help its advisor clients.