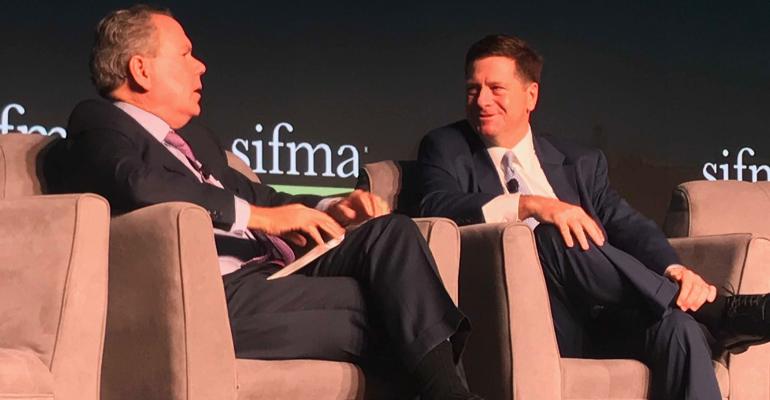 The SEC commissioner was among the choir while singing the praises of the soon-to-be-implemented rule at the trade association's annual meeting in Washington, D.C.

Securities and Exchange Commissioner Jay Clayton urged audience members at the annual meeting for the Securities Industry and Financial Markets Association (SIFMA) to let the Commission know whether it had adequately protected investor choice in crafting its Regulation Best Interest rule, but most of the executives on hand were in support. Clayton spoke about the rule during a wide-ranging conversation with SIFMA President and CEO Kenneth Bentsen Tuesday morning.

SIFMA, the trade and advocacy organization for broker/dealers, investment banks and asset managers, advocated for Reg BI during the rulemaking process, writing a letter of support in Aug. 2018. It was passed last June and will be implemented in June of next year, requiring broker/dealers to act in the “best interest” of their clients, though some have criticized the commission for failing to create a uniform fiduciary standard between broker/dealers and registered investment advisors.

Several other speakers at the conference were buoyant about the rule, including Robert W. Baird & Co. Vice Chairman James R. Allen (SIFMA’s current chair). Allen said the new rule mandated a higher conduct standard for broker/dealers and said it could be the most “significant enhancement of their conduct standards” since the Securities and Exchange Act of 1934.

“For the industry, the cost to implement will be significant, but we believe worthwhile, to uniformly enhance investor protection to the level investors should and do expect,” he said.

In a discussion Tuesday morning, Bentsen asked Allen and Joe Sweeney, the president of advice and wealth management, products and service delivery at Ameriprise, about the number of states pursuing their own attempts to establish more stringent fiduciary standards; both Massachusetts and New Jersey have sought public comments on their own regulatory fiduciary rules, while Nevada is pursuing stronger standards via legislation. Sweeney noted that most of these pushes have been concurrent with the development and passage of Reg BI, prior to its implementation.

“If a state or another government agency sees a vacuum, there is a desire to fill that vacuum and I’m not going to blame them for trying to fill that vacuum. But I think we have to hit the pause button and have good, common sense conversations,” he said. “My hope is, let’s get Reg BI in on June 30th of next year, and then let the states make adjustments or comments relative to that.”