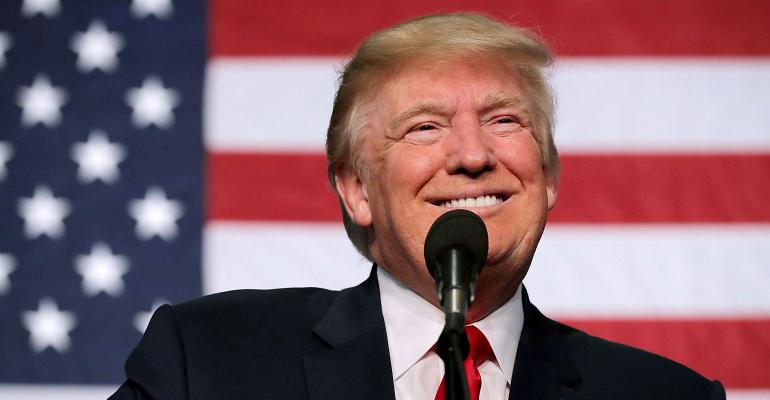 Like the wider population of financial advisors, the majority of Chartered Financial Analysts (51 percent) believe the election of Donald Trump will positively impact business at investment management firms; only 13 percent expect a negative impact, according to a new survey by the CFA Institute. Nearly half (49 percent) expect the result to have a positive or very positive impact on client portfolios on a one-year basis, with 19 percent anticipating a negative impact. CFA certificants are more bullish on the bond market, with 85 percent anticipating a moderate or sharp rise in bond yields; 62 percent expect a moderate or sharp boost in U.S. equities. Financial, energy and industrial stocks will fare the best, with the majority of respondents expecting a positive impact, while utilities, real estate and information technology could be negatively impacted. Fifty-three percent say they don’t plan to restructure portfolios in light of the results. While many firms are looking to comply with the Department of Labor’s fiduciary rule by justifying their fees, one technology is looking to help advisors develop a more compliant fee schedule. Utilizing new technological developments in image recognition, text parsing and statistical analysis, RiXtrema built FeeComp, a database of advisory fees. With FeeComp, advisors can benchmark the fees they charge to the rest of the industry based on account size, geography and services offered. "Our clients always want to know where they stand in relation to their competition. In addition, the DOL fiduciary rule requires advisors to charge no more than reasonable compensation," said Daniel Satchkov, president of RiXtrema. "Financial institutions are responsible for creating fee schedules that adhere to this requirement. Our novel technologies allow for systematic organization and retrieval of unstructured data that is reported by advisors in form ADV Part 2." The database information will work with RiXtrema's other products, IRAFiduciaryOptimizer and 401kFiduciaryOptimizer, to enable advisors to document that their fees are reasonable. A former financial advisor in South Carolina has been ordered to serve two years in federal prison for stealing more than $3 million from clients from 1997 to 2014, according to local news reports. Claus Foerster, 56, formerly of Raymond James, Morgan Keegan and Citigroup, must serve the time and pay $3.5 million in restitution to his victims for multiple counts of wire fraud. According to U.S. Attorney David Stephens, Foerster used his position as a financial advisor to steal money from his clients. He would tell clients that he had located better investments than their current portfolios but they had to withdraw their money from their accounts and transfer them to Foerster's account for further investment. Once transferred, he would divert the funds for his own use, going as far as creating bogus account statements and returning some funds to clients as "profits." He was able to maintain the scheme through various firm changes for more than a decade. He had faced up to 20 years in prison and $250,000 in fines for each count.