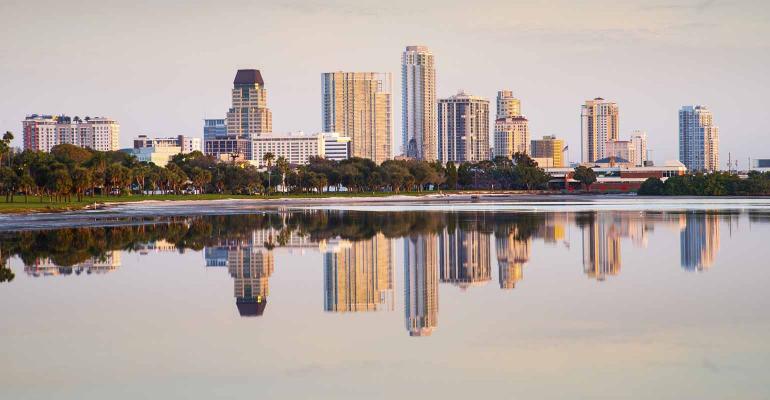 (Bloomberg) -- Cathie Wood’s move to St. Petersburg is giving an added boost to a Florida region that has quietly been booming, even as Miami and West Palm Beach generate more attention as destinations for New York finance firms.

With the addition of Ark Investment Management, which has about three dozen employees, the Tampa Bay metro area will have expanded assets under management by 61% to at least $582.4 billion since December 2019, according to Securities and Exchange Commission data. By comparison, the Miami metro area -- an area twice as populous with roughly 6 million people -- has seen a 58% boost to $864.4 billion.

“Everybody’s first thought tends to be of Miami, but what I know is that if I can get them to come here and think about us, they’re going to choose us,” St. Petersburg Mayor Rick Kriseman said in an interview.

The Covid-19 pandemic, which kept many workers home for months, has prompted finance firms to reconsider how much space they need in New York and other expensive cities. Florida has drawn companies with its year-round warm weather and lower taxes.

Miami and West Palm Beach, on the Atlantic Coast, have generated most of the headlines as finance companies shift south. But the Tampa region, across the state on the Gulf of Mexico, is making gains.

Ark, which is permanently closing its Manhattan office and moving to St. Petersburg, currently has $38 billion in ETF assets under management, down from a peak of more than $60 billion in February.

Overall, Florida has a very small piece of the investment-management business, and its inroads since 2019 have barely dinged New York. In fact, it’s still a much smaller player than states including California, Massachusetts and Pennsylvania, with only 1.4% of U.S. regulatory assets under management as of September, up from 1.3% before the pandemic.

Wealthy finance titans have long looked to Florida for its lower taxes, and the pandemic has seen more firms setting up satellite offices in the state. Ark, meanwhile, is moving its headquarters.

The firm said a “substantial” number of its employees had agreed to relocate and that it would accommodate remote work. Still, it could be challenging finding talent in Florida, according to Todd Rosenbluth, head of ETF and mutual fund research at CFRA Research.

“There’s certainly cultural differences and benefits to being in New York as opposed to being in Florida,” he said. “Their ability to recruit employees might be different when based in Florida.”