/sites/all/themes/penton_subtheme_wealthmanagement/images/logos/footer.png
Recent
Recent
Wealthies Circle Podcast: Heather Kelly on How the Pandemic Changed Wealth Management
Sep 24, 2021
13 Must Reads for the CRE Industry Today (Sept. 24, 2021)
Sep 23, 2021
The Co-Working Sector Is Bouncing Back
Sep 23, 2021
Household Net Worth in U.S. Hits Record on Surging Home Values
Sep 23, 2021
Featured
The 10 Best and 10 Worst States in Which to Retire in 2021
Jul 15, 2021
Poll: 15 Classic Books on Investing and the Markets
Apr 03, 2020
25 U.S. Markets Adding the Most Multifamily Units This Year
Feb 03, 2021
Fifteen Must-Listen Business Podcasts for Advisors
Aug 14, 2020
The Daily Brief
brought to you by 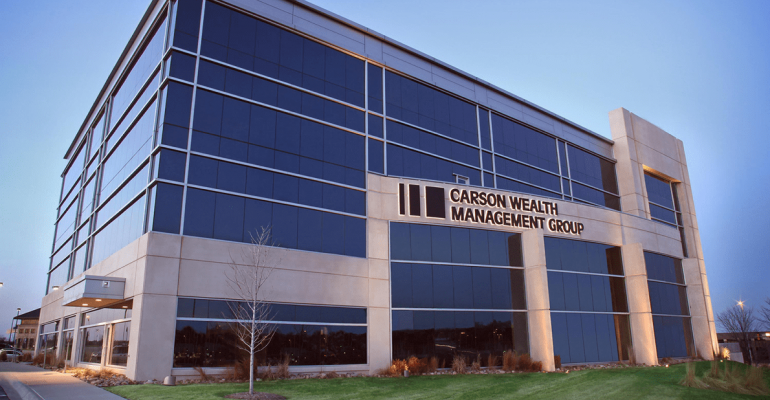 Carson Wealth moves into Indiana with the addition of Spectrum Management Group, the fifth team to join this year with over $500 million in assets.

"As we have followed Carson's evolution and thought about our own future, aligning with Carson made sense," Thompson said. "The pace of change in our industry is accelerating, so having a partner that is on the leading edge of that change will provide us the tools necessary to continue providing the highest level of service to existing clients.”

Phillips and Thompson previously worked at Raymond James and McDonald Investments before forming Spectrum Management Group in late 2011. They will both receive a small equity stake in Carson as part of the deal.

“We are as proud of adding them to our team as they are of adding us, as we look forward to growing our presence in Indiana,” said Ron Carson, CEO and founder of Carson Group.

Carson Wealth began pursuing equity stakes a little over a year ago. As part of its growth strategy, the firm takes a 25% equity stake in its partners’ businesses and receives a percentage of profits while offering the option for advisors to buy back ownership of their businesses should the two firms choose to separate. Carson executive Aaron Schaben has called the deals "alignments" with partner firms, helping them with capital and services to expand their practices.