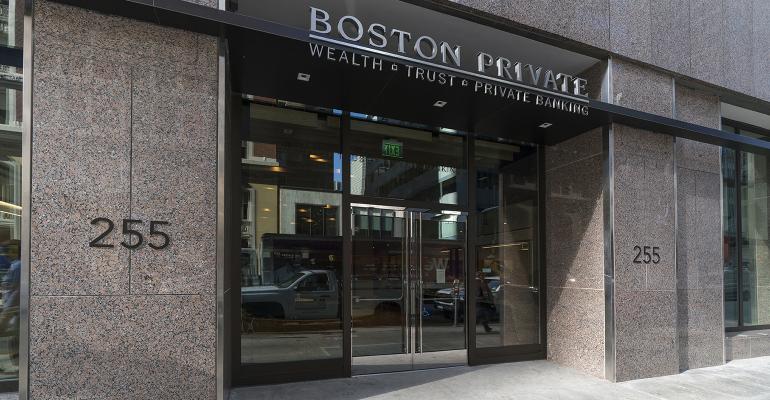 Despite the public protests of a large investor, shareholders overwhelmingly approved the sale, slated to close this summer.

Despite a challenge from a disgruntled investor, Boston Private Financial Holdings’ shareholders on Tuesday approved the firm’s sale to SVB Financial Group for $900 million.

In a preliminary count, some 89% of the shareholder ballots cast were in favor of the sale, according to an announcement.

“We are excited about our progress toward completing the transaction and believe that the combined company will be well-positioned to provide an enhanced experience for clients and deliver long-term value for shareholders,” said Anthony DeChellis, CEO and president of Boston Private, in a statement.

SVB Financial announced in January its plan to acquire Boston Private’s wealth management, trust and banking businesses, with some $17 billion in client assets ($14.4 billion in assets under management).

The investor claimed the price was too low for a regional bank, and was prompted largely by Boston Private executives’ misguided pursuit of a wealth management strategy that HoldCo principals called “a pipe dream.” HoldCo felt Boston Private’s shares should have been valued at $13.50 to $17 instead of the $11.50 price it saw the day after the sale was announced.

Proxy advisors said that the $14.96 per Boston Private share is a 78% premium to Boston Private’s $8.45 share price at the end of December, right before the acquisition was made known to the public.

A trio of Boston Private advisors announced their departure from the firm in mid-March. Two other advisors left in February, according to BrokerCheck.

Boston Private put out a statement that HoldCo’s attempt to dissuade fellow shareholders from approving the transaction was a “reckless gamble.” There was no guarantee that another acquirer would come forward with a higher offer, the statement read.

The acquisition is slated to close in the coming months.