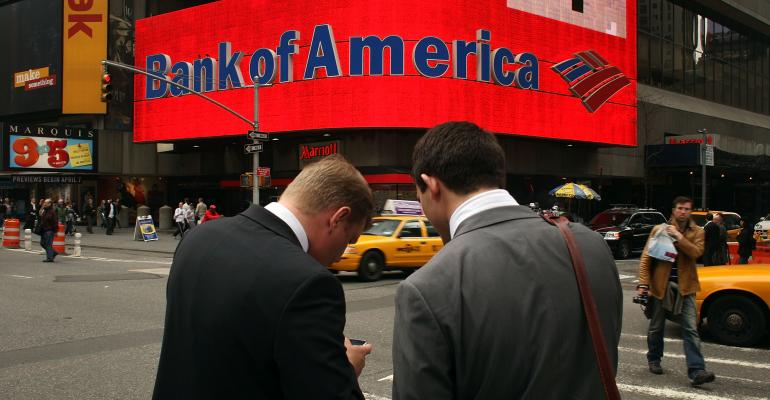 Bank of America reported a year-over-year rise in revenues and earnings for the overall bank on Monday, but earnings from the Global Wealth & Investment Management division, which includes Merrill Lynch and U.S. Trust, saw revenue drop 2.3 percent to $4.4 billion as higher asset management fees did not make up for lower transactional revenue.

Still, the division’s net income increased 1.8 percent from the fourth quarter of last year to $634 million, while adding 81 wealth advisors since the third quarter, for a total of 16,487 (Merrill Lynch Advisors grew the ranks 1 percent from last year to 14,629, the 12th consecutive quarter of net growth in the overall number of advisors, the bank notes.) Client balances were up 1 percent from last quarter and up 6 percent year-over-year to $2.1 trillion. The Merrill Lynch division added 129 advisors since last year, for a total of 14,629.

Merrill Lynch reported an increased shift from brokerage to fee-based accounts. Long-term AUM flows were $18.9 billion in the quarter, compared to $6.7 billion a year ago.

“Things tapered off at the end of the year,” Chief Financial Officer, Paul Donofrio, said Friday in a conference call with journalists. Fixed income trading “did very well in the first two months of the quarter,” he said.

Moynihan, 57, has been cutting costs for years while contending with persistently low interest rates. That’s starting to pay off as Wall Street firms benefit from a rebound in fixed income trading and the company moves beyond epic legal claims over mortgages that soured in the financial crisis. Last year, the bank set a target of $53 billion in annual expenses by the end of 2018, or about 8 percent less than 2015.

The lender revised earnings for recent years on Oct. 4 to reflect a change in the way it accounts for certain securities held in its investment portfolio. The move brings it in line with other Wall Street firms and may reduce swings in quarterly earnings, the bank said. The firm also dissolved a business segment created in 2011 to house delinquent mortgages.

Bank of America slid 0.7 percent to $22.76 in early trading at 7:35 a.m. in New York. The shares gained 35 percent since Nov. 8 through Thursday — the most among large U.S. lenders — as President-elect Donald Trump’s victory fueled investor expectations that financial firms would benefit from rising interest rates and relaxed regulation.

Net interest income rose 6.3 percent to $10.3 billion, falling short of the $10.6 billion average estimate of 11 analysts surveyed by Bloomberg. Net interest margin, the difference between what a bank charges for loans and pays for deposits, was unchanged from three months earlier at 2.23 percent, and up from 2.14 percent a year earlier. The Federal Reserve’s quarter-point rate hike in December is expected to boost lending margins, with Bank of America among the most sensitive to interest-rate changes.

Investment-banking revenue, which includes deal-making and underwriting securities in the business run by Christian Meissner, slid 3.9 percent to $1.22 billion, the company said. That beat the $1.14 billion average estimate of seven analysts surveyed by Bloomberg. Last month, Moynihan said he expected those activities would generate $1 billion to $1.2 billion in the fourth quarter.

Consumer-banking profit rose 11 percent to $1.92 billion, while income from credit cards fell 1.8 percent to $1.29 billion from a year earlier.

WealthManagement.com's Thomas Seubert and Bloomberg contributed to this report.