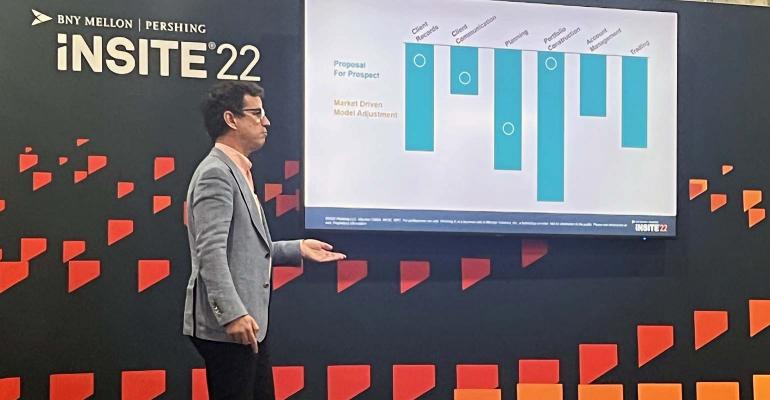 Photo by Ali Hibbs
Bryan Hamilton, the head of design and user experience at Pershing X, speaking at the Inside 2022 conference.
News>Industry

BNY Mellon’s Pershing X, the banking giant’s new fintech division, wants to give advisors—all advisors, not just those that custody with Pershing—more face time with clients by offering an integrated, all-in-one wealth management platform that will be multicustodial and reach beyond the walls of Pershing’s current tech platform for RIAs, with a strong focus on an intuitive user interface for both advisors and clients.

During the INSITE 2022 conference held at the Gaylord Texan Resort in Grapevine, Texas, Pershing X President Ainslie Simmonds dropped the fun fact that BNY Mellon itself was founded by Alexander Hamilton in the 18th century, saying it sometimes seems as if wealth management firms have yet to catch up to the current century in terms of the tools that should be making advisors’ jobs easier.

Pershing X is one of BNY Mellon’s “top investment programs,” according to Pershing CEO Jim Crowley, who tapped Simmonds to lead the project. Simmonds has held top digital posts at LearnVest, Northwestern Mutual and PIMCO Investments. At BNY Mellon, she oversees a team of close to 400 engineers, designers and product managers working on the new initiative, she said during a meeting with asset managers at the conference.

Citing a Cerulli Associates report, she said that the typical advisor spends only 25% of working hours with their clients. The other 75% is presumedly spent in front of a computer running an often-disjointed workflow from account opening to CRMs to investment management, rebalancing and portfolio reporting.

“We think the problem is that these applications don't connect to each other at all,” she said, noting that independent advisors generally pick and choose disparate digital tools that are then “cobbled together” in-house. “It’s a horror show. People spend all this time downloading, uploading, copying, pasting, sending things to spreadsheets, redoing things. It’s just crazy.”

Simmonds said the solution is to design a suite of services, akin to those from Google or Adobe, with high, often seamless, interoperability and a common interface.

Bryan Hamilton, the head of design and user experience at Pershing X, spoke during the conference about the difference between user interface and user experience—UI and UX. While UI involves providing recognizable tools that allow for easy navigation, UX relates to the options provided throughout the course of that navigation. Common UI and UX elements across separate yet related products make it easier and less time-consuming to use the technologies, he said.

Hamilton suggested that the Pershing X platform would be able to return as much as two-thirds of an advisor's time. “The 50% of the time we are trying to recover is in moving information [and] optimizing certain workflows to help me complete my task versus having to deal with a really horrendous kind of navigation,” he said.

To accomplish this, a dedicated design system management team will ensure ongoing communication between the individual teams working on each of the platform’s individual tools. Whether working on client interface, account management or portfolio construction software, said Hamilton, the goal is to identify elements and designs that can be duplicated or linked across the whole platform.

A Pershing X talking point heard throughout the event, the Cerulli statistic on an advisor’s time suggests that an integrated platform could allow advisors to spend more time with clients without sacrificing any of the requisite homework and housekeeping. One could also argue that it would keep advisors loyal to the Pershing X platform, even though Simmonds said an open architecture design would allow advisors to plug in external tools if they chose to do so.

Touching on this issue, Hamilton said that while platform users would have the option to select other products, it would become essentially impossible to ensure full interoperability in those instances. “That’s too complex,” he said. “No one can manage that.”

Once the platform is operational, Hamilton said, it will also provide unique opportunities around data and innovation, from learning what features are most popular and improving on them to identifying successful workflows across all stages of service and developing intuitive and repeatable best practice models available to all users.

Some of the Pershing X platform will be developed in-house, said Simmonds, but not all. They first looked at other tech products that could be integrated, such as the Optimal Asset Management direct indexing technology the firm acquired late last year, but chose to create their own trading and portfolio management software from scratch after not finding anything satisfactory in the marketplace. Albridge, the data aggregation and reporting tool owned by Pershing, will be folded under the Pershing X umbrella, according to reports.

In a meeting with asset managers during the conference, Simmonds suggested they would likely tap into the product provider lists, model marketplaces and asset management platforms the financial services firm already has in place.

It remains to be seen how willingly other custodians, like Schwab or Fidelity, will allow data integrations with Pershing X, but Pershing executives are confident that all will want to support the business of advisors.

The hope is to have a beta version, with limited apps, in a test market by early 2023. “And then we’ll keep adding apps,” said Simmonds, who estimates that it will be between two and three years before all core products have been added to the platform.