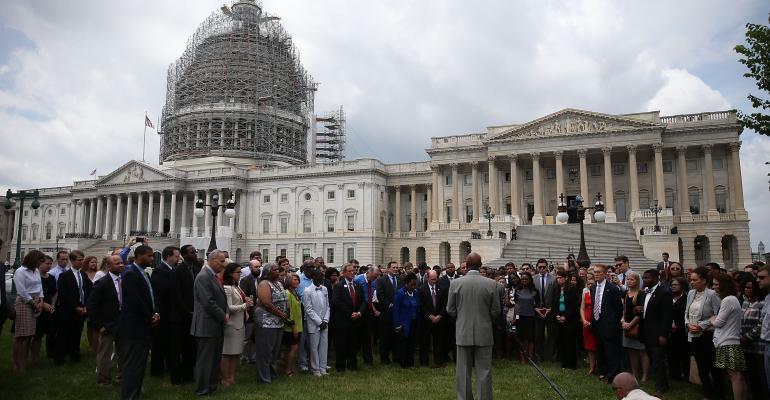 Legislation aimed at blocking the Department of Labor’s fiduciary rule hit the Senate on Thursday, mirroring a bipartisan initiative already moving ahead in the House of Representatives.

Senator Johnny Isakson (R-Ga.) introduced the Affordable Retirement Advice Protection Act, which would require Congress to approve any “investment advice rule proposed by the Obama administration,” according to a statement from the Congressmen’s office. The proposed legislation aims to amend the Employee Retirement Income Security Act of 1974 (ERISA), introducing a best interest standard for the entire financial services industry, both registered investment advisors and brokers.

The bill also seeks to implement rules requiring financial advisors to clearly communicate to clients all "key information" so they can make informed investment decisions and would penalize those advisors who violate investors’ trust.

“A comfortable retirement is part of the American Dream. Unfortunately, the fine print included in hundreds of pages of Department of Labor regulations that seek to redefine a single word would deny millions of Americans the chance to plan ahead,” Isakson said in a statement.

Isakson's Senate legislation mirrors H.R. 4293, Affordable Retirement Advice Protection Act, which the House Education and Workforce Committee passed on Tuesday by a vote of 22-14. Introduced in December by Reps Peter Roskam (R-Ill.) and Phil Roe (R-Tenn.), the bill would require Congress to approve the Department of Labor's fiduciary rule before it could be implemented. If they do not, the legislation proposes a new client best interest standard for the entire financial services industry, both registered investment advisors and brokers.

Additionally, the committee also passed H.R. 4294, the Strengthening Access to Valuable Education and Retirement Support (SAVERS) Act. That bill which would amend the tax code, is also designed to serve as an alternative to the Labor Department’s forthcoming rule.

In addition to Isakson's bill, Roy Blunt (R-Mo.) also introduced a secondary bill, the Retail Investor Protection Act, which would prevent the Labor Department from moving forward. It's similar to the legislation introduced by Rep. Ann Wagner (R-Mo.), which the House passed in October.

But even if legislation passes both the House and Senate, it may be too little, too late as President Barack Obama has vowed to veto any legislation aimed at delaying or rolling back the Labor Department’s rule.

The Labor Department sent its finalized fiduciary rule to the Office of Budget and Management last Thursday for review and approval. The agency has up to 90 days to process the rule, although many are predicting it will receive an expedited review.

While no one is certain of what the new rule will look like until after OMB review, it’s expected to require advisors overseeing retirement plans to act under a fiduciary standard, putting client interests ahead of all other considerations when making investment recommendations on accounts covered under the Employee Retirement Income Security Act.

But not everyone is waiting patiently until the OMB review is complete. Congressman Jared Polis (D-Colo.) sent a letter earlier this week to the agency requesting a “private and secure viewing of the rule that was submitted by the Department of Labor to OMB for me and for these other interested members of Congress.”

“There is no statute preventing this request, and in light of the precedent of members of Congress having the opportunity to view highly classified documents, including international agreements during active negotiations, I trust that you will respond promptly and positively to this request and I look forward to setting up a time,” the letter says.

Rep. Polis' office did not immediately respond to requests for comment on Thursday.

Updated 9:55 a.m. to include additional clarification regarding Blunt's legislation.