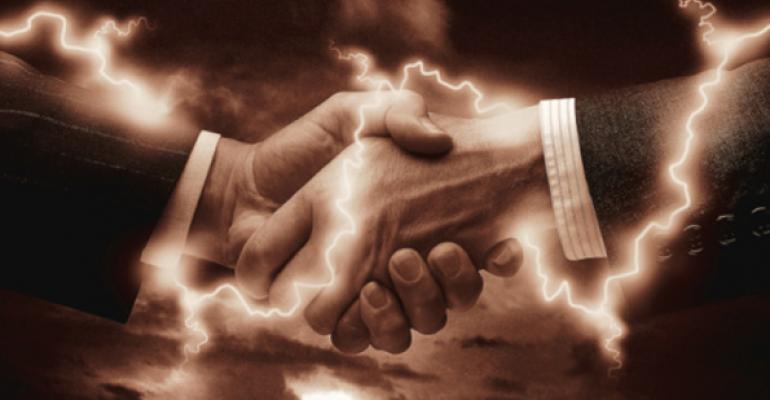 For Asset Managers Battling Index Funds, It's Hunt or Be Hunted

Things are heating up for an industry where big-ticket mergers are rare.

By Charles Stein and Matthew Monks

And on Tuesday, Legg Mason Inc. shares jumped as much as 6.2 percent after StreetInsider.com said the asset manager had received a takeover offer, citing an anonymous source. A spokeswoman for the Baltimore-based firm declined to comment on the report.

Things are heating up for an industry where big-ticket mergers are rare. It begs the question: Are more surprise hookups on the horizon if dealmaking continues? Here are a few possibilities that bankers, analysts and other industry players dreamed up in recent interviews.

BlackRock Chief Executive Officer Laurence D. Fink has assembled an industry giant with $5.1 trillion in assets, partly through acquisitions such as the 2009 deal that brought the iShares exchange-traded funds. What he hasn’t been able to do, even after shaking up the firm’s investment team, is get consistently good results from his stock pickers. They’ve trailed industry rivals over the long term despite an improved showing last year. Fink could wait for performance to turn around or he could go out and buy better returns.

With more than $800 billion in assets, T. Rowe Price is known for its stock-picking skill. At least 80 percent of its mutual funds have beaten their Lipper averages over three, five and 10 years. Even so, the firm posted a net outflow last year as investors pulled $5 billion in the fourth quarter.

T. Rowe Price has a distinctive corporate culture -- managers tend to spend their whole careers at the Baltimore-based firm -- so any deal might need to be constructed to preserve its independence.

Other possibilities: If the company isn’t available or its size proves daunting, BlackRock could land stock-picking talent by acquiring Artisan Partners Asset Management Inc., which has an easier-to-digest market value.

Franklin is a big money manager that has gotten smaller. Its assets have shrunk to $729 billion from $920 billion in June 2014 as investors pulled cash from funds like  Michael Hasenstab’s Templeton Global Bond Fund, which slumped with emerging markets in 2015 before rebounding last year.

Acquiring Invesco, with more than $800 billion in assets, would expand Franklin in a hurry. The deal would give it added exposure to the fast-growing ETF business -- Invesco’s PowerShares has more than $100 billion -- as well as a much larger presence in Europe through the Perpetual unit, a U.K. retail fund manager. Another plus: the companies know each other. Invesco CEO Martin Flanagan was previously chief financial officer and co-CEO of Franklin.

Figuring out who would run the combined company might be a problem, not only because the two firms are similar in size but also because the CEOs are close in age: Flanagan is 56, Franklin’s Gregory Johnson is 55. Johnson’s family owns a major stake in Franklin, which could give him the edge. There could also be a messier-than-usual task of eliminating overlapping jobs and products.

With more than $8 billion of cash on the balance sheet, Franklin has the resources to make such a major acquisition. Asset management is a “slower growth, more mature business,” Johnson said on an October earnings call, yet “one way to gain efficiencies is through consolidation. Companies will be more open to that avenue to create value.”

Other possibilities: Franklin could set more modest sights going after WisdomTree Investments Inc., the only pure-play publicly traded ETF provider. WisdomTree, known for its “smart beta,” or rules-based, investing strategy, comes with baggage. Its two biggest products, currency-hedged funds that provide exposure to European and Japanese equities, both suffered sizable redemptions in 2016 -- one reason the company’s stock fell 29 percent. Still, the firm has an established name in the $2.6 trillion U.S. ETF market.

Cross-border takeovers appear to be on the rise, and Aberdeen’s Martin Gilbert may have a touch of Janus jealousy. The U.K. money manager’s CEO called the Janus-Henderson pairing “very smart,” telling journalists on a November conference call, “We’d like to do something like that.”

Aberdeen suffered redemptions of 32.8 billion pounds in the year ended Sept. 30 as clients bailed on its emerging-market funds. The company is heavily dependent on its home turf -- 76 percent of its money comes from the U.K. and the rest of Europe, only 16 percent from the Americas, according to its website.

Artisan, the Milwaukee-based firm with $100 billion in assets, would give Aberdeen greater scale in the U.S. and access to a new pool of customers. One drawback for Aberdeen is the weak British pound, which as of Tuesday had lost 16 percent of its value against the dollar since the June 23 Brexit vote shook currency markets.

Other possibilities: Aberdeen could buy Legg Mason. The company is a collection of money-management brands with distinct skills -- stocks, bonds and niches such as infrastructure -- and it’s been busy adding more pieces. Conversely, while Gilbert has said Aberdeen wants to stay independent, it could also make a plausible target for an American company looking to grow in Europe. One possible buyer is T. Rowe Price, which said at a Feb. 2 event for investors that its wants to become more globally diversified. About 95 percent of T. Rowe’s assets are from the U.S.

TCW, best known for running the biggest actively managed U.S. bond fund, the $78 billion Metropolitan West Total Return Bond Fund, has been majority-owned by Carlyle Group LP since 2012. Private equity firms almost never hold onto purchases forever, so the betting is that TCW, with about $190 billion, will return to the market sometime soon.

The management of TCW, led by CEO David Lippman, has a say about its fate because it owns about 40 percent of the business. Bankers who have met with Carlyle say TCW executives would like to stay independent, which could hinder a sale to a large U.S. asset manager or life insurer that would aim to absorb its operations and cut costs.

Other possibilities: A better bet might be selling all or part of the business to an overseas financial-services company or sovereign-wealth fund that would take a hands-off approach. Prospective suitors could include Japanese firms seeking to expand in the U.S., such as Sumitomo Mitsui Financial Group Inc., Mitsubishi UFJ Financial Group Inc. or Asset Management One, the joint venture between Mizuho Financial Group Inc. and Dai-ichi Life Holdings Inc. Another possible buyer is HNA Group Co., the Chinese conglomerate that recently agreed to buy Anthony Scaramucci’s fund-of-hedge funds firm SkyBridge Capital and acquired a stake in German lender Deutsche Bank AG.

Cohen & Steers, with $58 billion in assets, invests mainly in real estate investment trusts and other assets that emphasize yield. Unlike many active managers, the firm has been attracting money -- $6.7 billion in 2016. Its founders Martin Cohen and Robert Steers, who own more than half the shares, are in their sixties.

Other possibilities: If Legg isn’t interested, Cohen & Steers is manageable enough in size to make an affordable acquisition for a range of fund companies looking to expand beyond traditional stocks and bonds.