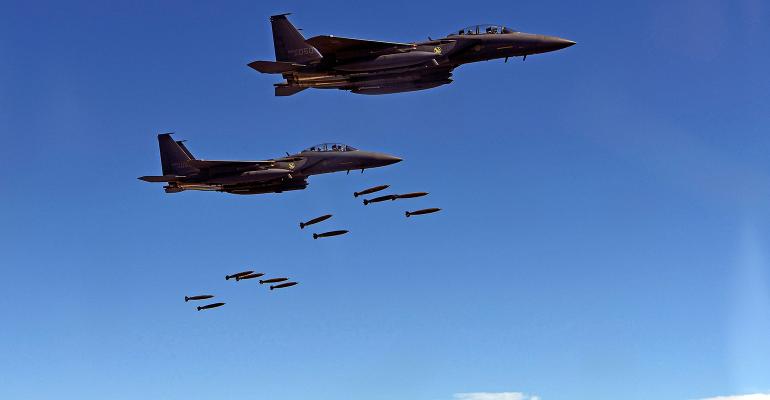 The Asset Manager Arms Race Has Only Just Begun

It was a banner year for mergers in money management as the continuing fee war squeezes margins. Don’t expect it to slow down in 2021.

(Bloomberg Opinion) -- For years, the asset-management industry has braced itself for shocks. In 2018, $369 billion poured out of long-term mutual funds in favor of exchange-traded funds, a record at the time. In 2019, the case for traditional actively managed mutual funds became even harder to make when Charles Schwab Corp. jump-started a race to the bottom among online brokerages by eliminating commissions for ETFs along with U.S. stocks and options.

If those were tremors, 2020 will go down in history as an earthquake.

Even before Covid-19 roiled global markets and brought the Robinhood crowd and Dave Portnoy of Barstool Sports into the Wall Street zeitgeist, there were already signs of seismic change. On Feb. 18, just a day before the S&P 500 Index set a pre-pandemic record, Franklin Resources Inc. announced a deal to acquire asset manager Legg Mason Inc. for almost $4.5 billion, a move that would bring its combined assets under management to $1.5 trillion. For both Franklin, an iconic investment manager that started in 1947, and Legg Mason, whose precursor firm dates to the 19th century, it was a tacit admission that they could no longer compete with BlackRock Inc. and Vanguard Group Inc. on their own.

The global pandemic could only constrain this consolidation for so long. In early October, Morgan Stanley announced it was acquiring Eaton Vance Corp. for about $7 billion. Bringing in the Boston-based company’s more than $500 billion in assets meant Morgan Stanley Investment Management would manage about $1.2 trillion, finally reaching Chief Executive Officer James Gorman’s goal to join the $1 trillion club.

Morgan Stanley’s move created something of a domino effect among banks. By the end of the month, Bloomberg News had reported that Bank of Montreal was exploring options for its fund business, which managed more than $273 billion at the end of 2019, as was Wells Fargo & Co., which had $607 billion in assets compared with more than $1 trillion managed by rivals JPMorgan Chase & Co. and Goldman Sachs Group Inc. Across the Atlantic, Societe Generale SA decided to pursue a sale of its Lyxor asset-management business, which oversees $180 billion and is one of Europe’s largest providers of exchange-traded funds. Taking a different path, Credit Suisse Group AG said it cut 10% of the staff at its asset-management business, which oversees $494 billion and has 1,100 employees, as it tries to turn around the unit.

Even Australia got in on the action. Earlier this month, Sydney-based Macquarie Group Ltd. struck a $1.7 billion deal to buy Waddell & Reed Financial Inc.’s $72.4 billion asset-management unit to expand its U.S. footprint. That’s even after clients yanked almost $16 billion from Waddell & Reed’s funds since the start of 2019. Macquarie, like Goldman and Morgan Stanley in the U.S., is searching for more stable revenue sources than typical investment banking.

If all that weren’t enough, Bloomberg News on Friday dropped perhaps the biggest asset-management bombshell yet: State Street Corp. is exploring options for its asset-management business, reportedly evaluating combinations with Invesco and UBS Group AG. State Street Global Advisors has more than $3 trillion under management, including the SPDR S&P 500 ETF Trust, which became the first U.S. ETF in 1993 and is the world’s largest with about $320 billion in assets. According to Eric Balchunas at Bloomberg Intelligence, State Street’s ETFs took in $25 billion this year, with 86 different funds experiencing inflows. All that, and yet it still might be sold.

My Bloomberg Opinion colleague Elisa Martinuzzi cited State Street as an intriguing option for JPMorgan, as it looks like the only feasible takeover that would be enough to propel the bank’s $2.6 trillion asset-management business into the same stratosphere as BlackRock and Vanguard. Crucially, it would be a quick way to become a even more serious threat in ETFs. Until recently, its Ultra-Short Income ETF (ticker: JPST) was the largest actively managed ETF.

Of course, the easiest path isn’t always the best one. So far, the announced consolidations make sense on their face. Invesco’s decision to buy OppenheimerFunds from Massachusetts Mutual Life Insurance Co. in late 2018 was a way to bulk up in active management while achieving hundreds of millions of dollars in savings. Franklin and Legg Mason combined strike an almost perfect balance between institutional and retail investors, while Franklin retains its identity as a fund manager that seeks global opportunities. Eaton Vance has the kind of white-shoe culture that has long defined Morgan Stanley — certainly much more than E*Trade Financial Corp.

Nick Maroutsos, head of global bonds at Janus Henderson Investors, has experienced the industry’s consolidation first-hand. In 2006, he co-founded Kapstream Capital, which was purchased in July 2015 by Janus Capital Group, which then merged with Henderson Group soon thereafter.

Kapstream “slid in nicely to add another feather in the overall fixed-income cap,” Maroutsos said, given his funds focused on global absolute-return strategies. “For us, it was really important to get that distribution channel. Janus is notorious for doing exceptionally well in the retail space. And they’ve proved that — I mean, we started our ETF four years ago with $25 million and now we’re at $2.9 billion,” he said, referring to the Janus Short Duration Income ETF (ticker: VNLA).

“I don’t see why it would stop,” Maroutsos said of the trend toward mergers and acquisitions. Still, while “consolidation can be good, it can also be poor if it’s not executed correctly,” Maroutsos said. “I don’t think it’s as easy as just merging companies and saying ‘OK, we’re going to be better off.’”

Dimon and other CEOs know this, of course. But if the late burst of activity in 2020 is any indication, it’s going to be difficult for them to resist acting quickly for fear of being left behind. Bloomberg Intelligence’s Alison Williams sees Goldman, Invesco and DWS Group joining JPMorgan as the next round of potential buyers. Potential targets could include WisdomTree Investments Inc. and — believe it or not for Maroutsos — Janus Henderson, among others.

Fund flows this year should add a sense of urgency for asset managers. Bloomberg News’s Katherine Greifeld reported that investors have added some $427 billion to U.S. ETFs in 2020, while mutual funds have lost about $469 billion, which would be the worst outflow ever in three decades of Investment Company Institute data. It’s not quite “game over” for traditional mutual funds, but it’s unclear how they plan to recapture the market share they’ve lost. Management fees can only drop so much before talented investors seek other opportunities. And even then, BlackRock and Vanguard can seemingly always go lower. Especially in fixed income, where yields across the board are near record lows, a difference of a few basis points in the expense ratio can make a noticeable difference.

Certainly, lower-cost investing products shift huge sums of money from fund managers to individuals, which is better for just about everyone except the professional investor class. But if asset managers continue to consolidate so briskly, it’s not hard to envision a future in which individuals have a choice of just a small group of super-sized investment managers, each of which owns a giant chunk of every company. My Bloomberg Opinion colleague Matt Levine raised some uncomfortable questions about this trend after the Franklin-Legg Mason merger in February:

If the same dozen people control every public company — Harvard professor John Coates calls it “The Problem of Twelve” — what does it mean? Should someone do something? Should those people be required to … explain their votes? Not vote their shares? Vote in a specific way? Ask their ultimate investors how to vote? Have some other formalized rules for how they vote? They have accrued all this power, sort of by accident; should there be rules for how they exercise it? Or is this just how the market works and everything is fine?

There aren’t any clear answers. But flows into ETFs suggest individuals have no qualms with the sheer scale of a company like BlackRock, which managed the Federal Reserve’s Secondary Market Corporate Credit Facility and has had two of its executives tapped for important roles on President-elect Joe Biden’s economic team. As Levine has pointed out, the economy is increasingly tied together by common ownership of all companies by the same investors. This should probably raise some red flags. But much the way tech giants have largely brushed off lingering privacy concerns, the ease of trading ETFs and their rock-bottom costs are likely to win the day.

This year will be remembered for any number of reasons — a tipping point in the investment management industry is likely one of them. It could get even more frenetic in 2021. All indications suggest the asset manager arms race has only just begun.