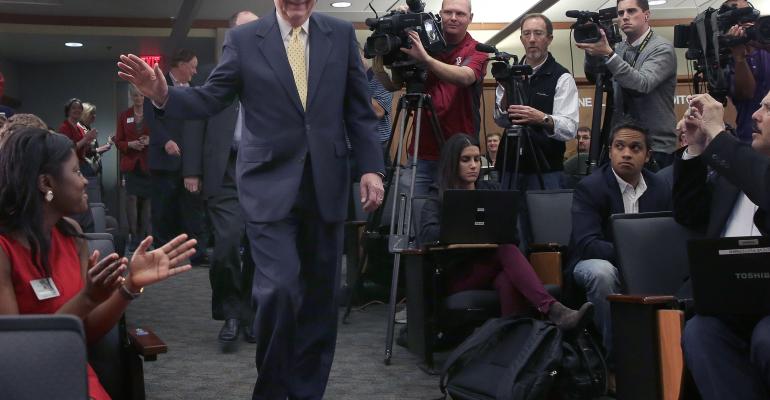 While the economy was one of the central issues that propelled Republicans to a major victory in Tuesday's midterm elections, many financial advisors told WealthManagement.com that the GOP majority in Congress would have little, if any, direct impact on the market.

“Politics has only a marginal impact at best on the financial markets, our industry, or the economy in general,” said John Kleponis, CIO of Yosemite Capital Management. “Usually the markets and the economy affect politics, not the other way around.”

While admitting that there would be little direct effect of a new Congress, some advisors were cautiously optimistic that Republican economic policies could usher in a new, business-friendly climate in the U.S.

“I don’t anticipate the impact will be seen in the very near future, other than perhaps a short upward tick due to expectations, but overall my expectation is that the new government make up will bring more fiscal responsibility to Washington,” said Matthew Medeiros, the president and CEO of the Institute for Wealth Management. Medeiros hopes the GOP will propose a new budget, reign in regulation and reform taxes on both the corporate and personal level, making businesses more comfortable with long-term growth plans.

The short-term uptick may already be happening, as both the Dow Jones Industrial Average and the S&P 500 both closed Wednesday up slightly at 0.6 percent. Angela Bender, a managing partner at AMJ Financial Wealth Management, said that this optimism is just what the market needs.

“Ultimately all of this adds up [to] more bullish sentiment coming into the stock market about the U.S. ability to maintain growth in the face of deflationary pulses coming from Europe and Asian," Bender said.

Others, like Dave Young from Paragon Wealth Management were more bullish, saying that the Republican agenda could help the economy “finally kick into gear.”

However, many advisors pointed out that the reform promised by Republicans would be difficult to achieve. Scott Kubie, a chief strategist at CLS Investments, said that while there would be narrow winners (such as the coal industry if Republicans get the Keystone Pipeline approved), broader tax reforms are unlikely.

“The most likely first step is a full or partial tax holiday on cash held overseas by U.S. corporations,” Kubie said. “Until that step happens I expect tax reform to be too difficult to do politically.”

The new Congess must also contend with a Democrat in the White House ready to veto bills after years of Republican filibustering.

“While the Republicans have a majority in both House and Senate, it will be hard to get the 70 votes to avoid a President’s veto,” said Jeffrey A. Carbone, a managing partner at Cornerstone Financial Partners. “Do-nothing Washington might be here to stay for another two years.”

At the end of the day, many financial advisors seem as skeptical as the rest of America that this new Congress will be anymore effective than the one before it.

“Our political class across the board engages in selfish, petty, ignorant, and short term activities to put themselves, their political party, and campaign contributors ahead of the country and its people,” Kleponis said. “Sadly, the latter, while nothing new, is not likely to change as a result of the election.”