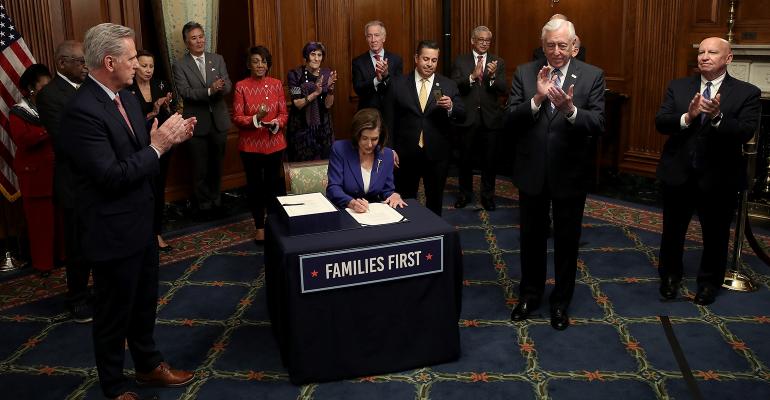 The House of Representatives approved the third phase of the rushed stimulus package. Advisors are poring over the details. Here are some of their immediate reactions.

U.S. lawmakers have reached a deal on the $2 trillion stimulus package, also known as phase three of the Coronavirus Aid, Relief, and Economic Security (CARES) Act.

The package is purposed to provide financial relief to American workers and businesses hurt by the coronavirus pandemic. More than 3 million Americans filed for unemployment during the second week of March as companies large and small closed their doors or pulled back. How quickly those jobs come back remains to be seen. The package is part of a multipronged approach, including moves by the Federal Reserve to prop up the economy and ensure debt markets remain liquid. More may have to be done, depending on the length of the pandemic.

Related: What To Do With $1,000? Advisors Debate Government Stimulus Checks

Details of the bill have yet to be fully disclosed. Clients, already concerned about their portfolios, are asking advisors for guidance on how to take care of their employees, handle a decline in income or how to tap emergency resources if they’ve been laid off. Advisors have been monitoring the updates to the stimulus package to gather the appropriate information for their clients. Not surprisingly, they have strong opinions about what they see.

Below are some advisor responses to phase three of the CARES Act:

Related: Federal Relief Package Will Be a Disaster for Long-Term Investing

"I like required minimum distributions (RMDs) being waived for 2020. Most investors have money invested in the stock market, and now is not a good time to be forced into selling stocks. Keep in mind that most investors should be diversified and have until the end of the year so it shouldn’t be a big deal to most retirees taking RMDs.

I don’t like waiving the 10% early penalty on premature distributions from retirement accounts. People are hurting around the country, financially, myself included, but this provision runs the risk of being abused. Investors might talk themselves into premature withdrawals because it’s easy but not always in the best interest of the investor, long term. This provision should be considered only as a last resort, not a first choice.

I like that the payments are based on income brackets. Full payments will go to individuals with under $75,000 of income, reduced payments go to individuals making between $75,000 to $99,000, and no payments for anyone earning more than that. Couples will get double the payments and their phaseout numbers are exactly double that of individuals. I like this because it’s the average American who will need direct assistance, not the high-income earners. Everyone will feel the pain from this event, but the lower-income earners will feel more of it.

Payments and interest on federal loans will be waived for six months. The money will have to be paid, but it gives folks half a year of breathing room to figure out where things go from here. If someone isn’t affected by the current environment, use the six-month hiatus as an opportunity to get ahead. You can save that money, or invest it and shore up your financial situation.”

“I am impressed that anything was done and there was unanimous consensus. I think it’s a decent thing. But the biggest issue is that there can be phaseouts based on how much income you had in 2018. This is supposed to help people that are being negatively affected right now in 2020. People aren’t feeling the pain of this coronavirus pandemic in 2018, they’re feeling it now. I think there are some flaws there, but I do appreciate that IRA deadlines are pushed back, and the tax filing deadlines are pushed back.”

Feraud Calixte, the founder and advisor at Vantage Pointe Planning in Burlington, N.C.

“The biggest thing that people were looking for is that they wanted [legislatures] to stop the bleeding, stop the economy from spiraling out of control. This is what the package was designed to do, and in that regard, that's a positive.”

“It gives a little confidence that small business clients can hold on a little longer to their jobs. But I'm ready to witness what the corporations and small businesses will do with that money. The government did not stipulate what it could be used for. As we saw in the past, especially with big corporations, they bought stock instead of putting that cash aside for times like this. Will these corporations put every single cent aside to pay their employees or are they going to put that money towards something that doesn’t help?”

“I think it was a necessary step; I don’t think there was much choice. The rebate and the loans to the small businesses are going to be important. Tourism is a big thing in Austin, and so there’s a lot of economic activity around those events. Their revenue stream is compromised for an entire year. It’s good that [the government] is doing what they’re doing, but the reality—120 days from now—how do we keep as many small businesses as we can so that the employees getting these rebate checks actually have a job to go back to?

When you look at the larger scope of it, the $4 trillion that the Federal Reserve is using is meant to help stabilize the interest rate environment for people who are looking to buy a home or looking to refinance a home. The idea that the Fed is using those funds to prevent interest rates from spiking is really important. They did it in 2008; they just did it a lot later. We didn’t have affordable interest rates and banks didn’t want to lend when people needed money the most. Hopefully, the actions of the Fed will allow the banks to continue to loan to customers who really need those loans right now.”