/sites/all/themes/penton_subtheme_wealthmanagement/images/logos/footer.png
Recent
Recent
WeWork Buys Coworking Startup in First Acquisition Since Neumann
Jan 25, 2022
London Gets Back to the Office, But Bankers Drag Their Heels
Jan 24, 2022
Seven Must Read for the CRE Industry Today (Jan. 25, 2022)
Jan 24, 2022
What the Past Year Has Brought for a Newly Launched Investment Management Firm
Jan 24, 2022
Featured
The 10 Best and 10 Worst States in Which to Retire in 2021
Jul 15, 2021
Poll: 15 Classic Books on Investing and the Markets
Apr 03, 2020
25 U.S. Markets Adding the Most Multifamily Units This Year
Feb 03, 2021
Fifteen Must-Listen Business Podcasts for Advisors
Aug 14, 2020
DOL Fiduciary Rule
brought to you by 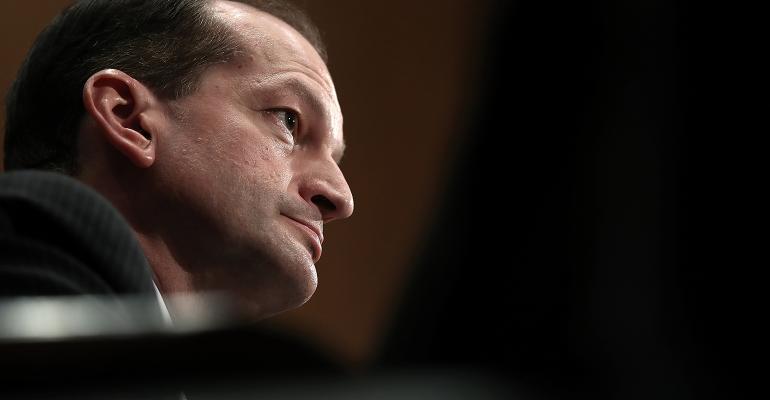 The Department of Labor won’t further delay the June 9 effective date for the fiduciary rule; review will continue until final implementation on Jan. 1, 2018.

Labor Secretary Alexander Acosta announced in a Wall Street Journal op-ed Monday evening that the Department of Labor won’t further delay the June 9 effective date for the fiduciary rule, which will greatly expand the definition of “fiduciary” under the Employee Retirement Income Security Act and the Internal Revenue Code. In explaining his decision, Acosta cited the Administrative Procedures Act, which governs federal rulemaking, stating that he believed it would not allow a further delay.

“We … have found no principled legal basis to change the June 9 date while we seek public input,” he wrote. “Respect for the rule of law leads us to the conclusion that this date cannot be postponed.”

Two prongs of the proposed rule, one expanding the definition of who is a fiduciary and another establishing impartial conduct standards, will immediately go into effect when the delay ends on June 9.

However, Acosta didn’t rule out further review of the rule noting that, “The Labor Department has concluded that it is necessary to seek additional public input on the entire fiduciary rule, and we will do so.” Such review will continue until the Jan. 1, 2018 final implementation date.

In a bulletin outlining its approach to phased implementation, the DOL explained, “[D]uring the phased implementation period ... the department will not pursue claims against fiduciaries who are working diligently and in good faith to comply with the fiduciary duty rule and exemptions, or treat those fiduciaries as being in violation of the fiduciary duty rule and exemptions.”

The DOL also released a new set of frequently asked questions related to the transition period.

Opinion around the industry is mixed, with the complicated emotions felt by many perhaps best illustrated in a conflicted statement from Financial Services Institute President & CEO Dale Brown, who explained:

“This decision will make it harder for many Americans to save for a dignified retirement. While we are disappointed in this latest development, we agree with the guiding principles Secretary Acosta outlined: that Americans should be trusted to make their own decisions about retirement planning advice, products and services they need; that the rule should benefit the investing public, not the plaintiffs’ bar and that the DOL should take full advantage of the SEC’s expertise to craft a better rule.”

In a statement, SIFMA President and CEO Kenneth E. Bentsen, Jr. echoed Brown’s remarks. He said SIFMA was disappointed that the rule was not delayed further, and believes the SEC is the best regulator to determine a best-interest standard for investors.

In his op-ed, Acosta seemed to suggest that the SEC has been sitting on the sidelines and should move forward in rulemaking regarding retirement accounts. “Under the Obama administration, the Securities and Exchange Commission declined to move forward in rulemaking," he wrote. "Yet, the SEC has critical expertise in this area. I hope in this administration the SEC will be a full participant.”

Paul Ellenbogen, the director of board consulting services at Morningstar, said it was unusual for the DOL to subvert the SEC on an issue that is clearly within its oversight. Given that circumstance, there might be some uncertainty around the rule until the SEC produces its own rules.

That future of the rule does seem less opaque now and brokerages that hadn’t already done so will begin working to be fully compliant before January.

Small brokerages in particular were likely planning on the rule going into effect as originally planned last fall, anticipating a probable election of Hillary Clinton as president, said Joseph Ebin, a manager at the wealth management research and consultancy firm Scorpio Partnership. But once Donald Trump was elected and the future became less certain, many firms paused the changes and were holding out to see what would happen.