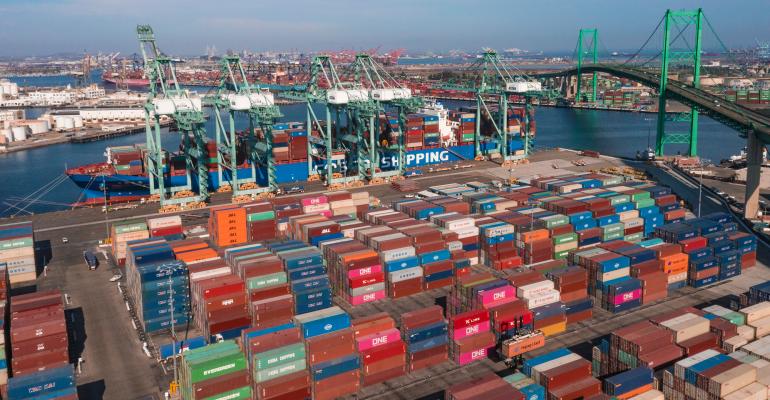 The lack of available space and spiking rents around major U.S. ports is leading tenants to diversify or relocate to smaller ports around the country.

An extraordinary amount of new supply—more than 700 million sq. ft. under construction and 650 million sq. ft in the pipeline—held down industrial rent growth nationally over the last year. But it’s a different story in supply-constrained port markets, especially Southern California and New Jersey, where rent growth is more than double the national average, according to David Greek, managing partner at New Jersey-based Greek Development.

He notes that emergence of the “just-in-case” inventory trend to offset product shortages due to supply-chain disruptions has spiked demand for warehouse space at ports, where shipments are received, processed, broken down and stored before being sent to distribution facilities near consumers.

Related: Demand for Industrial Space Is Slowing Down. But It’s Still a Landlord’s Market.

All top 10 U.S. port markets have experienced exceptional year-over-year rent growth, according to Kelsey Rogers, U.S. industrial research manager with real estate services firm JLL. But the rent premium in Los Angeles, which has a 2.0 percent industrial vacancy rate overall and even less vacancy near ports, tops the list, with rent growth nearly of 70 percent year-over-year.  According to an October report from data provider CommercialEdge, the average rate for deals signed here over the last year was $17.39 per sq. ft., while the average in-place industrial rent is $11.49. Rents in Miami and North Bay port markets also increased significantly since the third quarter of 2021, by 60 percent and 33 percent, respectively.

Industrial vacancy remains tight, at 2.5 percent, at the Port of New Jersey, where rents are up 7.6 percent year-over-year—the fourth fastest paced increase nationwide, according to Arizona-based Doug Ressler, senior research officer at Yardi Matrix and manager of business intelligence at CommercialEdge. Rates for new leases inked over the last 12 months have averaged $11.60 per sq. ft. compared to $8.87 per sq. ft. for in-place rents.

Related: What Impact Are Construction Delays Having on the Industrial Sector?

Tight vacancy at the port has expanded the distance tenants are willing to go to find space, notes Greek.  He says that 10 years ago, tenants had specific locations in mind when looking to sign new leases, but they are now traveling to rural South New Jersey, exits 2 and 3 on the turnpike and the Lehigh Valley in Pennsylvania to find space.

Unbridled rent growth in major port markets is a product of constrained supply and a lack of land for building new facilities. Greek, whose company is currently redeveloping infill sites in Philadelphia, notes that delivery of new supply in these high-barrier-to-entry markets can take years due to a lengthy approval process and clean-up of infill sites, which often had been occupied by dirty manufacturing operations or utility production.

Meanwhile, overcrowding and congestion at the ports of Los-Angeles and Long Beach have forced companies to divert ships to smaller ports, says Rogers, noting that labor strikes and sub-one percent vacancy are also contributing to these shifts. The migration of these industrial occupiers from the West to the East Coast has benefited markets including Savannah, Ga., Jacksonville, Fla. and Houston, where there may be more space availability and lower rents.

While DeNight expects import volumes to the U.S. to taper off in the short- to medium term, she notes that the continued shift in market share from West Coast ports to East Coast ports is a structural trend that will continue to gain steam. “Friendshoring” (manufacturing and sourcing components and raw materials within a group of countries with shared values) will reconfigure many supply chains, with seaports on the East Coast reaping the benefits, she says.

According to DeNight, industrial vacancy in Northern New Jersey and the Los Angeles markets has been tight for years and acutely low for the past year, forcing users to essentially react at the speed of new construction due to strong competition for space. Ports like Savannah and Houston have more space to offer. Savannah, in particular, is the fastest-growing port market in the country, with a construction pipeline measuring nearly 30 percent of its existing inventory, DeNight adds.

However, as a result, smaller, secondary ports are now experiencing tremendous rent growth too. According to Colliers research, the port of Charleston led rent growth at smaller ports over the past year, with an 83.4 percent increase since the third quarter of 2021. It was followed by the ports of Baltimore and Tampa Bay, in Florida, where rents grew by 59.2 and 57.7 percent, respectively. Rodriguez notes that the Panama Canal expansion has positively impacted other U.S. ports, namely on the East and Gulf Coasts.

At the same time, high rents at bigger ports are not the main reason for the movement of tenants to secondary ports, according to Greek, who says that smaller ports on the East and West Coasts are getting increased traffic due to warehouse availability, along with supply-chain and labor issues that are causing back-ups at major ports of call, such as the recent labor dispute at the Port of Long Beach that left 100 ships backed up in the harbor.

Initially, some Asian shippers redirected traffic to the Port of New York/New Jersey, he notes, but now they are looking for different points of ingress without backup issues, which is benefiting Savannah, Charleston, Philadelphia, Tampa and Houston on the East Coast and San Diego, Vancouver and San Francisco on the West Coast. Additionally, the Port of Miami, which has traditionally served traffic from the South and Central Americas, is now seeing ships from Europe and Asia.

The two-year supply-chain upheaval has also caused some tenants to diversify ports of entry or relocate operations to alternative ports altogether, DeNight says. “Though not every tenant can or would make a shift, there has been notable outflow from the tightest port markets, driven by costs, space availability concerns and supply-chain resiliency.”

“The scarcity of available space is the bigger reason some tenants may be getting boxed out of opportunities in primary port regions, though the recent shipping shift may also be causing logistics companies and retailers to reassess and possibly redirect their industrial real estate requirements,” notes Matthew Dolly, national industrial research leader at real estate services firm Transwestern.

But while rents have grown astronomically in the biggest port markets, users still want and need to be there to have access to the largest population centers in the country and the easy availability of labor, he adds. They will also often absorb increasing rents to avoid the much higher transportation costs of distributing to locations much farther away, Dolly notes.

Tenants may also still prefer the bigger ports because of the efficiencies provided by their sophisticated offload logistics infrastructure, which is still in buildout mode at secondary ports, adds Ressler.

When space is unavailable close to ports industrial end-users, investors and developers look in the next ring out, according to DeNight. She notes that the “next ring” of established and emerging markets are seeing a jolt of activity in tenant demand, development and rent growth. “The Inland Empire, for example, is a mature, primary market that plays ‘catcher’s mitt’ to Los Angeles, but the area has seen vacancy dwindle to less than 1 percent, despite a significant development pipeline as tenants keep pushing inland to try to secure space,” she says.

On the East Coast, the I-81/78 Corridor in Eastern Pennsylvania and South New Jersey are increasingly welcoming tenants priced out of or unable to find space in Northern Jersey, DeNight adds. A similar dynamic is playing out in emerging logistics hubs like Greenville/Spartanburg, with demand growing partly to support increased activity resulting from expansions at the Port of Charleston.

Markets less than a day’s drive away from ports, such as Phoenix on the West Coast and Savannah, Atlanta, Central Florida and Charlotte, N.C. on the East Coast, are seeing increases in industrial leasing volumes, says Rogers. The Phoenix market, in particular, is seeing an influx of industrial activity as it continues to attract tenants squeezed out of the Los Angeles market.

Phoenix had nearly 45 million sq. ft. of industrial space under construction as of late September, an equivalent of 15.1 percent of existing stock, according to Ressler, with projects planned that could double the pipeline.

Houston has led the U.S. in occupancy growth during the past 12 months and ranks third in the nation for industrial space under construction.

Charleston, S.C. is also gearing up for a major industrial expansion, while Miami has seen its industrial construction levels double over the past two years, Dolly adds.