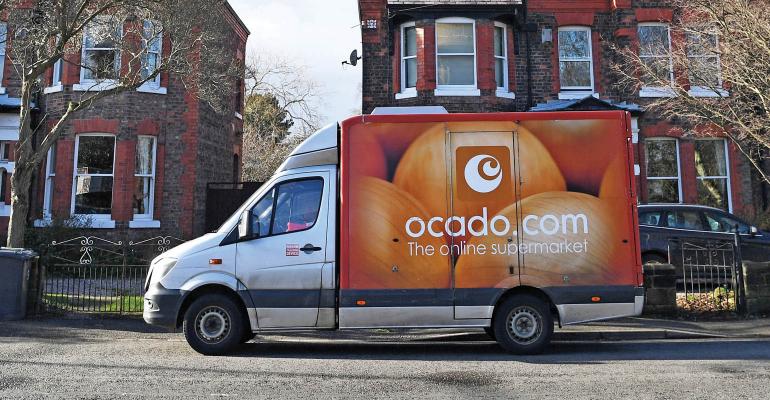 The pandemic has exposed some flaws in relying heavily on state-of-the-art robotic warehouses.

(Bloomberg Opinion)—This should have been Ocado Plc’s crisis.

The online-only grocer should have been capitalizing on shoppers avoiding crowded stores. Instead, last week it temporarily closed its website, potentially upsetting its customers.

Still, investors clearly believe that it will emerge as one of the winners from the rush to buy toilet paper and tinned soup. As of Friday, Ocado’s shares were up for the year.

But the pandemic has exposed some of the flaws in the group’s business model, which relies heavily on large, state-of-the-art robotic warehouses. Others, such as Walmart, take a more low-tech approach, fulfilling grocery orders from stores, where employees pluck packs of sausages and cereals from shelves for delivery to home or collection from supermarkets. When demand surges, it is much quicker and easier to ramp up the rate of grocery orders from stores compared to warehouses. As long as there are enough loaves of bread and toilet roll, more employees can simply put them into crates to be delivered to homes. In contrast, building and stocking automated warehouse is time-consuming and expensive. That makes Ocado’s business model less flexible.

The debate about which approach is best is about to cross the Atlantic. In 2018, Ocado struck a deal to run the online grocery operations of Kroger Co, the U.S.’s second biggest grocer after Walmart. The two U.S. food retail giants will be taking diametrically opposite routes to meeting online demand, which was expected to grow anyway even without the pandemic. We’ll have to see which ultimately wins out, although right now, the ability to quickly scale up and exploit stores looks to have a lot of advantages.

Ocado Retail, which is now a joint venture with British high street stalwart Marks & Spencer Group Plc, said last Thursday that so far, sales growth in its second quarter was running at twice the rate of the 10% expansion in the first three months of the year. But sales could have been up 50-100% — if Ocado had enough room or robots to pack more orders.

Part of this is bad luck. Just over a year ago, the company suffered a catastrophic fire at its cutting edge facility in Andover, shutting down a space that would have been able to fulfill 60,000 orders a week. It has since clawed back some extra capacity at another facility that was being used by Wm Morrison Supermarkets Plc, its first online partner. But it hasn’t been able to make up all that was lost.

In contrast, Morrison, which sells through its own website and Amazon, is roughly doubling the number of stores that fulfill online orders to about 100. This isn’t all bad for Ocado, as Morrison’s own website will still use its technology to pick orders. But it does underline the greater flexibility of the old-fashioned approach.

Brick-and-mortar grocers have another advantage too: They can be used as pick-up points for customers. In the U.K. this is known as “click and collect”; elsewhere, it's curbside or same-day pick-up. This is a strategy that Walmart has embraced successfully, as it already offers pick-up from 3,200 stores and will add another 500 locations this year.

But Ocado is committed to its automated warehouse model, as it believes this delivers the best returns — even though the group has only made a pre-tax profit in a handful of years. The group does also have more traditional warehouse space due to open in the next year or so. And it has other alternatives that it should draw on. For example, it is building a facility in Bristol, which is about half the size of a normal warehouse and takes half the time to construct, around a year. Putting more emphasis on smaller hubs like this, and seeing whether they can be shrunk further, would be wise. This would enable facilities to be built more quickly, making the model more nimble.

Another thing the online grocer should think about: It doesn’t have a facility for click and collect right now either. It should explore ways of adding this. From its partnership with Marks & Spencer, Ocado now theoretically has access to a large store estate.

Even when this pandemic passes, it will leave a long-lasting impact on the way we purchase. Ocado should learn its lessons now, and adapt its business model accordingly, so it doesn’t have to shut up shop next time there is a crisis.

--With assistance from Elaine He.

To contact the author of this story: Andrea Felsted at [email protected].

To contact the editor responsible for this story: Nicole Torres at [email protected].