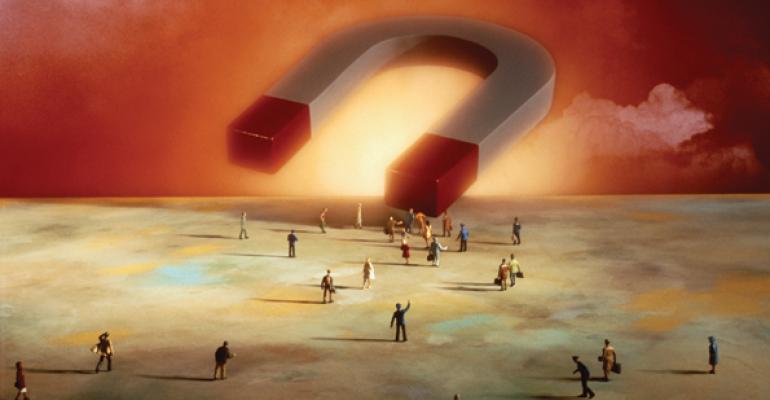 No Man Is an Island

Independent broker/dealers are dressing up their offerings to attract and retain advisors tempted to start their own RIAs.

When financial advisors Fred Miller and Winfield Smathers IV decided to leave their brokerage Hunter Associates, they considered starting their own registered investment advisory firm and placing their $350 million in assets with a custodian.

Like many advisors, they were looking to be compensated for their advice under the RIA model, with all the freedom and flexibility that promises.

Normally this would be a win for the RIA channel and the custodians that support them like Schwab or TD Ameritrade. But in the end, the duo didn’t want to completely give up their commission business, so they found a home at Raymond James Financial Services in the firm’s independent contractor division. They could put their fee-based assets with Raymond James’ corporate RIA and continue to serve their smaller clients on a brokerage basis.

The ascendency of the RIA model at the expense of the traditional brokerage is practically a given in this industry,  but independent broker/dealers are fighting back. Several of the largest independent broker/dealers (IBDs), including Raymond James, Commonwealth, Securities America and LPL, have rolled out new programs looking to compete with the likes of TD Ameritrade and Schwab to both attract and retain advisors.

They have little choice as the industry evolves. IBDs have seen traditional revenue dry up thanks to continued low interest rates and still-cautious retail investors, while higher technology and compliance costs eat into profits.

Add to that the flow of advisors away from the traditional brokerage model and things are bleak. The RIA ranks are expected to rise 6.3 percent in the next four years while IBD and wirehouse advisors will decline 4.3 percent and 2.5 percent respectively, according to Cerulli Associates. Recent big moves: the Coppell, Texas-based CFO4Life LP recently left LPL Financial and put the majority of their $500 million AUM with TD Ameritrade. In 2011, Brad Griswold left LPL to launch his own $250 million RIA with Schwab, while TD lured five advisors from Commonwealth with a combined $1 billion in assets.

“Just by sheer numbers, how the RIAs have grown, you would think it’s a smart move [for broker/dealers] to put that offering there,” says industry consultant Alois Pirker of Aite Group.

Whether it’s getting into the custody business or becoming a service agent with an existing custodian, their efforts are starting to pay off. Consider that in the first quarter of this year, LPL fell short of its recruiting goal with a net new 25 advisors compared to 182 new advisors in the fourth quarter of 2012. Yet the firm doubled assets in its RIA custody unit—which began in 2008—last year, reaching $50 billion.

The trend is one reason Commonwealth Financial Network recently announced a partnership with National Financial, the firm’s custodian, to offer an RIA-only affiliation.

“We had an awful lot of advisors who said, ‘We adore Commonwealth; we’re frustrated with working in a FINRA-dominated world, and we’re 97, 95, 98 percent fee-based,’” says Andrew Daniels, managing principal of business development at Commonwealth. “‘We want to continue to use you as a service provider, but we want to drop our Series 7.’”

It’s not that easy for these firms to build out a custody business, says Matt Lynch, principal of Tiburon Strategic Advisors in Tiburon, Calif. Whereas large custodians such as Fidelity and Schwab are household names with deep pockets, the challenge for smaller b/ds in building out custodian capabilities is whether or not their efforts will be accepted by the reps and their clients, he says.

“I just don’t see [advisors] going in and saying, ‘We’re going to move from BNY Mellon or Pershing or Schwab and move all the accounts internally to our company-owned custodian,’” Lynch says.

So IBDs are addressing the RIA market by offering some of the functions that custodians do without actually holding the assets.

Commonwealth hopes to replicate much of the support and services advisors can find at the custodians by providing reporting, fee transactions, billing and trade execution while giving advisors research and practice management strategies, says Daniels. The firm will also help advisors with required minimum distribution questions and make sure the model management tool is working, while National Financial holds the assets.

“Technically, we’re not in the custody business,” Daniels says. “But we are absolutely competing in the same space as the TDs, the Schwabs and the what-have-yous for registered investment advisor business.”

Arbor Point will serve hybrid advisors who want to own and operate their own privately branded firm, but don’t want the operations and compliance burdens, according to Curtis Reed, president of Arbor Point. In contrast to operating under Securities America’s corporate RIA, advisors would be able to use multiple custodians, such as TD Ameritrade, Schwab and Fidelity Institutional.

On the commission side, advisors will be paid on a traditional grid, similar to other b/ds. On the fee-based side, however, advisors will get 100 percent payout. Arbor Point will charge an administrative fee ranging from 10 to 25 basis points, depending on the advisor’s size and number of accounts, for services including new account processing, fee billing and performance reporting. Securities America provides commission-based business processing and overall compliance and supervision, as well as practice management and retirement income distribution.

With the popularity of the hybrid model, IBDs may be in an even better position from a recruiting standpoint. The dually registered advisor channel, or hybrid channel, had the largest growth rate in both assets and advisors in the past year, and only 17 percent of dually registered advisors (who have their own RIA) plan to eventually drop their b/d affiliation, according to Cerulli.

“At the end of the day, the pure independent RIA space is occupied by big players,” Pirker says. “When you enter as a broker/dealer in that space, you really want to address that niche that the pure play custodians have a hard time addressing because they are not [a] brokerage firm the advisor can use for commission business.” Flexibility is the selling point. “If you want to run a part of your business that way, you’re not necessarily forced out the door as you were before,” he says.

In fact, many advisors who broke away are realizing the benefits they enjoyed at a b/d—sometimes too late, says Jodie Papike, executive vice president of Cross-Search.

Smathers and Miller are a case in point. The deciding factor for Smathers to join Raymond James was the firm’s recent move to a new compensation model: He and his partner will retain 100 percent of their advisory fees while paying a quarterly fee to the b/d, a similar structure to how pure RIAs are compensated. “That change definitely makes becoming your own RIA a much more difficult decision because [under the Raymond James’ model we will be] compensated very similarly, without a lot of headaches,” Smathers says. 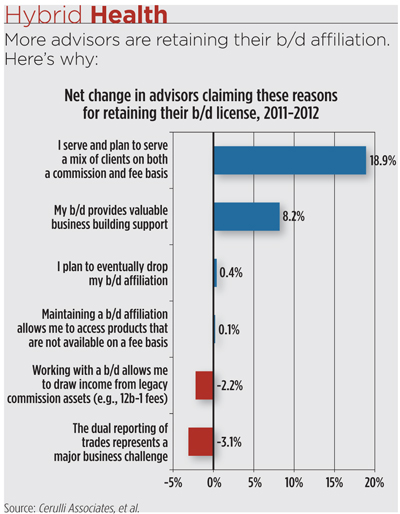