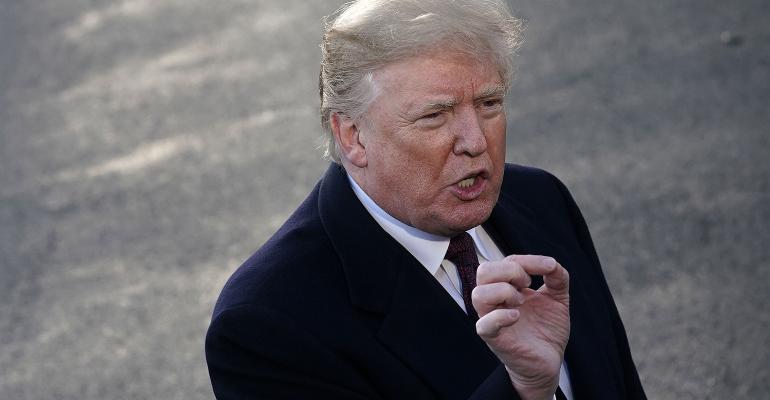 Attempts to reduce regulatory burden have had only modest effect.

From the campaign trail through present day, President Donald Trump and his administration have promised to reduce the yoke of government regulation. While much attention has been given to the 2017 tax reform and the impact it’s having on estate planning, a review of the regulatory reform of transfer tax provisions shows a more modest impact.

The president issued several executive orders aimed at regulatory reform and elimination of inapplicable and excessive regulations. Executive order 13789 directed the Internal Revenue Service and Treasury to take actions to reduce the taxpayer burden of existing tax regulations, and the Secretary of the Treasury was directed to review all significant tax regulations issued on or after Jan. 1, 2016. This effort ultimately resulted in the withdrawal of the controversial proposed Internal Revenue Code Section 2704 regulations (the proposed Section 2704 regs) that were put forward during the Obama administration. In addition to the Treasury’s reports recommending action on such regulations, the IRS and Treasury initiated a review of all regulations, regardless of when they were issued, resulting in the issuance of a Notice of Proposed Rulemaking published in the Federal Register on Feb. 15, 2015. The notice identified 298 Treasury regulations for removal and identified 79 other Treasury regulations for corresponding amendments. Treasury Decision 9849, issued on March 14, 2019, contains final regulations removing 296 of the 298 Treasury regulations that had been proposed to be removed and amends the 79 other Treasury regulations previously identified.

While the elimination of inapplicable regulations is a favorable development in terms of avoiding unnecessarily voluminous regulations, the practical impact of the final regulations will be minimal to nonexistent. In directing each agency to form a Regulatory Reform Task Force, President Trump's executive orders instructed agencies to review regulations and identify regulatory burdens that, among other characteristics, have adverse impacts on jobs, are outdated or unnecessary, impose greater costs than the benefit conferred or create a serious inconsistency. The Treasury Regulatory Reform Task Force's particular focus is to identify tax regulations that are “unnecessary, create undue complexity, impose excessive burdens, or fail to provide clarity and useful guidance.” By design, the regulations that have been eliminated are those that have “no current or future applicability” and therefore no longer provide “useful guidance.” As such, this particular regulatory initiative will have little effect in the transfer tax context and won’t result in a reduction of taxpayer burdens.

To date, the most notable regulatory action by the Trump administration was the withdrawal of the proposed Section 2704 regs, which provided that certain restrictions on liquidation are disregarded in determining the fair market value of a transferred interest and authorizes promulgation of regulations that disregard additional restrictions having the effect of reducing the value of a transferred interest for transfer tax purposes. The proposed Section 2704 regs were published on Aug. 4, 2016, which included new disregarded restrictions, addressed control of limited liability companies and eliminated discounts under certain circumstances. The Treasury and IRS received numerous comments on the proposed Section 2704 regs, with many comments raising concerns that they were overbroad and unworkable. In response to executive order 13789, the Treasury and IRS issued Notice 2017-38, which identified the proposed Section 2704(b) regs as meeting the criteria outlined in the executive order. They were then withdrawn on Oct. 20, 2017.

Progress has been made in terms of necessary regulatory guidance issued in response to the 2017 tax legislation, though there’s additional work to be done. The recently published proposed regulations under IRC Section 2010 provide that taxpayers can take advantage of the increased exclusion amount effective until the end of 2025 without the fear of a “clawback” on death, which had been a concern raised by commentators. Further, though a corollary to transfer tax planning, the IRS has indicated in IRS Notice 2018-61 that it will be issuing favorable regulations related to Section 67(e) trust and estate administration expenses.

Aside from the cleanup of obsolete regulations and the promulgation of needed guidance given the changes made by the 2017 tax legislation, several projects that have been outstanding since the prior administration still remain unaddressed. Whether future regulatory reform projects will provide needed guidance on long-standing items in the transfer tax world remains to be seen.