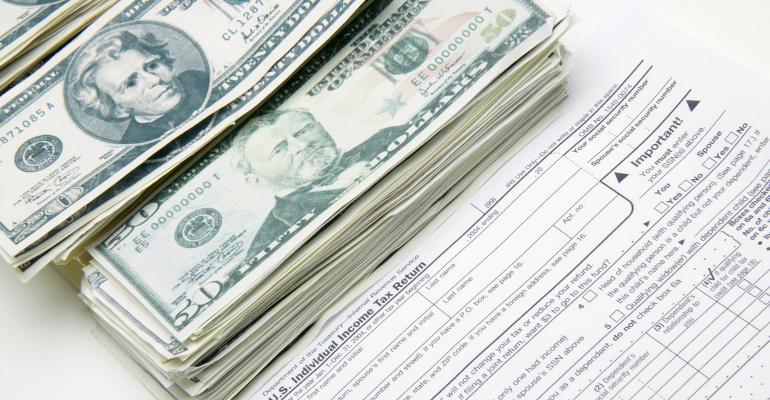 Your clients can save a lot of money—if you act quickly.

(Bloomberg) --At the end of every year, millions of Americans can make strategic moves to shave a few bucks off their April tax bill. Right now, millions more should be able to get into the act, with Congressional Republicans poised to pass a 503-page law that fundamentally restructures the U.S. tax code.

If the bill passes, new tax rates and countless other provisions would go into effect on Jan. 1. Most of the old rules though would still apply in the last two weeks of 2017—and that gives individuals a shrinking window of time to employ strategies that would lower their taxes for next year’s tax season. (While the legislation would take effect in the new year, it won’t be reflected in your tax forms until the 2019 tax season).

So, here are suggestions from accountants, financial planners, and other tax experts on how to make the most of this opportunity. Keep in mind that the best advice depends specifically on how you’re going to be affected by the tax bill. While most Americans would get a tax cut in the short term, some taxpayers could see higher tax bills in 2018. “No individual is average,” Suzanne Shier, a tax strategist at Northern Trust Corp., reminds us. “An average is a composite of multiple individuals.”

If your taxes are set to spike in 2018, many of these strategies won’t work as well. But if you’re part of the majority who will see an initial tax benefit from the law, there could be big benefits for acting soon.

A typical piece of end-of-the-year advice is to increase your potential deductions before Jan. 1. Deductions claimed for things you did this year will lower tax bills due the following April. Wait until January, and you’ll need to cool your heels for more than a year to get the benefit of deductions claimed.

This year, beefing up your charitable giving could be even more effective. If your tax rate is falling in 2018, your deductions are more valuable if claimed against this year’s income. Giving to charity, a tax deduction that’s preserved under the tax bill, is an effective way to boost your 2017 deductions on short notice.

And even if your tax rate is going up next year under the new bill, you may still want to make a bunch of charitable donations in 2017. Most deductions, including the charitable one, can only be claimed if you itemize your tax return. The bill would sharply limit the number of taxpayers who would benefit from itemizing: First it raises the standard deduction from $6,350 to $12,000 for single people, and $12,700 to $24,000 for married couples. Second, it limits other deductions—most famously for state and local taxes—so it’s harder for taxpayers to reach the threshold where itemizing makes sense.

So, you might want to think about making several years of charitable donations this month if you can afford it, said Philip “Rusty” Ross, a financial adviser at Exencial Wealth Advisors based in Oklahoma City. If you’re not sure where to donate, you can open a donor-advised fund and decide later where your money will go. But move fast—there are only two weeks left in December.

Another traditional recommendation for this time of year is to defer income. While salaried workers generally can’t choose when they get paid, business owners can often delay registering income until the following year, lowering their April tax bill in the process. Investors can also control their taxable income—and thus lower capital gains tax bills—by selling losing stocks or waiting to sell winning stocks until 2018. In most years, deferring income merely delays the taxes you will have to pay eventually. But, if you expect your tax rate to fall next year, deferring income into 2018 could actually save you money. (There’s also some good news for equity investors when it comes to the FIFO rule.)

3. Pay Your Taxes—If You Can

As we noted, the tax bill would limit how much state and local taxes (or SALT) individuals can deduct, to no more than $10,000 of a combination of property taxes and either income or sales taxes. The move by the Republican-controlled Congress was criticized by Democrats as an effort to make citizens of high-tax blue states pay for benefits to corporations and citizens of low-tax red states. As a result, advisers had been planning to instruct clients targeted by this provision to find ways to maximize their SALT deduction in 2017, by pre-paying next year’s taxes as much as allowed and deducting them under the old rules. But the final compromise bill, unveiled Friday by Republicans in the Senate and House, explicitly closes this loophole with respect to income taxes. Any 2018 state and local income taxes paid ahead of time would nevertheless need to be counted on next year’s taxes, according to the bill. However, taxpayers could still pre-pay property taxes due in 2018, and deduct them under the old rules. Additionally, any taxes due for 2017—or any late taxes from previous years—could still be deducted on a tax return due this April.

Current tax law allows employees to deduct unreimbursed expenses related to their jobs as long as they’re more than 2 percent of income. The tax bill ends these itemized deductions after the end of this year. So, workers should think about whether they can pay —and get the receipts—for as many of these expenses as possible this month, said Kathy Pickering, executive director of the Tax Institute at H&R Block in Kansas City, Missouri. Examples of unreimbursed expenses for employees might include tools and supplies, occupational taxes, work uniforms, union dues, and expenses for work-related travel. Self-employed people and business owners would still be able to deduct expenses under the new tax bill.

5. Pay for Your Move

Under the proposed law, you’ll no longer be allowed to deduct work-related moving expenses after the new year (unless you’re in the military). Of course it might be difficult to schedule a cross-country move on such short notice, but, “if you did move, make sure you clear up any moving-related expenses by Dec. 31,” said Fordham University accounting and taxation professor Stanley Veliotis. And if your destination happens to be a low-tax red state, maybe thank Santa Claus for your good luck.

After Jan. 1, individual taxpayers will no longer be able to deduct tax preparation fees. Any payments to accountants or tax software companies made this year, however, should still be deductible on tax returns filed in April. So, you might want to buy a tax software package now, or try to get an appointment with your CPA before the end of the year. Keep in mind that, like unreimbursed employee expenses, tax prep fees are deductions that only make sense if you itemize and if total miscellaneous deductions exceed 2 percent of your income.