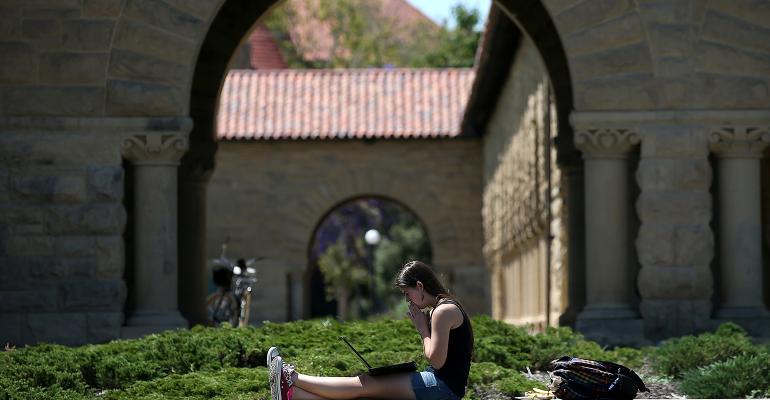 For Rich College Donors, a Favorite Tax Break Is Now in Danger

The Republican-controlled Congress may require that a quarter of gifts to the wealthiest colleges be used for middle-class financial aid or they won't be tax deductible.

As these 2016 commitments attest, the super-rich often slim their tax bills by swelling the coffers of their alma maters through donations for pet projects. Now, under a tax overhaul in Washington, the tax benefits of such gifts could be curtailed. That prospect is alarming the ranks of the .01 percent and their favorite charities.

The Republican-controlled Congress will soon be considering a plan that would require a quarter of gifts to the wealthiest colleges be used for middle-class financial aid. Otherwise, the donations wouldn’t be fully deductible, and the schools risk their charitable status.

Through his tax proposal, U.S. Representative Tom Reed, a Western New York Republican and vice chair of President-elect Donald Trump’s transition team, is taking aim at the richest schools. The plan would apply to the roughly 100 colleges with endowments exceeding $1 billion. Reed wants to make sure those institutions, where annual costs can top $60,000, offer steep discounts to families with annual incomes of $24,000 to $145,000.

“I understand donors’ intent, trying to control where money goes,” said Reed, who also wants to increase the deduction for gifts providing middle-class tuition aid. “At the same time, we have a college cost crisis. In order to get through the crisis, these are the hard decisions we have to make.”

If Reed had his way, the cancer-research gift from Ellison -- the Oracle Corp. co-founder whose children graduated from USC -- wouldn’t have been fully deductible. USC, in Los Angeles, has a $4.6 billion endowment.

“This kind of restriction will not address the cost of higher education,” said USC President C.L. Max Nikias.

Some worry the approach will shortchange other urgent needs. Andrew Bursky, founder and managing partner of Atlas Holdings, an industrial company, and his wife have, in fact, given toward financial aid to Washington University in St. Louis, their alma mater.

Recently, though, they pledged $10 million for cancer and auto-immune research. Without the tax break, he might have given $6 million, his cost for the donation.

“Let’s not dis-incentivize those who are prepared to give. I’d hate to sacrifice, in my case, medical research that holds the promise of dramatically changing the human condition,” said Bursky, a trustee of Washington University, which has a $6.5 billion endowment. “Unintended consequences can be severe.”

The arts could suffer, too. Last month, the University of Rochester in New York received a $5 million commitment from two alumni for the construction of a new theater on campus. That gift wouldn’t have been fully deductible under the congressional plan.

“We all agree that we need to pay attention to cost and ensure that the middle class can fully participate in a way they can afford,’’ said Tom Farrell, who oversees fundraising at Rochester, which has a $2 billion endowment. “Pursuing that resolve through a narrow approach with endowments over $1 billion might not be the answer.”

The restrictions have the potential to reorder the world of philanthropy. In the year ended June 30, 2015, colleges raised a record $40 billion in gifts. Education accounts for 15 percent of all U.S. charitable giving, the biggest slice after religion.

The wealthiest institutions get far more than their share. At the top of the heap, Harvard University, with its $35.7 billion endowment, raised $1.2 billion in the year ended in June -- a school record.

Lawmakers from both parties have long pushed for colleges to spend more on aid and cut costs, especially after hearing about extras such as gourmet food and luxury dorms.

Colleges say donors often place restrictions on their gifts, so their endowments can’t be legally shifted to other priorities. Many rich schools already offer substantial aid to the poor. Harvard says it gives aid to families making more than $200,000 a year.

Edelman, the Rowan University donor, has no problem with the tax restriction. He and his wife are giving to create a museum and research space on the 65-acre fossil site near their alma mater’s campus in Glassboro, New Jersey. Rowan has a $173 million endowment. So, now or later, gifts like Edelman’s would be tax-deductible.

“If you want to make a contribution to an absurdly wealthy endowment, then neither you nor the endowment should enjoy a special tax treatment under the Internal Revenue code,” Edelman said.

Chuck Collins, a senior scholar at the Institute for Policy Studies, a Washington think tank, said it was time for a public debate on such gifts.

“We treat all these donations the same from a tax point of view,” said Collins, co-author of a November report on the concentration of wealth at colleges, "whether you are feeding a hungry child in Baltimore or adding a state-of-the art video editing suite at your kids’ private elite school.’’