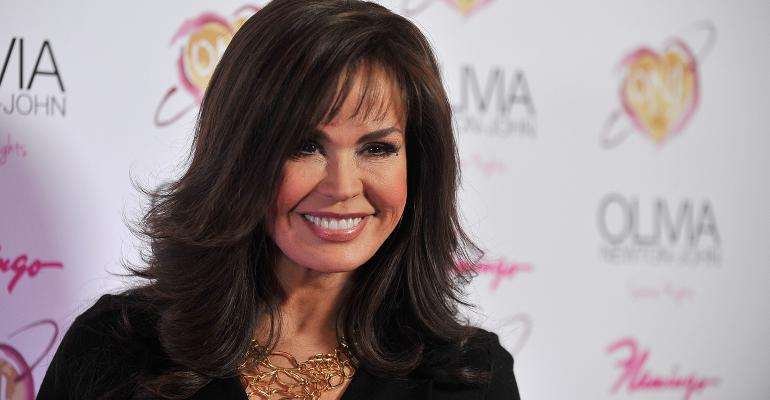 The case for giving away a fortune.

When we’re dead and gone, the only thing that remains is our reputation. Some of us may be immortalized by our creations on the silver screen or our musical back catalogue; others by the buildings we’ve designed and built; others still by the results of our political careers or scientific achievements, by finding the cure for illnesses or saving species. But for most of us, it’s our reputation that will outlive us—and what we do with our wealth as we shuffle off this mortal coil may impact that reputation as much as anything that we’ve done throughout our lives.

Marie Osmond is a singer and a member of the famous large musical family. I can still see my 13-year-old self singing along on a Sunday afternoon to The Osmonds, a TV show featuring Marie and her brother Donny, back in the United Kingdom. Marie now has children of her own, ages 17, 20, 22, 23, 30, 32 and 36. She has a fortune of about $20 million generated mostly through her musical career. So far so good for an excellent reputation. But she has recently publicly stated that none of her children will be inheriting any of her fortune, citing that to do so would do them a great disservice.

To Give or Not to Give?

Should she be pilloried or applauded? Is cutting her kids out of her will the same as throwing them out into the cold? Or by severing the purse strings, is she allowing her children to fly free? Is she harming her own precious reputation by denying her children the fruit of her labors? Or is she in fact enhancing that reputation by generously looking beyond her own family when it comes to the beneficiaries of her amassed wealth?

Withers’ 2019 Attitudes to Wealth report gathered insights into what the wealthy are doing to address the social challenges around the world and analyzed the rationale for their actions. It found that the desire to pass on wealth to children is a fundamental sentiment—but it also heard a concern that inheritance can psychologically damage children. While some wealthy individuals might fear that disinheriting their children might damage their reputations as selfish parents, the report shows that there’s a growing belief that ironically, keeping it in the family can itself be seen as a selfish act. And that can be equally damaging of a person’s reputation.

Wealthy parents before Marie Osmond have trod the path of child disinheritance, and for a variety of reasons. In 2010, billionaires Bill Gates and Warren Buffett created The Giving Pledge—also colloquially known as the “donation oath”—encouraging extremely wealthy people to contribute a majority share of their wealth to philanthropic causes. It has more than 200 signatories and, according to a Wealth-X report, could be worth $600 billion by 2022. That’s a lot of money to spend on charitable causes and philanthropic endeavors, rather than fast cars and designer shoes.

But what are the reputational repercussions of disinheritance? Marie Osmond has said that giving her children an inheritance would be to do them a disservice. But is it not in fact a disservice to deprive those children of the fortunes that their parents built up during their lives? Doesn’t that just make them bad parents, to be rightly lambasted as a result? Charity begins at home perhaps, but it seems that the wealthy are starting to see that “home” in fact constitutes our wider society and this blue planet, both of whom desperately need the help of those rich enough to give it. As a result, many high-net-worth individuals are recognizing the huge, life-changing influence that their wealth can achieve beyond their own front door and are acting upon it. Rather than negatively impacting their reputations as neglectful parents, their good standing is being enhanced both by their understanding of the benefit that can be achieved by their greater generosity, and as a result of their recognition for the harm that simply handing over huge amounts of wealth can do to their offspring.

Parents can have both a wealth of affection for and responsibility toward their children, yet still properly prefer to use their actual wealth beyond their own flesh and blood, keeping intact their reputations as good parents and as contributing members of society.

A neglectful parent should be roundly criticized. Their reputations are justifiably besmirched when they fall short of the basics of parenthood—doing their upmost to raise healthy, happy children and launching them into the world as positive members of society. But absent spite, cruelty or vindictiveness, those who choose to leave their wealth to be used at their own bidding rather than at the whim of their offspring shouldn’t be condemned but commended.

The children of wealthy parents will usually have benefited from day one, born with a silver spoon in their mouths, receiving top-notch education, mixing with the great and the good, having all manner of doors opened for them with the golden key of wealth or celebrity. Wealth can create a high diving board for youngsters to launch themselves and create successful lives for themselves. But the administration of care, comfort and understanding are equally important roles for Mom and Dad. The recently departed Kirk Douglas didn’t leave any of his $61 million fortune to his son Michael. But from the manner in which Michael announced his Dad’s death, it’s clear that this father left his son an inheritance of love—and seemingly thriving off this, Michael has amassed his own fortune of more than $200 million.

Disinheritance as Symbol of Love

Some wealthy figures see disinheritance as a positive act of parenthood, protecting their children from the negative sides of opulence. Sir Elton John reportedly favors charitable donations over parental handouts to encourage respect for work and money. Simon Cowell has been reported as saying that “Your legacy must be to give people many opportunities. If you give them your time and teach them, it will be the greatest inheritance,” while the pragmatic explanation to his son’s disinheritance by Jackie Chan was, “If he is capable, he can make his own money. If he is not, then he will just be wasting my money.”

The American businessman Harvey Mackay said, “You can’t buy a good reputation, you must earn it.” The world is in a parlous state; with the depletion of its natural biodiversity and with people suffering across the world from famine, flooding and fire, from disease and despair, from war and want. Many extremely wealthy individuals are putting their money where their charitable mouths are, espousing environmental and humanitarian causes during their lifetimes and continuing that financial generosity on and beyond their deaths. They’re not looking to buy their good reputations—for the most part they’ve already achieved them—but they’re earning them with the thoughtful placement of the funds that they themselves have earned.

True enough, some disinheriting may not be for laudable purposes at all, but done out of spite or selfishness. And disinheritance can backfire. The actress Joan Crawford deleted two of her adopted children from her will—and leaving Christina nothing, left her with one thing to do, write the biography Mommie Dearest, which evidenced Crawford as a cruel parent more concerned with her fame and fortune than her children. She may have been a beautiful siren of the silver screen with awards under her elegant belt, but the reputation bequeathed her in the book and the film as a result of her disinheritance, survive her today.

Failing to meet a child’s basic needs is child neglect—a form of abuse, and anyone convicted of abuse of their children—young or adult—or of refusing to provide for vulnerable dependents may rightly face public approbation and reputational damage. But failing on one’s death to shower offspring with the rewards of one’s own hard work doesn’t come close to neglect and should not justify ripping a reputation to shreds. Charity begins at home but should not end there. We should be slow to vilify those who seek to do more with their money than keep it in the family, and quick to lionize those who see beyond their own four walls.