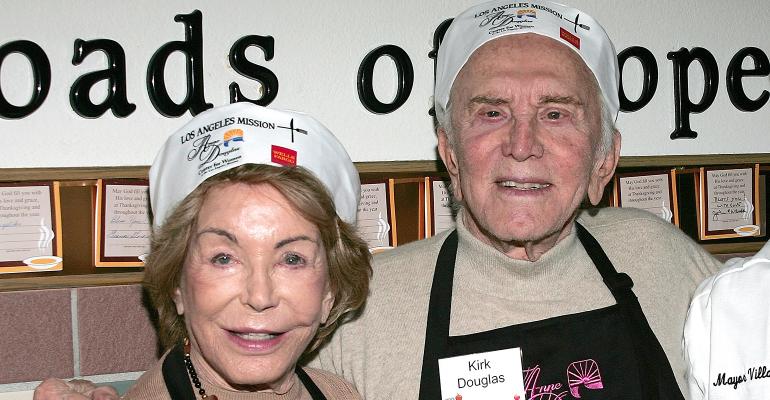 A lifetime of donations to good causes.

Legendary actor Kirk Douglas, who passed away earlier this month at age 103, has left the majority of his estimated $61 million fortune to charity. According to a new report by The Mirror, $50 million will be distributed to St. Lawrence University (Douglas’ alma mater), Sinai Temple of Westwood, the Kirk Douglas Theatre and Children’s Hospital Los Angeles, all of which he and his wife, Anne Douglas, have donated to before through the Douglas Foundation. Anne, age 100, still serves as the managing trustee. The purpose of the foundation, according to its website, is “to help those who cannot otherwise help themselves.”

The son of Jewish immigrants, Douglas endured an impoverished childhood and was a long active philanthropist during his lifetime, donating to various schools, medical facilities, and nonprofit causes and organizations as a way to give back, including to his former high school in his hometown of Amsterdam, N.Y., and causes around Southern California and in Jerusalem.

No Inheritance for Michael

It’s unclear where the remaining amount of his fortune will go, although it’s been reported that his son Michael, also a famed actor, won’t inherit (no mention was made of whether his other two less famous sons were included in the will). Unlike many other stories of family rifts causing disinheritance, that doesn’t seem to be the case here. Michael posted a touching tribute to his late father on Instagram praising his legacy as an actor and philanthropist. And with a reported $300 million fortune in his own right, it doesn’t seem likely that Michael needed the additional funds.

It is with tremendous sadness that my brothers and I announce that Kirk Douglas left us today at the age of 103. To the world he was a legend, an actor from the golden age of movies who lived well into his golden years, a humanitarian whose commitment to justice and the causes he believed in set a standard for all of us to aspire to. But to me and my brothers Joel and Peter he was simply Dad, to Catherine, a wonderful father-in-law, to his grandchildren and great grandchild their loving grandfather, and to his wife Anne, a wonderful husband. Kirk's life was well lived, and he leaves a legacy in film that will endure for generations to come, and a history as a renowned philanthropist who worked to aid the public and bring peace to the planet. Let me end with the words I told him on his last birthday and which will always remain true. Dad- I love you so much and I am so proud to be your son. #KirkDouglas

It also appears that the decision to give away the fortune to charity doesn’t come as a surprise; in a 2015 interview with The Hollywood Reporter, Douglas and his wife discussed their foundation and the intent to put the money toward good causes. In the interview, Douglas praised his business-savvy wife who set up a trust decades ago. After finding out that the trust had accumulated $80 million at the time, Douglas said, “I want to give it away.”

In case you were wondering, the kind of generosity expressed by Douglas “does happen, but not very frequently,” says Jeff Swett, managing director, The Swett Group of UBS Financial Services in Boston. “Typically people will leave at least a portion of their wealth to their kids, or other family members if they do not have kids.”

According to Swett, the most common methods of gifting are through donor-advised funds (DAFs), charitable remainder trusts (CRTs) and direct gifts of highly appreciated stock. Swett went on to explain that all methods have their advantages, “so the most suitable solution often depends on the clients’ objectives and family dynamic. Clients enjoy the flexibility of DAFs and can make the gifting a family-oriented mission by designating the next generation as successor trustees. We’ve seen clients establish scholarships in their family’s name by paying out a certain percentage of the DAF annually. These types of DAFs can live on indefinitely and leave a meaningful legacy. CRTs, on the other hand, are useful when there’s a desire to gift the money to charity at a later date, but to receive current income for a number of years first.”

“Frequently we encourage clients to donate at least part of their wealth while they’re alive. That way they can enjoy the process and take pride in the benefits and smiles they bring to others,” added Swett.

As most estate planning professionals stress, Swett says it’s important to encourage family planning and involving the younger generations in the process as soon as possible. Not only does that help prevent any surprises but also allows the kids to take an ownership role in the gifting. “When it’s communicated effectively, the survivors are typically receptive and excited to contribute to their family’s charitable mission,” says Swett.