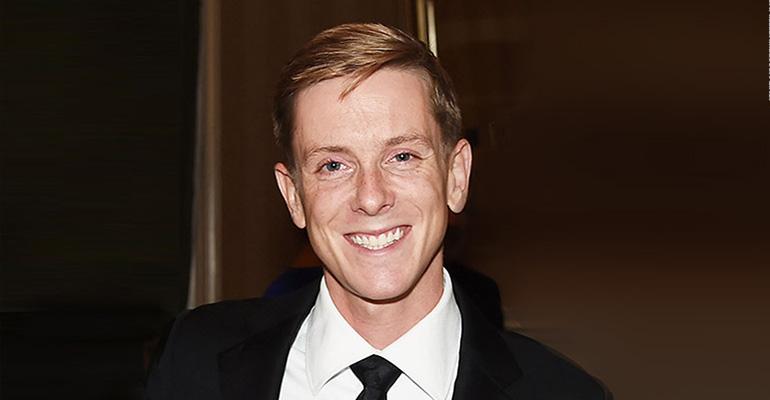 Meet the Facebook Co-Founder Who Wants to Tax the Rich

Chris Hughes thinks $290 billion a year is a small price to pay for equality.

(Bloomberg) --In his 20s, Chris Hughes co-founded Facebook Inc., helped elect a U.S. president, and made almost half-a-billion dollars. Then he turned 30 and, as he freely admits, his lucky streak came to an abrupt, high-profile end after a disastrous attempt to turn around the New Republic magazine.

Hughes, 34, now devotes his time to evangelizing for higher taxes on the rich, such as himself. He's proposing that the government give a guaranteed income of $500 a month to every working American earning less than $50,000 a year, at a total cost of $290 billion a year. This is a staggering number, but Hughes points out that it equals half the U.S. defense budget and would combat the inequality that he argues is destabilizing the nation.

The idea is being trumpeted by the Economic Security Project, a major recipient of Hughes’ philanthropy. At the nonprofit’s office near New York’s Union Square, Hughes sat down to talk about his new book “Fair Shot”—part memoir, part policy argument—and the lessons he’s learned from both success and failure.

Chris Hughes: I worked hard for three years, but the financial reward was wholly disproportionate from the work that I put in. I don’t think that there’s anything you can call that but a lucky break.

My case may be one of the more extreme. But a lot of people are getting very lucky because of the way our economy is structured. They’re working hard. They’re also getting very lucky. The janitor works hard to clean up their office at the end of the day. But because of the way that we structure the economy, the janitors haven’t gotten a raise in 40 years.

My point in using the word “luck” is to highlight the power of these macroeconomic forces that are creating these consistently massive windfalls for a small number of people, again and again—while everyone else is struggling to make ends meet.

Warren Buffett, Bill Gates and even Mark Zuckerberg have used this exact same language to talk about luck. It doesn’t get a lot of play when they use it, because they’re obviously all talented, ambitious, successful people. It’s a little easier to point to all the hard work that led to their financial reward.

Q: What are you focused on right now?

CH: What I’m doing all day is trying to make the case that income inequality is one of the greatest challenges of our time and that we have a moral obligation to eradicate poverty and restore opportunity to the middle class.

We talk about inequality—and the economy in general—in terms that make it seem like these are structural problems that we can’t do anything about. When in reality, we’ve created the rules of the road: the way the economy works now. The tax bill last year is one example of doubling down on trickle-down economics, which I think has been largely debunked and doesn’t work for middle-class and poor people but works very well for the top 1 percent and corporations.

Q; You hear more and more wealthy people talk about inequality, including hedge fund managers such as Ray Dalio. What do you think is driving that—the 2016 election results?

CH: Certainly, Trump’s election was a wake-up call to people on the left and the right that crazy ideas can very quickly enter the mainstream, and somebody like Trump can win the White House. There’s a sense that things are changing faster than people perhaps had realized.

Also, a lot of wealthy people are increasingly of the mind that the rewards that they’ve gotten are disproportionate with the time and work put in. These windfalls feel like they’re much more indicative of a winner-take-all kind of economy than they were 20 or 30 years ago. There are concerns about automation and how that’s going to change work. Then there’s just the very practical concern that, given that consumer spending is the biggest driver of economic growth in the United States and that median household incomes haven’t meaningfully budged in 40 years, the market highs right now might just be sugar highs.

I wish it were also the clear moral case. This is the thing that frustrates me—the idea that poverty is always going to exist. I wish that it were more people saying, “No. Actually, we can eradicate poverty.” That’s not to say that everybody is going to be a billionaire tomorrow. But we can ensure that no American lives in poverty. What we’re lacking is the political will. But I hope that that sentiment grows.

Q: To pay for a guaranteed cash income of $500 for workers earning less than $50,000 a year, you propose a 50 percent tax rate on income and capital gains for Americans earning more than $250,000. That might be a barrier to wealthy people taking this seriously, because the resources will have to come from them.

CH: There are many ways to pay for a guaranteed income. However, I do think that the resources can and should come from the people who most benefited from the structure of the economy. We had tax rates at 50 percent for several decades after [World War II]. In the same period, we had record economic growth and broad-based prosperity. I’m not making the case, in the book and in general, that we just need higher taxes. It matters what our tax dollars are going to. Cash is just the simplest and most efficient thing to eradicate poverty and stabilize the middle class.

People are craving big ideas that push the boundaries of what’s possible. When you talk about the skills gap and jobs of the future, the classic Democratic response is jobs training. Jobs training has a pretty checkered past. There are some programs that have worked. There are many that haven’t.

People are quite perceptive that those kinds of ideas are more band-aids than true responses to the underlying dynamics of the economy. Those are not going to fundamentally change the rules of the road.

Q: A crass question: Are you a billionaire now?

CH: No, I diversified out of Facebook somewhat quickly after the [initial public offering] lock-up in 2012-2013. Sometimes people ask me for financial advice. Somebody asked me a couple weeks ago what’s the one piece of advice you’d give an entrepreneur starting a company. I was, like, “You should ask an entrepreneur.”

Q: You mentioned in the book that you made a tax error before the IPO.

CH: I didn’t have tax advisers. I had no idea. It was not a tax-optimized thing to do. I paid ordinary income [tax] on all of my Facebook gains.

Listen, I have more money than I could have ever dreamed and feel very fortunate. But both my husband and I feel that we’re stewards of it. We’ve made a commitment to give away the money over the course of our lifetimes. For us, it feels like money that we want to use to make an impact. It doesn’t totally feel like our own.

Q: So you’re still really not focused on the investing side of things?

CH: No. We focus on giving it away. I’m not a professional investor. We have an investment management team that does it on our behalf.

Q: Talking about the New Republic, you wrote that your “blind ambition” was “so irrationally bold, that any cool-headed outsider could have seen how the story would end.” Is it hard to get that cool-headed perspective when you are the richest person in the room?

CH: If you’re the boss or you’re the [chief executive officer] or you’re the wealthiest person, you can and should think about the things that are going unsaid. In the New Republic case, it’s a little different. Plenty of people told me my expectations were too big. And I learned that there wasn’t a rabbit to be pulled out of the hat. The biggest long-term learning for me was that we didn’t need to go so bold, to shoot for the fences. The institution would have been better served with a more modest investment.

Q: But the experiences of your life had taught you to be bold, that boldness pays off.

CH: Very much. With boldness, with ambition, with smart people, with the money to invest, the sky was the limit. That was what the Facebook and Obama experiences taught me.

Q: As someone in the top 0.1 percent, do you feel you get access to better advice? Or do you have to beware of people taking advantage of you?

CH: Both. The wealthiest in America have access to investment advisers and sophisticated investment strategies that other people don’t have access to, which enabled the returns on capital to be as high as they are now. I also think there are lots of people selling snake oil to rich people and poor people alike. The difference is that the rich people can afford to buy it and make some mistakes here and there. Everybody else can’t.

To contact the author of this story: Ben Steverman in New York at [email protected]