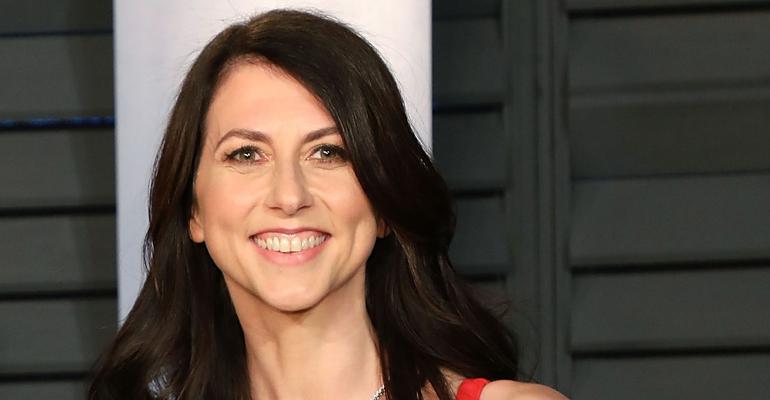 MacKenzie Scott Is Expanding Her $12.4B Giving Spree Globally

The billionaire philanthropist has increased her donations to nonprofits based outside the U.S., in countries ranging from Brazil to Micronesia.

(Bloomberg) -- MacKenzie Scott has transformed American philanthropy in the past three years by giving record amounts of money to often overlooked causes. She’s now stepping up her donations outside of the U.S., where her billions could have even greater impact.

Related: Celebrity Estates: MacKenzie Scott and the Future of Giving

Scott’s latest giving spree — $3.9 billion — included about 60 nonprofits based outside the U.S., out of a total 465 that received grants since last June, according to data compiled by Bloomberg.

They serve causes across five continents, from the small Pacific island nation of Micronesia to the slums of Rio de Janeiro. There was also an uptick in donations made to U.S.-based organizations that distribute funds globally, including to Ukraine relief efforts.

Scott, 51, has given away about $12.4 billion in 1,257 grants since she signed the Giving Pledge in 2019, a promise to donate most of her vast fortune to help solve social issues.

Read more: Here’s How Billionaire MacKenzie Scott Is Doling Out Her Fortune

The most recent grants are nearly double all of Scott’s past gifts to internationally based groups. Before March 23 announcement, fewer than three dozen of her nearly 800 grant recipients were based internationally, mainly in India and Kenya, according to data collected by Bloomberg.

What remains unchanged is Scott’s propensity for mystery and dropping transformative money bombs at organizations that didn’t see them coming.

‘Once in a Lifetime’

“Never in our wildest dreams we imagined it was MacKenzie Scott,” said Catherine Kyobutungi, an executive director at the African Population and Health Research Center, a Nairobi, Kenya-based nonprofit that got a $15 million grant, its largest-ever individual donation.

“That kind of unrestricted donation is a once-in-a-lifetime opportunity that will keep us going long term,” she said. “We’ve never seen anything like it.”

Scott, who didn’t reply to multiple messages seeking comment, said in a March 23 blog post that she and her team “seek a portfolio of organizations that supports the ability of all people to participate in solutions.” Her focus “included some new areas, but as always our aim has been to support the needs of underrepresented people.”

The former wife of Amazon.com Inc. founder Jeff Bezos is worth $53 billion, according to the Bloomberg Billionaires Index.

Just like her U.S. donations, Scott’s global targets cover a wide array of causes. Her fortune now funds efforts as diverse as improving public health in India, propping up young feminists in Latin America and protecting the Amazon rainforest. She also gave a $6 million gift to the Micronesia Conservation Trust, which manages biodiversity protection efforts in places like the Republic of Palau and the U.S. territory of Guam.

“We still don’t know how we got on her radar,” said Lisa Andon, deputy executive director at the MCT.

Out of the donations made to non-U.S.-based nonprofits, about a quarter went to Brazilian organizations. In Brazil, like in other emerging markets with weaker currencies, her dollar-denominated grants carry an extra punch.

Vera Cordeiro, 71, is a doctor who started a project in the 1990s to improve health care to Rio de Janeiro’s poorest families with nothing but a medicine cabinet and some food. Her Instituto Dara got a $1 million grant from Scott.

Scott’s first contact came through the Bridgespan Group, Cordeiro said, a nonprofit consultancy that advises philanthropists and has itself received a grant from Scott. The whole diligence process took about four months, she said.

Cordeiro hopes Scott’s donations will motivate wealthy Brazilians to get more involved in philanthropy. The country is the largest economy in Latin America but also one of the most unequal, with the richest 1% holding almost half of all the wealth in the nation, according to the World Inequality Database. It also has only a single signatory to the Giving Pledge.

“If our organization was created in the U.S., I wouldn’t have to be begging for money year after year,” she said. “MacKenzie Scott’s donation is a landmark, but where are all the Brazilian billionaires?”

--With assistance from Luana Reis, Guilherme Naldis and Sophie Alexander.

To contact the author of this story:
Felipe Marques in Sao Paulo at [email protected]