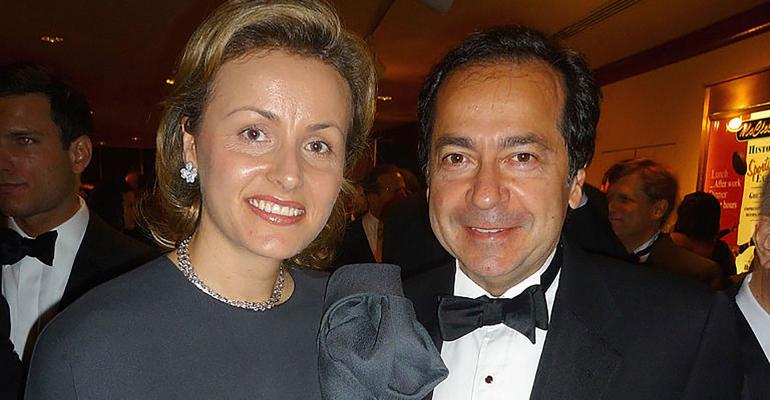 Maybe it’s all the time spent together during lockdown, but even billions of dollars can’t seem to help fix a marriage these days. The latest high-profile couple to call it quits is billionaire investor John Paulson, 65, and his wife of 21 years, Jenny. Paulson, who made some of his billions shorting the housing market before the 2008 crash, didn’t sign a prenup when he married Jenny in 2000, who worked as his assistant at the time.

Paulson amassed almost his entire fortune during the marriage, setting this up to be potentially one of the most expensive divorces of all times. According to Fox Business, Paulson’s stock portfolio includes a more than $750 million stake in Bausch Health, $748 million in Horizon Therapeutics and $468 million in BrightSphere Investment Group, just to name a few. Also at stake is an extensive real estate portfolio, including multi-million-dollar properties in New York City, Southampton, N.Y. and Aspen, Colo. It’s reported that Paulson has already hired a prominent divorce attorney, and Jenny is looking to follow suit. And just like with Bill and Melinda Gates, the couple’s foundation, the Paulson Family Foundation, and its oversight, might potentially be thrown into the crosshairs if things turn contentious.

Nuances of a Gray Divorce

It’s no secret that gray divorces are on the rise. Some of the factors leading to the increase in such divorces include longer life expectancies, the diminishing stigma around infidelity and divorce itself, and simply growing apart after so many years together. There are many nuances that go along with gray divorces, for example, more assets amassed over longer periods of time and considerations such as Social Security benefits, investments and life insurance policies—factors that come into play less often with younger couples. It’s also established that prenups weren’t as commonplace among Boomers, leaving room for more disputes to arise.

Related: Ten of the Most Expensive Celebrity Divorces

“Most important is a prenup, but if there’s no prenup in place, the next best thing is a postnup,” says Daniel Nottes, at Cassin & Cassin LLP in New York City where he leads the matrimonial and family law practice. Similar to a prenup, the postnup outlines how assets will be divided but is entered into after a couple is wed. The agreement is typically more private, with very broad confidentiality provisions and is popular with high-net-worth couples, especially in New York, according to Nottes.

However, while prenups are commonplace across the country, the legality of postnups varies widely, as Michael A. Mosberg, partner at Aronson Mayefsky & Sloan, LLP in New York City, and Mark A. Bank, partner at Bank Rifkin in Birmingham, Mich., discuss in their recent article. “Some states allow postnups if they meet standards for validity similar to prenups. Other states allow postnups only if they meet such standards and they’re either reconciliation agreements, separation agreements or settlement agreements. Some states don’t allow postnups at all unless a divorce case is pending, and the agreement is the settlement agreement.”

Despite lack of a prenup, and most likely no postnup either, Nottes says he wouldn’t bet on the Paulson divorce going to trial or being litigated. As with other high-profile divorces in the headlines as of late, this one’s very much likely to be settled behind closed doors with lawyers and accountants.

“Paulson’s biggest challenge will be prolonged, public court proceedings that he should avoid. He will also have to spend a great deal of time with lawyers, accountants and other experts that will take up a lot of his personal time (and energy). The goal should be to resolve this as soon as possible and move on. Otherwise, they’ll end up going at it for much longer than needed—even without a prenup,” he adds.