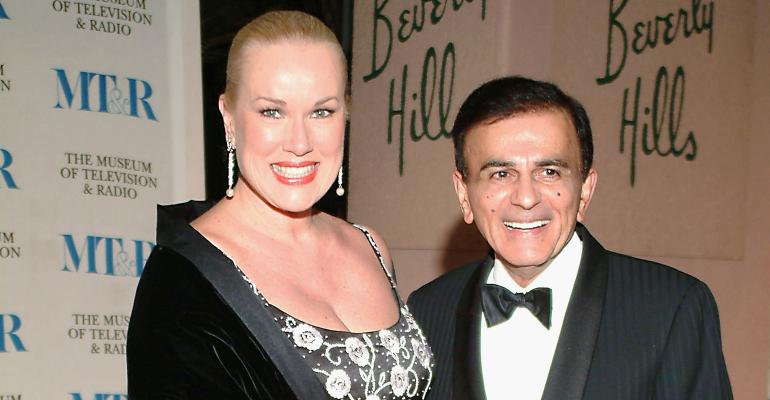 This bizarre family feud somehow finds a way to turn even uglier.

Recent allegations of murder and elder abuse amid the ongoing family feud between radio legend Casey Kasem’s second wife, Jean Kasem, and his three children from his first marriage, Kerri, Julie and Michael Kasem, sound like a plot from a Lifetime movie. Unfortunately, the drama is all too real. More than four years after his death, the battle rages on and is now the subject of an upcoming 48 Hours episode on CBS, set to air Nov. 24.

Casey, the voice and founder of American Top 40 radio show and the voice of Shaggy on the popular 1970s cartoon series Scooby Doo, died on Father’s Day in 2014 after a long battle with Parkinson’s and advanced Lewy body dementia. His death escalated an already heated family dispute over his medical care and visitation rights.

The family first made headlines in October 2013, when Kerri, along with Casey’s brother Mouner Kasem and his many longtime friends, staged a protest outside the Los Angeles estate where Casey and Jean lived, claiming Jean was keeping an ailing Casey prisoner in his home and preventing anyone from visiting him.

A week later, Julie, Casey’s middle child, and her husband, Dr. Jamil Aboulhosn, filed a conservatorship petition, charging that her father had signed a medical directive in 2007 placing the couple in charge of his care if he were incapacitated and that Jean had blocked them from finding out about his condition. Jean’s attorney responded by declaring that a document signed by Casey in 2011 had given his wife power of attorney, superseding the 2007 conservatorship.

A month later, Jean slapped back with her own written statement filed in court, stating that “[f]or reasons they know all too well, their presence at this stage would be toxic and extremely distressing for Casey, Jean and their daughter, Liberty, who have had enough of their cruelty.” The court upheld the validity of Jean’s conservatorship shortly after. At the time, Kerri raised suspicions of elder abuse at the hands of Jean, however, Adult Protective Services found no evidence of abuse or neglect.

One may think that estranged family members would put aside their differences to bury a loved one. Sadly, this isn’t the case here. According to an article in the New York Post, Casey’s body rests in an unmarked grave in Oslo, Norway. It’s not clear why this was chosen as his resting place, as Casey had never been to Oslo. His children believe Jean picked the location out of spite to make it difficult for them to visit.

The 48 Hours episode also brings to life the elder care and murder allegations the family is waging against each other. In 2015, Casey’s children filed a wrongful death lawsuit against Jean, accusing her of neglect and physical abuse of their father in his final months, including letting him remain confined to hospitals long after he was ready to be discharged, as well as secretly relocating him from a California rehab facility to a friend’s home in Washington state as his condition worsened.

Jean countersued in 2017, alleging that the children forced Casey to return to a hospital in Gig Harbor, Wash., where he eventually died. According to 48 Hours correspondent Peter Van Sant, Jean claims that they took advantage of the 2007 health care directive, which she alleges was signed under duress and undue influence, and told doctors to “unhook his nutrition, hydration and medicine and left him to die.” (The court granted Kerri temporary conservatorship after Jean removed him from the rehab facility and secretly drove him to Las Vegas, then to Arizona, back to Las Vegas and ultimately transported him via private jet to a friend’s home in Washington, all unbeknown to his children, who filed a missing person report.) Jean also accuses the children of wanting to cash in on their share of Casey’s life insurance policy. In response, Casey’s children maintain that the decision regarding removal of artificial delivery of food was made to not add additional suffering to his dying process, as per his wishes in the healthcare directive.

Regardless of who, if anyone, is ultimately found at fault of the neglect and abuse (or murder) that led to Casey’s death, this case highlights yet again that the elder abuse epidemic is only getting worse and that even the rich and famous aren’t immune from it.

Legal papers can only go so far to prevent animosity and emotionally charged situations, but they can certainly help protect the client to some extent. Advisors know to take into consideration potential family discord when drafting a healthcare directive. Particularly, advisors need to be extra careful when blended families are involved and a significant amount of wealth is at stake (Casey’s estate, for the record, is estimated to be worth $8 million to $10 million). To better prepare for situations in which a client’s family members might disagree about his treatment and care, a healthcare directive document should be as specific as possible when articulating a client’s preferences in the event of diminished capacity, and the client should also communicate his wishes to the family as part of a conversation. Being clear and explaining why one document should supersede another could have potentially prevented the issue of which document was the controlling one in Casey’s case.

For more detailed advice on preventing similar situations from happening to your clients, see Lawrence A. Frolik and Bernard A. Krook’s article on planning ahead for diminished capacity and Marvin E. Blum’s piece on covering issues beyond traditional estate planning.