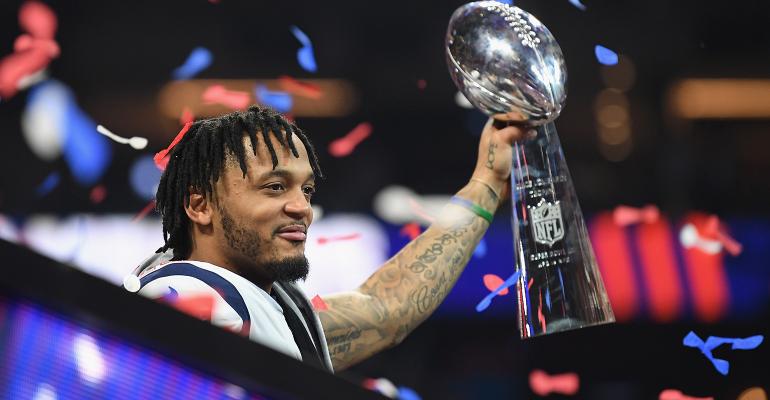 The Diversification of an NFL Star

Earlier this year, New England Patriots’ safety Patrick Chung made an investment outside his wheelhouse. The Super Bowl champion, who is entering his 11th season in the NFL, became an investor in New England’s lesser-known professional team, the Free Jacks, of Major League Rugby. Typically, Chung is on the more conservative side with his investments, but he is willing to take an occasional chance.

Then, he had a different mindset. The Jamaican-born athlete had just earned a fast $2 million signing bonus coming out of Oregon on top of his $3 million, four-year rookie contract (which has recently blossomed to his current $11.7 million, three-year contract with the Pats).

“I had my chain moment. You’re a young kid, 21 years old. I'm like, yeah, I'll get a chain,” Patrick recalled. “I told my mom, then looked at my chain, took it off and sold it back to the guy I bought it from. I lost a couple grand on it. And ever since then, I've just been more conservative.”

Related: How Do Some Star Athletes Build Wealth While Others Lose It All?

According to Spotrac, Chung has earned $34 million during his NFL career. He has matured both on and off the field while collecting a trio of Super Bowl rings.

“You realize you can’t be a child anymore. That’s what happened to me over the past 10 years,” Chung said. “You have to be smart with your investments. You have to be sure you can trust the people that you're going to do business with. And even then, sometimes people you trust will get you.”

Investment opportunities continuously came at Chung, but he remained guarded. He wasn’t looking for quick money. He wanted to build generational wealth for his family and for the future. He stressed protection and made some calculated risks.

The rugby deal came to him from a teammate, Nate Ebner—who the Patriots took a chance on in 2012 after playing only two years of football as a walk-on at Ohio State. Ebner was a rugby guy and even played rugby in the Olympics during his NFL career, in 2016. Ebner knew a professional career in rugby was almost impossible because there was no league in the states. So, he turned to football and watched rugby from afar, online, and when he could, on TV.

Chung’s locker sat directly next to Ebner’s with the Patriots, and they became close friends.

“Nate watched games on his phone next to me. We’re locker mates, so anytime he was sitting there watching a [rugby] game, I watched too, or he’d be showing me highlights," Chung said. "I asked questions and over the years, I just had an appreciation for the game.”

While it may be one of the risky investments in Chung’s portfolio, he appreciates the diversification.

“There is a great upside to it. It's different than buying a piece of land. It sits there, and hopefully you can sell,” said Chung. “This is just something I can really get involved in. I can help, I can help people, I can help the team, and I can help make something great.”

“The biggest thing for me is being hands on," he said. "I don't want to just give someone my money and not be able to know what's going on or give some opinions. Being a part of it is the best thing about this investment.”

He also has some advice for young NFL rookies entering the league this year: “You can start small,” Chung said. “If you're not going to use a lot of money for the next five, six years, put it somewhere very safe to get a little money. Look at an IRA and just save for your future.”

“Be smart about it and make sure you trust the people that you're going to do business with," he added. "Make sure you can actually have a conversation about something else besides what you sign the paper for, have a relationship with the person. Take your time and read through everything. Making sure you are protected, whatever the investment it is. Just play with what you have. Don't go too big.”