/sites/all/themes/penton_subtheme_wealthmanagement/images/logos/footer.png
Recent
Recent
Time for Growth: How and when you can reinvest in your business to take your firm to the next level
Oct 15, 2021
Everything You Always Wanted to Know About Social Media* (But Were Afraid to Ask)
Oct 15, 2021
Act Analytics Team to Join Sustainalytics
Oct 15, 2021
Eight Must Reads for the CRE Industry Today (Oct. 15, 2021)
Oct 14, 2021
Featured
The 10 Best and 10 Worst States in Which to Retire in 2021
Jul 15, 2021
Poll: 15 Classic Books on Investing and the Markets
Apr 03, 2020
25 U.S. Markets Adding the Most Multifamily Units This Year
Feb 03, 2021
Fifteen Must-Listen Business Podcasts for Advisors
Aug 14, 2020
Bloomberg
brought to you by 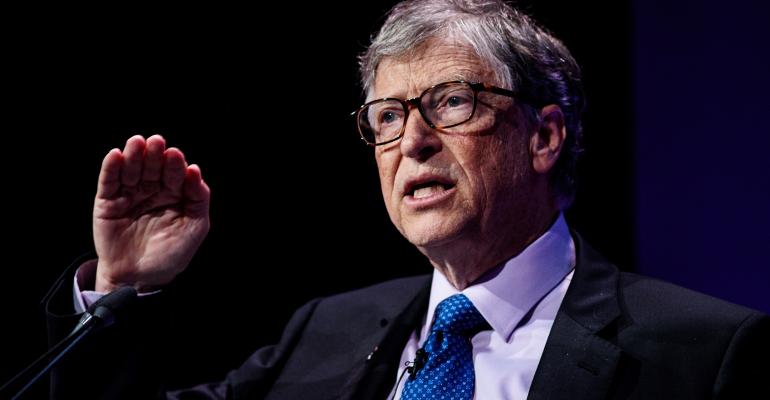 U.S. lawmakers should close loopholes, raise the estate tax and hike the capital-gains tax so that it equals the rate on labor income, the Microsoft founder wrote Monday in a year-end blog post.

(Bloomberg) -- Microsoft Corp. co-founder Bill Gates started the last decade worth more than $50 billion and with a pledge to donate large parts of his fortune to charity.

By the end of the decade, he’d given billions of dollars to fight poverty and improve health care and education. But his fortune also more than doubled during the period, a result of soaring stock markets and favorable tax policies.

And so at the end of the decade, the world’s second-richest person said he wants his fellow billionaires to pay much higher taxes.

U.S. lawmakers should close loopholes, raise the estate tax and hike the capital-gains tax so that it equals the rate on labor income, Gates wrote Monday in a year-end blog post. He also called for states and local governments to make their taxes “fairer” and reiterated his support for a state income tax in Washington, where he lives.

“I’ve been disproportionately rewarded for the work I’ve done -- while many others who work just as hard struggle to get by,” he wrote. “That’s why I’m for a tax system in which, if you have more money, you pay a higher percentage in taxes. And I think the rich should pay more than they currently do, and that includes Melinda and me.”

Gates, 64, has a net worth of $113.7 billion, according to the Bloomberg Billionaires Index, a ranking of the world’s 500 richest people. In 2010, Bill and Melinda announced the Giving Pledge with Warren Buffett and asked other billionaires to sign to give away chunks of their fortunes. As of May, 204 people from 23 countries agreed to participate.

At an event in November, Gates expressed reservations about the wealth tax proposed by presidential candidates Elizabeth Warren and Bernie Sanders. In his blog post, Gates said he won’t take a position on the various proposals being debated during the campaign.

“But I believe we can make our system fairer without sacrificing the incentive to innovate,” he said. “Americans in the top 1% can afford to pay a lot more before they stop going to work or creating jobs. In the 1970s, when Paul Allen and I were starting Microsoft, marginal tax rates were almost twice the top rate today. It didn’t hurt our incentive to build a great company.”

--With assistance from Sophie Alexander.