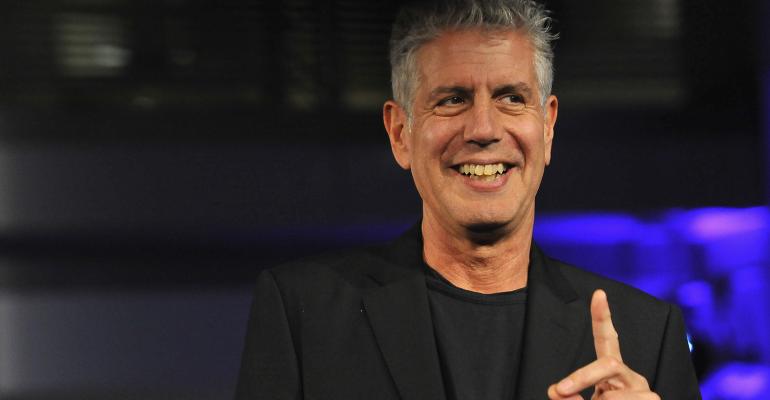 Anthony Bourdain isn't "looking to score big on the stock market," 60/40 is hot again and how much a burrito costs where you live.

Before making it as an author, celebrity chef and TV personality, Anthony Bourdain admits that he didn't have a savings account until he was 44 years old. Now that he’s wealthy, Bourdain admits that he prefers a conservative investment strategy that allows him to live comfortably and support his family. “My investment advisor understands that I’m not looking to score big on the stock market or bonds,” Bourdain writes in a blog post for the robo advisor Wealthsimple. He also said how much he despises debt (even his mortgage) and that he doesn’t mind paying high taxes instead of paying an advisor to “chisel the government out of an extra few thousand.” But he does describe the value of working with a financial advisor to handle financial decisions — many wealthy people just don’t want to think about money. “I don’t want to have those kinds of conversations. I’m putting myself to sleep just thinking about it.” Total assets in ETF Managed Portfolios — strategies that have more than 50 percent of assets in exchange traded funds — grew for the fourth straight quarter, up 2.2 percent from the third to the fourth quarter of 2016, according to a new report from Morningstar. Three of the five strategies with the largest quarter-over-quarter asset increases were 60/40 stock/bond strategic asset allocation portfolios, Morningstar says. The Vanguard CRSP 60 Percent Equity/40 Percent Fixed Income portfolio, for example, added $209 million in new assets during the quarter. “This punctuates a dramatic shift in investor preferences in this space that was spurred by the implosion of a handful of high-flying tactical strategies just a few years ago,” writes Ben Johnson, director of global ETF research. How much does a Chipotle burrito cost where you live? If you live (or work) in New York City's financial district, expect a chicken burrito to cost $8.68, the most expensive in the country. The price of a burrito in New York is in fact $1.56 more than the average, according to The Chipotle Index, created by Michael Mattheakis, a computer science student at the University of Michigan, Business Insider reports. The same burrito goes for just $6.90 in Conway, Ark., according to the Index. "The biggest factors tended to be rent, labor costs and taxes," Mattheakis said. "So dense cities tend to be a few dollars more for a burrito. But places that aren't as densely populated (e.g., Silicon Valley suburbs) but have a higher cost of living, have just as expensive prices." Sadly, the price of a burrito was not one of the factors The Economist used when developing its "Worldwide Cost of Living Report."