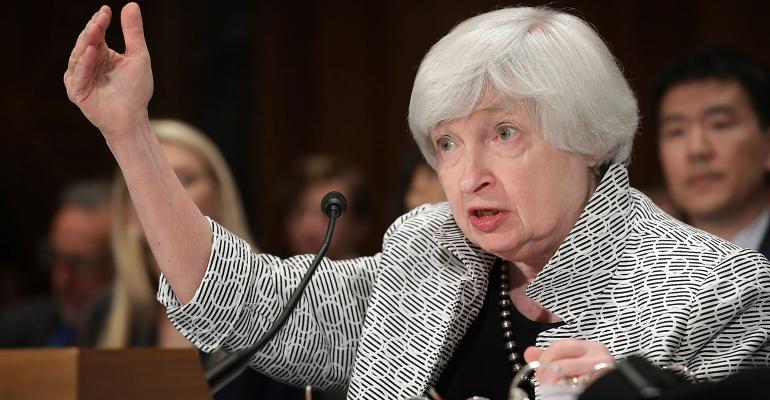 Informa’s David Ader parses the statement from this week’s Fed meeting and thinks a concern over low inflation will kick the next rate hike into 2018.

This week’s FOMC meeting delivered exactly what was expected—not much. In short, there were only modest changes to the words from the June meeting.

Two nuanced changes do stand out, though. First, the Fed changed its language in implementing the balance sheet reduction program from “this year" to “relatively soon." That change ups the ante for the start to be in September, though with the debt-ceiling debate looming, there is a remote chance the Fed will hold off until November.

The second change is important in terms of the timing of the next hike, or set of hikes. At the June meeting, the Fed wrote that “core inflation” was “running somewhat below 2 percent." At this week’s meeting, they wrote “overall inflation and core … have declined and are running below 2 percent." The removal of the qualifying word “somewhat” and addition of headline and core inflation are the Fed's way of acknowledging that low inflation has become a deeper, more intransigent, concern.

What this means to me is that the market's heretofore fairly even odds for a December hike (against the Fed's more hawkish indications) were well placed. The start of balance sheet reduction gives the Fed room to see how the market handles that change before they start fretting over the ramifications of a hike with inflation so low—and likely to stay that way for the next few months. The next hike looks like it will come in 2018, likely with a new Chairman at the helm—one who Trump surely would want to be business friendly (think dovish).

At 1.22 percent, funds are at their lowest level since late May. WIRP odds are 39.7 percent, down from 45.4 percent just before the July meeting and over 50 percent two weeks ago. That the curve steepened into and out of all that isn't really surprising, though that action remains, in my mind, more technical versus fundamental.

Consider an empirical way of looking at activity. The five-year is considered, historically, a directional instrument—it tends to lead the overall move in markets. The most recent auction saw a 69.8 percent indirect award, indicating strong bidding from the non-dealer community, i.e. the buyside. This was the strongest show, pretty much, in 2017 and suggests the recent backup attracted buyers very much within recent ranges.

The chart below shows the 2s/5s/10s Butterfly (in blue) overlaid with 10-year yields (in red). As the butterfly falls (i.e. 5s outperforming), outright 10-year yields also fall. So, such a solid 5-year auction could be a signal for a more bullish move in the offing.