/sites/all/themes/penton_subtheme_wealthmanagement/images/logos/footer.png
Recent
Recent
Seven Tips to Help Financial Advisor Firms Protect their Customer Lists
May 20, 2022
Nine Must Reads for the CRE Industry Today (May 20, 2022)
May 19, 2022
Dondero’s NexPoint Targets More Than $1 Billion for New Wager on Single-Family Rentals
May 19, 2022
SEC Judges’ Constitutional Cloud Darkens After Appeal Ruling
May 19, 2022
Featured
The 10 Best and 10 Worst States in Which to Retire in 2021
Jul 15, 2021
Poll: 15 Classic Books on Investing and the Markets
Apr 03, 2020
Fifteen Must-Listen Business Podcasts for Advisors
Aug 14, 2020
Celebrity Estates: Jay Leno and Planning for Classic Car Collections
Feb 22, 2022
Schwab IMPACT
brought to you by 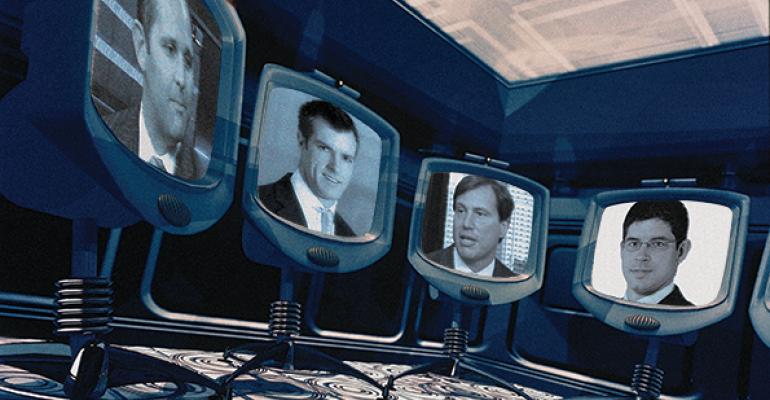 Superstar bond fund managers with many decades of experience may grab headlines regardless of performance, but there’s another generation of younger fund managers coming up in the ranks who are quietly turning in solid results without the hype.

These four managers have enough of a track record to show real-world results in up and down markets, but are young enough that they potentially could be managing funds for the next few decades. All have come of age professionally knowing nothing but a macro-level bull market in bonds, yet they are outperforming their peers in recent years with strategies that we think will serve them—and their investors—well for the coming turn in the market, whenever that may be.

In spring 2008, Brad Friedlander, 38, left his job managing Washington Mutual’s portfolio to co-found Angel Oak Capital. Since then he’s built up the fund to $3.3 billion in assets, looking for opportunities in the structured credit markets.

The firm is heavily weighted in non-agency residential mortgage-backed securities and commercial mortgage-backed securities, which make up a combined 85 percent of the fund. Year-to-date the fund is up 5.2 percent as of mid-October, almost a full percentage point above its peers in the multisector bond category from Morningstar, which has granted it a five-star rating.

Friedlander says they evaluate investments down to the loan level and focus on the higher-quality tiers of the mortgage market, with very little subprime in their holdings. Most of the strategies are low-duration and insensitive to interest rates because many of the positions they hold are floating-rate. Friedlander said he’s optimistic that housing is starting to turn around. Credit tightness is still an issue, but he thinks that’s beginning to shift.

“We’re at a point where the housing market is maturing and you are seeing real, fundamental demand,” he said.

Over the next two to three years, he expects more of the “millennial” generation to form households, which will support housing. “They’re just about to enter their higher-earning years … I’m not a subscriber to the thinking that everyone under the age of 30 is going to be living with Mom and Dad in perpetuity,” he said.

James McAlevey, 38, is portfolio manager of the 11-month-old fund at Henderson Global Investors, joining Henderson after a stint running a range of hedge funds at Julius Baer.

Although this fund took a bit of a hit during the high-yield rout in early October, it remains above its category peers with a year-to-date return of 0.74 percent and is ranked 58th out of 310 unconstrained funds.

“Like others, we were caught out in the move to lower yields so far this year,” McAlevey admitted.

The fund is made up of 21 percent each corporate high-yield and corporate investment-grade, plus nearly 20 percent in cash and derivatives. Within that group, McAlevey said there is a mix of U.S. and European high-yield products, weighing a little more heavily on the European side. They also have a “modest” allocation to U.S. investment grade.

As for borrowing costs, even though the Fed may have a large balance sheet because of quantitative easing, he said large public sector debt has “not stopped central banks from raising rates.”

McAlevey said the fund is positioned with the idea that the U.S. Federal Reserve will raise rates as soon as March or June of 2015 because U.S. economic growth is accelerating. He also doesn’t believe the U.S. economy is as interest-rate sensitive as some of his peers in bond management, so the overall economic effect should be muted.

The fund also can take currency risk, McAlevey said, and it is long the U.S. dollar, with a 5 percent weighting on
the greenback.

This four-year old fund is ranked No. 1 out of 310 funds in the unconstrained bond fund category, according to Morningstar, with a return of 10.16 percent year-to-date, and has beat the category average in one-year and three-year returns. It has $489 million under management.

Co-founder Gary Herbert, 44, seeded the fund with his own capital, and through September has had annualized returns of just over 20 percent, he said. “We want a low double-digit return target, but with a high margin of safety,” he said.

The top holdings of the fund, at 80 percent, are European residential mortgage-backed securities and high-yield. Of that 80 percent holding, 90 percent is in residential MBS, heavily focused on Spain. The investments are euro-denominated and they hedge out the euro risk.

Before choosing an investment, Herbert uses a proprietary model to run stress tests and model them for the 2008 financial crisis. “We effectively triple default rates, then basically increase loss severity by 50 percent,” he said.

The fund performed as designed, even with the recent concerns about European economic health, he said. “We’re banking on nothing good happening.” According to Morningstar, its one-year return is five percentage points above the Barclay’s US Aggregate Bond index, and two percentage points above its peers in Morningstar’s nontraditional bond category.

Herbert said that despite European Central Bank President Mario Draghi saying the ECB will buy asset-backed securities, “The market is dislocated. It’s one segment of the credit market that looks distinctly cheap, so we’re excited about it for the next several years.”

Benjamin J. Bailey, 37, has been co-manager of this so-called “socially responsible” fund since 2005. It has $403 million in assets under management and has beaten the Barclays US Aggregate Bond index after expenses over the past three, five and 10 years. As of Oct. 20, its year-to-date return is 5.4 percent and it has three stars from Morningstar.

Their top sector holding is corporate bonds, at 29 percent, but MIIIX is making a niche for itself in “green” bonds, Bailey said. He most recently bought a green bond from KfW, a German government-owned development bank, where the proceeds go to renewable-energy projects. Despite the turmoil in Europe, Bailey said he’s not concerned about default. “These bonds are triple-A rated and there’s a shared risk with the individual country,” he said.

As a socially responsible investment (SRI) fund, they use “positive” screens. That means investing in ways intended to have a positive impact, particularly on climates and communities, he said, rather than just avoiding sectors like weapon manufacturers.

The fund has a relatively low turnover rate of 24 percent. “Our goal is to be around the index and be outperforming after expenses, all within an SRI framework,” he said.