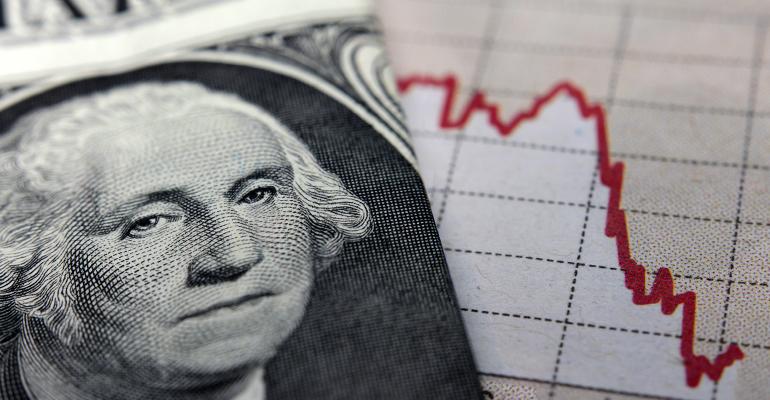 An inverted yield curve has preceded each of the last five recessions.

It’s time to talk more about the yield curve.

A good deal of attention is being paid to its flattening trajectory and the implications of, say, another 100 basis points of hiking by next summer, and possibly more beyond then: the idea being we’ll get an inverted yield curve and all that implies.

Related: The Market’s Defenses Are Down

I have little to add to the topic in terms of what it predicts. An inverted 2-year/10-year Treasurys curve has preceded each of the last five recessions since the 1970s, and the 1-year/10-year Treasurys curve has inverted 10 times in advance of the last nine recessions. (In the below chart illustrating all this, I included Federal Debt as a percentage of GDP to illustrate the problem we’ll face in the next recession in terms of fiscal stimulus, or lack thereof, to help bail us out.)  With 2s/10s at 37 bps, it’s not unreasonable to expect that another 100 bps of Fed hikes in the coming 12 months will take that spread to inversion. And, as the saying goes, the past is prologue.

There are other curves out there that are inverting already, which enhance the narrative. One is an oddball in that it looks at sentiment versus rates, which I think fits the story. This one looks at the spread between the University of Michigan’s 5-year Inflation Outlook versus Next year’s, an effective 5-year minus 1-year inflation call. It’s at -30 bps, which is simply saying that longer-run inflation expectations are running below the near-term ones. It plays well with the expectation for more aggressive Fed hikes sooner and a pause later. UMich’s survey is one of those “Market Measures of Inflation Expectations” the Fed talks about.

To be sure, it’s been negative for a while, but the negative spread has been widening, i.e., near-term expectations are rising relative to long-term expectations, which would seem to support the story and curve angle. Note, I’ve included inflation as one of the things the National Federation of Independent Businesses measures as the “most important problem” for the small businesses. In the realm of the 10 problems they ask about, inflation is one from the bottom or a “least important” problem. The bottom honor is held by “Financial and Interest Rates.”