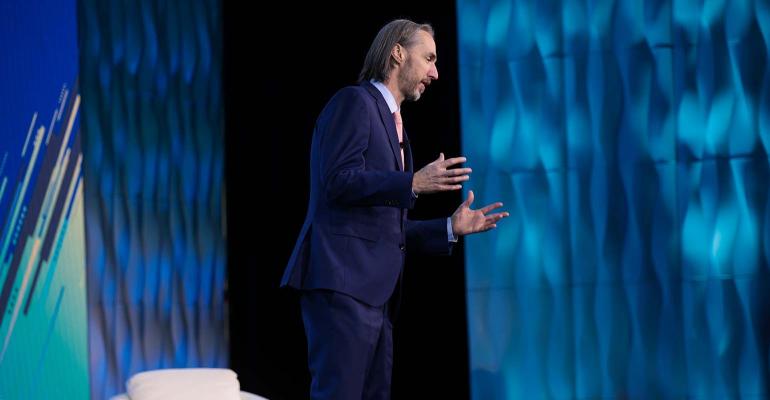 DoubleLine's Sherman: Back to Average

The underlying economic data doesn’t support the gloom-and-doom headlines, and for bond investors, there are corners of opportunities to find higher yield.

Despite the swath of negativity from the media, and a faltering stock market, the underlying data says "the current environment isn't that bad," said Jeffrey Sherman, deputy chief investment officer for bond fund giant DoubleLine Capital at the Inside ETFs conference.

Trying to put a positive spin on the current economic situation, Sherman spoke at Inside ETFs, part of Wealth Management EDGE at The Diplomat Beach Resort in Hollywood, Fla., on June 2. He said the coordinated effort to stimulate the global economy in the pandemic created a mismatch between easy money and a lack of goods and services—in short, people wanted to buy more things than the world was able to produce.

Since then, goods production has been slow to ramp up to levels needed to meet demand. Central bankers have vowed to fight the surging inflation by raising interest rates. The question everyone wants to know: Can the Federal Reserve walk a fine line and engineer a soft landing, or will it overtighten and cause a recession?

Sherman said he works at a bond shop, so his is a negative outlook by disposition. "We wake up negative; we go to bed negative." He firm runs the DoubleLine Total Return Bond Fund (DBLTX), one of the largest bond funds in the world. It's down 9% year to date, according to Morningstar.

Related: Roubini Sees a ‘Hard Landing’ for the Economy

Overall, global economic growth has been disappointing because of China and a eurozone faltering from Russia's energy crisis. But the U.S., he said, is just slightly negative.

"It's just a little bit worse than it has been on average over the past year. But if you read any media headlines, you wouldn't feel that way," he said. "Everything is so negative out there, but the data doesn't necessarily corroborate that. I'm here to say that right now, the current environment isn't that bad."

While estimates for global gross domestic product growth have come down significantly, Sherman said they are where they've been for the past 10 years, excluding the extraordinary years of 2020 and 2021.

The decline in the GDP growth rate is pricing in the slowdowns in both the U.S. and China, the world's two largest economies. The good news is that a global GDP growth rate of 3% looks pretty average for the last part of the cycle and is within the normal bands, he said.

"Notice that we're back into the range," he said. "What does that look like in the long term? We had an extraordinary decline and an extraordinary growth rate, but we're now going back to the trend. That's how the world works."

"Ultimately, I'm here to say that it kind of looks like we're back to average, said Sherman.

On inflation, he said that most bond traders think the country has hit peak inflation. For the 12 months ended in May, the annual inflation rate hit 8.6%, the highest rate in 40 years.

The bad news is that it's probably going to remain elevated relative to what the country has been used to over the past decade.

Federal Reserve Chairman Jerome Powell took some criticism by saying inflation was transitory, but he was not completely wrong, Sherman said. "It's a little different timeframe than (Powell) thought. It will cure itself over a period of time, and hopefully, it's not through a recession," he said.

The good news, he said, was that the bond market is on top of this situation. The current inflationary environment is structurally different from the situation in the late 1970s, because of globalization.

Bond investors have already suffered a lot of pain in their portfolios. While there's a little bit more to come, the bond market has already priced in an additional 200 basis points of rate hikes by year-end. Sherman said this environment is creating very interesting trading opportunities.

He told the crowd they need to manage the duration in their portfolios and can now build a fixed-income portfolio that yields around 5%.