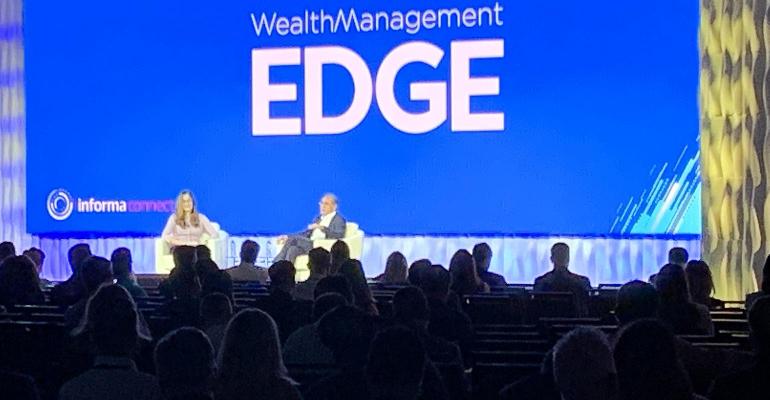 Roubini Sees a ‘Hard Landing’ for the Economy

There has never been a time when both inflation rose higher than 5% while the unemployment rate was below 5% that the country didn’t experience a hard landing when the Fed raised interest rates to try to reduce inflation, NYU’s professor of economics said at WealthManagement EDGE.

“Myself and a number of other economists say most likely we will have a hard landing,” famed economist Nouriel Roubini said during a sobering discussion to open the WealthManagement EDGE conference on Tuesday.

Related: Roubini: Stay Away From Crypto

Roubini explained pent-up demand was released when the economy opened up after the COVID-19 lockdown and combined with an aggregate of supply shocks to drive inflation higher.

The first global supply chain disruptions occurred during the lockdown, followed by a significant reduction in the labor supply. These two shocks were then amplified by two others—Russia’s war against Ukraine and China’s zero-tolerance policy against COVID-19.

The war caused supply shocks in oil, wheat and fertilizer, leading to sharp increases in energy and food prices. Meanwhile, China’s insistence on a zero-tolerance COVID policy has shut down many cities, creating more bottlenecks.

He told the crowd at The Diplomat Beach Resort in Hollywood, Fla. that last year’s debate among economists was: “Is inflation temporary?”

The Federal Reserve thought so, “but it’s fair to say that this point has been won by those of us who argued that it was more persistent.”

As inflation in advanced economies nears the double-digit level of the 1970s, the new debate centers on whether central banks normalize monetary policy to get inflation back to the Fed’s target rate of 2% without causing a recession and rise in unemployment.

If the Fed cares more about rising inflation, it will have to lift interest rates fast and soon. But the more the Fed raises rates above neutral, the more it increases the risk that the economy will dive into a hard landing, he said.

On the other hand, if the Fed cares more about economic growth and worries about a hard landing, it may raise rates too slowly, allowing inflation to get out of control.

Roubini said there has never been a time when both inflation rose higher than 5% while the unemployment rate was below 5% that the country didn’t experience a hard landing when the Fed raised interest rates to try to reduce inflation.

“That's why my point of view is that there’s a 60% probability by 2024 we will end up with a hard landing,” Roubini said.

But it depends on how much the central bank is willing to tighten monetary policy and endure short-term economic pain in order to push inflation down.

Roubini said there is a third worse possibility where the Fed “wimps out” by not tightening enough and ends up like the 1970s with stagflation—high inflation during a recession.