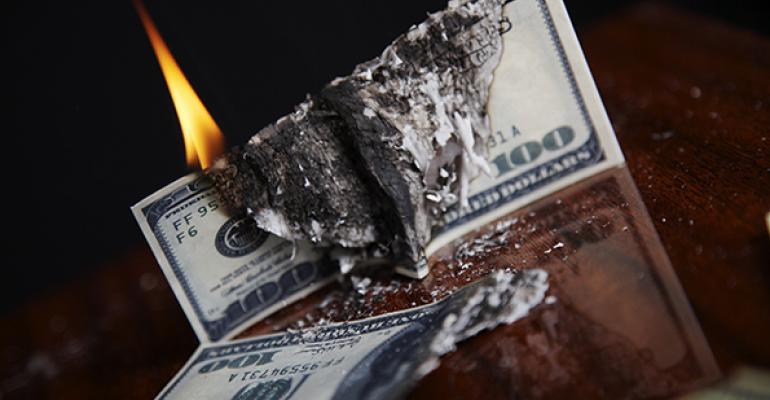 Is a recession around the corner?

I recently got a note from a friend who is also a manager at a rather huge public pension fund about last week’s article where I discussed a New York Times Op-Ed piece on “The Big, Dangerous Bubble in Corporate Debt.” My point about the piece was that concerns with the investment-grade bond market were filtering out to the public from our, err umm, “professional” realm. Well, a director at said manager’s fund saw the piece and expressed concern proving it’s getting out to the public. Oh, and some action was being taken accordingly.

Undoubtedly inspired by constant charts and musings on the matter, Barron’s Vito Racanelli wrote “Where Bonds’ Next Big Firestorm Could Begin.” Guess where?

Racanelli discusses the sharp rise in triple-B bonds over the last 10 years which has had the effect of weakening the overall credit of a given IG index. BBB bonds, for example, stand at $3 trillion versus just $700 billion in 2008. That’s a bulge in the market, outpacing issuance of other credits and taking the broader indexes down a notch in credit quality, as you might expect. Triple-B bonds are cuspy credits, too, such that with downgrading in the next recession these are the most vulnerable and would have to be sold if they fall from IG standing.

Consider that a Pimco “Viewpoint” from earlier this year relayed that triple-B was 48 percent of the IG market in 2017, nearly double the level of the 1990s. The same piece also made note that 18 percent of such companies were downgraded below IG, a function of the fall in commodity prices.  Such activity underscores the fallen angel risk inherent in an IG index. At the same time, net leverage has increased sharply.

The red flags all this raise is about what happens when the inevitable comes to fruition, which is to say the business cycle is not dead. 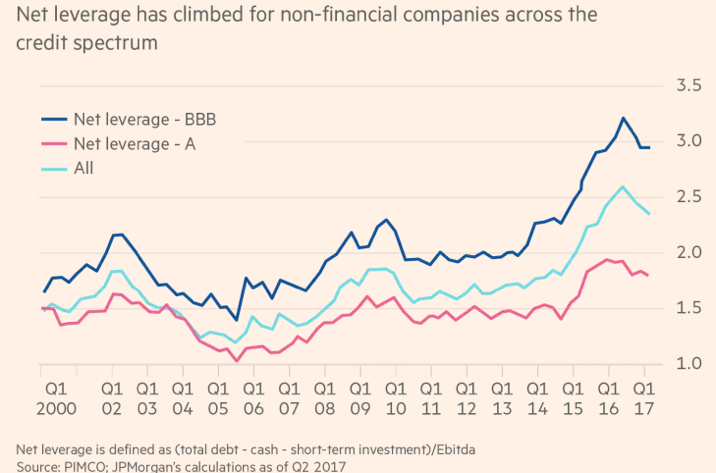 Still, the spread to Treasurys is arguably rich for all that. I’m forced to reason in a similar oddity with the S&P 500 I’ve been on (and on) in that the index is much less defensive today than it was before 2008. Then again, 40 percent of the S&P 500 was made up of defensive shares. Today it’s 16.7 percent. This is all to say that broad market indexes, stocks and bonds are riskier today as we edge toward the long end of this particular cycle than at any time in past 20 years. Do I need to add, “and will behave accordingly?”

In the grand scheme of things, it’s not about triple-B becoming such a force in IG; it’s the state of corporate bonds in general. Corporate debt as a percentage of Gross Domestic Product at 45.2 percent is pretty much at the historic highs and rather reminiscent of a similar development in, oh, 2000 and 2008. We’ve been here, right here, before. This doesn’t tell us a recession is around the corner (that’s why we have the yield curve!), but it does suggest why we might slip easily into the next big “firestorm,” to use Racanelli’s words.