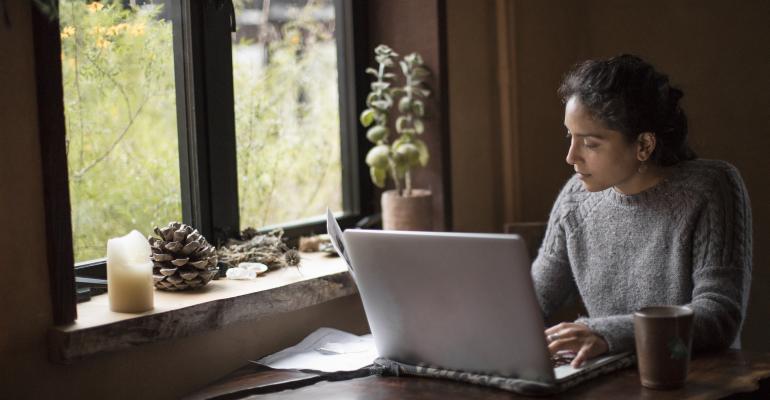 The Direxion Work From Home exchange-traded fund (ticker WFH), the largest with $37 million in assets, has plunged 44% over the past year and hasn’t seen an inflow since November 2021.

(Bloomberg)—Funds attempting to capture the work-from-home revolution are becoming an afterthought to investors as the office beckons.

The Direxion Work From Home exchange-traded fund (ticker WFH), the largest with $37 million in assets, has plunged 44% over the past year and hasn’t seen an inflow since November 2021. It’s a similar story for the $3.7 million iShares Virtual Work and Life Multisector ETF (IWFH) -- no new money has entered the fund since December 2021 amid a 55% drawdown this past year.

It’s a double whammy. The work-from-home theme is fading in relevancy as corporations push their employees to return to office buildings, a crusade led by the big Wall Street banks. On top of that, software and internet stocks (the biggest holdings for both WFH and IWFH) have been crushed by the Federal Reserve’s historically aggressive campaign to quell inflation. Added together, flows have been absent amid dismal performance, but Direxion’s David Mazza said there’s still a long-term opportunity.

“As the broader tech sector has underperformed, many of the names in WFH -- some of which are smaller companies that focus on cloud-computing, document management and product management, cybersecurity and collaboration tools have really suffered,” Mazza, head of product at Direxion, said on Bloomberg Television’s ETF IQ. “Even though performance has been challenged, this may be an opportunity for those looking at the long-term potential benefits of hybrid and remote work to look at this particular space, so it may be down, but it’s not out in any way, shape, or form.”

WFH launched in June 2020 at the height of the pandemic and went on to rally about 58% to its all-time high on Sept. 3, 2021. It’s been downhill since: WFH has plunged nearly 47% from that high-water mark.

The work-from-home ETFs are emblematic of the struggles faced by theme-focused funds overall. After a record $48 billion was plowed into thematic ETFs in 2021, inflows have slowed to just $183 million so far this year, Bloomberg Intelligence data show.