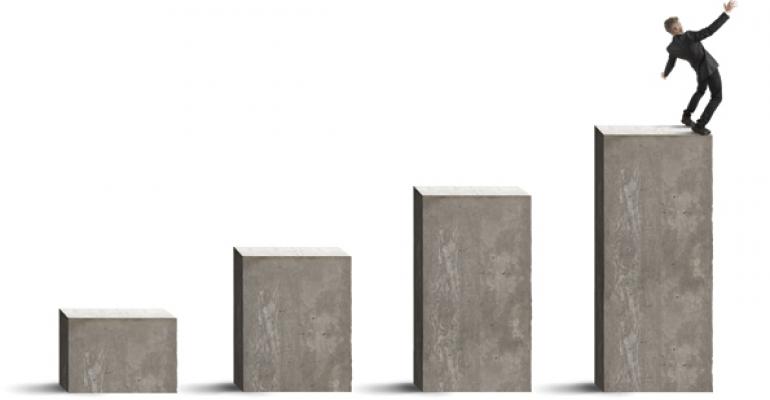 What To Do About Inflation Risk

A key precursor of inflation at the consumer level is an elevation in producer prices. Traditionally, the Fed uses rate increases to curb the effect of exuberant commodity prices. There&rsquo;s more concern about inflation in foreign markets than there is in the United States. The odds of inflation and a hike in interest rates are higher now than at any time in the past five years.

“Business opportunities are like buses,” says Richard Branson, entrepreneur and founder of Virgin Atlantic Airlines and the Virgin Galactic spaceflight company. “There’s always another one coming.”

But if Sir Richard peers closely at the destination sign on the next bus, though, he might notice the waypoints include a swing through “Inflation.”  A number of fundamental and technical indicators are now signaling a buildup of inflationary pressures in the domestic economy.
On the fundamental side are upward revisions in gross domestic product (GDP) as well as goose-ups in personal income and consumption expenditures. Then there’s better-than-expected numbers for durable goods orders, construction spending and auto sales. All told, these are signs of a healthier economy.  And of the effects of the Federal Reserve’s attempt to reflate the financial system.

Like conventional Treasury obligations, TIPS pay a fixed rate of interest but TIPS’ par value rise with inflation, as measured by the Consumer Price Index (CPI).

You can readily measure the relative worth of the TIP fund by comparing its value to the iShares 7-10 Year Treasury Bond ETF (NYSE Arca: IEF) which tracks conventional government paper of comparable maturities. The deflationary momentum in the price spread between the two ETFs has waned, leading to a bullish cross of the 50-day moving average over the 200-day mean (See Figure 1).

Figure 1 – Inflation-Protected Bonds Build A Base 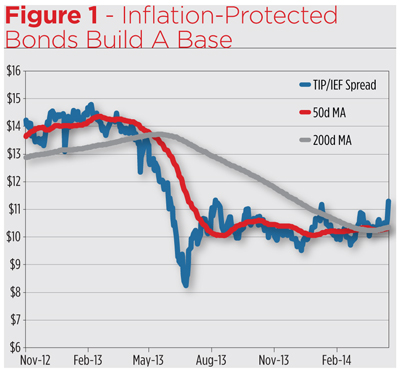 Other ETFs offer even better clues to the likelihood, degree and timing of an inflationary surge. A key precursor of inflation at the consumer level is an elevation in producer prices, which are driven by trends in the commodity sector. The GreenHaven Continuous Commodity Index ETF (NYSE Arca: GCC), an equally weighted portfolio of 17 non-financial futures, is a bellwether of commodity price momentum. GCC rose 9.6 percent in the first quarter of 2014.

Traditionally, the Fed uses rate increases to curb the effect of exuberant commodity prices, but current policy precludes such moves. We’ve seen, in fact, more slack in rates since the top of the year. The iShares 20+ Year Treasury Bond ETF (NYSE Arca: TLT) gained 6.5 percent in the first quarter as rates on the benchmark long bond dipped 50 basis points. Long-dated paper, being more sensitive than shorter maturities, is a telltale of investor sentiment as well as Fed action to throttle inflation.

Tracking the ratio of GCC and TLT prices yields a day-to-day measure of domestic inflation. Indexing the ratio to pre-crisis (i.e., 2008) levels paints a vivid picture of the recent interplay between raw goods prices and central bank policy (see Figure 2). 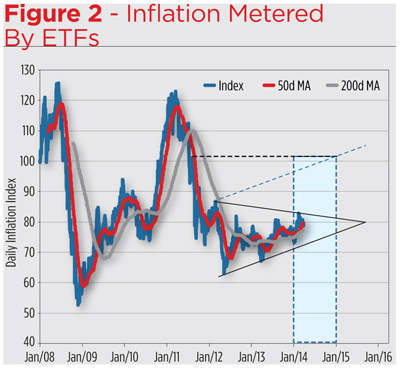 Most notable in Figure 2 is the recent wedge showing upward (inflationary) bias in the index. Technically minded traders see wedge formations as set-ups for breakouts in the direction of the prevailing trend. Most often, breakouts occur halfway to three-quarters of the way to the wedge apex. That would imply a window between February 2014 and January 2015.

Nothing in technical analysis, of course, is absolutely certain so it’s good to know the real odds of a break towards inflation. For that, a little probability theory can be employed. Given the current index volatility, the chances of a move above the recent high (82.70 on March 7) over the next year are better than 2-in-3, ten times more likely than a break below recent index low. The wedge itself provides a clue to the breakout target. Projecting a line parallel to the wedge bottom through the window makes the 100 level a likely objective – a level last seen in 2011.

All this implies a strong likelihood that annual CPI can be lifted from its quagmire to reach or surpass the Fed’s 2 percent target. So what can investors do to gird themselves?

Well, since we’ve already talked about TIPS, let’s start there. Presently, there are 17 exchange-traded funds in the TIPS business – 13 focused on the domestic market and four with global portfolios. All of the international ETFs are in the top ten based on year-to-date performance. That’s telling. Apparently, there’s more concern about inflation in foreign markets than there is in the ‘States. Not surprising, really, given the Fed’s accommodative stance. Still, there is one domestic TIPS product that has handily outdone the global portfolios. 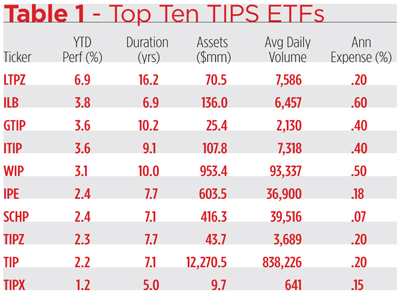 Just like conventional bonds, longer-dated TIPS are more volatile than shorter maturities. That’s why the category’s top performer this year has been the PIMCO 15+ Year U.S. TIPS ETF (NYSE Arca: LTPZ). With an average maturity of 22 years, two-thirds of the fund’s holdings are in the 20-to-30 year range. While the fund’s duration is also a chart-topper, indicating LTPZ’s potential effectiveness as an inflation hedge, it’s also a beacon of the product’s inherent interest rate risk. LPTZ investors have to be sanguine about rates at the long end of the yield.

Further down the table are four domestic TIPS funds fairly similar in duration (roughly seven years). Most notable among these is the category’s behemoth – the iShares TIP product – which owns a 61 percent share of the TIPS ETF market. Economy-minded investors will be attracted to the Schwab U.S. TIPS ETF (NYSE Arca: SCHP) with an annual expense ratio a third of the category’s average.

Rounding out the top ten is the SPDR Barclays 1-10 Year TIPS (NYSE Arca: TIPX), an ETF focused on the short end of the maturity spectrum.  The fund’s short duration, less than a third of category leader LTPZ, accounts for a rather paltry gain on the year but will likely insulate investors against a precipitous rate uptick.

Since we’re dealing with rates, let’s imagine the impact of tapering on the Treasury curve.  Real and anticipated decreases in Fed demand for long-dated paper put upward pressure on rates as investors seek refuge from the inherent volatility on the right side of the curve. Additional impetus comes from growing apprehensions of embryonic inflation. All this is a recipe for steepening in the curve – an already well-established trend.  Over the past 12 months, the spread between 2- and 30-year Treasury yields has widened by more than 30 basis points (bp) while there’s been an even more dramatic 70 bp steepening in the 2-10 segment.

There are a few ways investors can capitalize on further flight from long-dated paper. The simplest approach is to join the trend by swapping longer for shorter maturities.  Alternatively, the trade can be proxied with exchange-traded products.

There are six exchange-traded products that simulate sales of 10-year government paper. 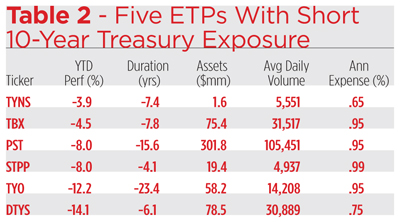 Despite the price hits taken by these ETPs in the wake of safe-haven Treasury purchases, asset flow has actually been positive, most notably into the ProShares UltraShort 7-10 Year Treasury (NYSE Arca: PST) which gained $17 million in the first quarter. The fund, a favorite bet against intermediate-term government debt, offers two-fold leverage through its mix of swaps and futures. PST’s duration is a likely engine for outsized returns when, and if, rates rise.

Even greater leverage can obtained through Direxion Daily 7-10 Year Treasury Bear 3X Shares (NYSE Arca: TYO), a fund comprised of swaps on the iShares IEF fund.  With its -300 percent exposure, TYO acts like a derivative making it a useful short-term hedge. It’s not as liquid as PST, though. As with any fund of this type – PST included – TYO’s stated leverage can’t be expected to persist for more than one day. Rebalancing may be necessary if any “daily” fund is used for hedging.

Despite its name, the iPath U.S. Treasury 10-Year Bear ETN (NYSE Arca: DTYS) doesn’t limit itself to 10-year notes. Rather, the exchange-traded note’s underlying index tracks 10-year Treasury futures which call for delivery of notes with remaining maturities between 6.5 and 10 years. That, and a unique pricing methodology, account for the note’s low effective duration and disparate return. Rather than employing a daily leverage factor (-100 percent,-200 percent or -300 percent), DTYS provides constant dollar exposure to its underlying asset. Every basis point change in yield results in a one point move in the index which, in turn, results in a 10-cent change in the ETN’s value.

The iPath US Treasury Steepener ETN (NYSE Arca: STPP) permits investors to play one end of the yield curve against the other. The note tracks an index that simulates a spread trade in Treasury futures: long 2-year notes and short 10-year notes.  The index’s spread is levered to compensate for duration risk. The 2-year exposure constitutes 75 percent of the index weight; 10-year paper accounts for 25 percent, resulting in the least negative duration in the category.  STPP’s benchmark maintains constant yield curve exposure by notionally rolling its investments forward, effectively swapping soon-to-expire contracts for those with later delivery dates. The net expense of rolling two contracts annualizes to 24bp and is built into the index methodology. That cost, on top of the 75 bp annual investor fee, makes the ETN a relatively expensive hold.

Given the recent track records of the products we’ve examined, it may seem a little premature to be concerned about inflation and yield curve steepening. But the odds of inflation and a hike in interest rates are higher now than at any time in the past five years. Once inflation is front and center on investors’ radar screens, hedging will likely be more costly. As American author H. Jackson Brown once said, “Nothing is more expensive than a missed opportunity.”