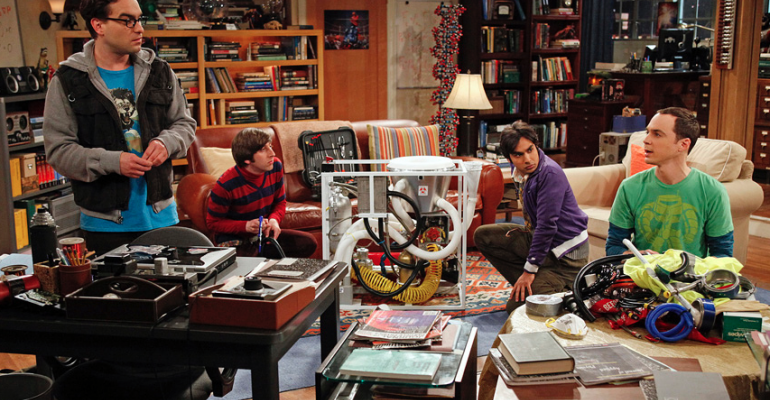 It does not take a Ph.D. to see that we may be witnessing a big bang in inflation, but the early stages of accelerating inflation have been historically good for the economy and stock market.

The Big Bang Theory, the most watched television comedy, is about a group of physicists and their aspiring actress friend from across the hall. The show often refers to theoretical physicist Sheldon Cooper’s quest for a Nobel Prize in physics as he frequently derides the work of his experimental physicist roommate, Leonard Hofstadter, and puzzles his neighbor, Penny. Life imitates art: recent data suggests MIT theoretical physicist Alan Guth (think Sheldon) is likely to be awarded the Nobel Prize for his inflation theory of the origin of the universe now that an experiment by astrophysicist John Kovac (think Leonard) found evidence of the origin of the big bang in a ripple pattern of rapid acceleration outward in polarized cosmic radiation (think Penny giving a confused look).

It does not take a Ph.D. to see that we may be witnessing a big bang in inflation. The popular theory that accelerating price inflation in the U.S. would eventually be detected has gone many years with little evidence. However, signs that inflation has probably bottomed are now showing up everywhere. 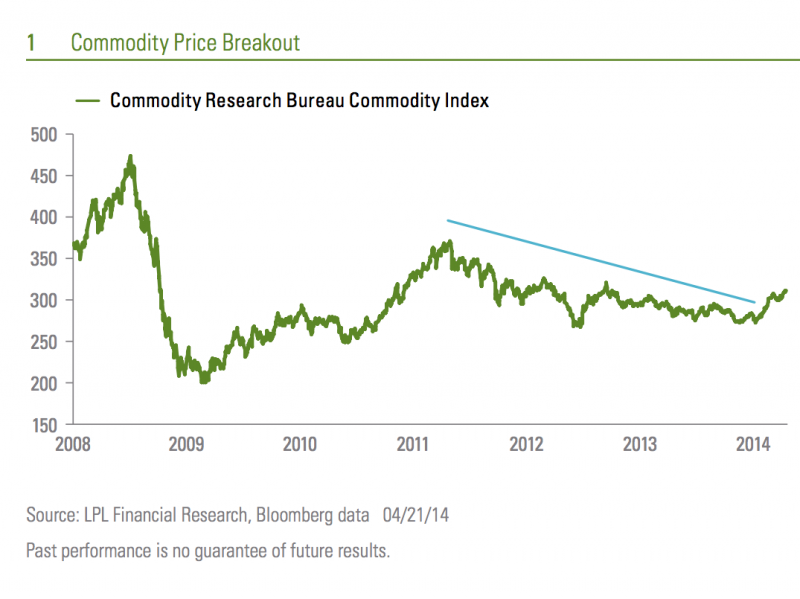 Now that evidence has emerged that inflation has bottomed, the question is how much prices inflate. All of that quantitative easing (QE), or Federal Reserve (Fed) bond buying from the banks, is potential “energy” to fuel inflation. While thus far it has largely remained in the form of reserves on bank balance sheets, bank lending is finally beginning to reaccelerate—a necessary driver for growth in the money supply.

This is an intended outcome for the Fed. The Fed is focused on lifting inflation and sees it as important for achieving sustainable growth. Last week Fed Chair Yellen said: "A persistent bout of very low inflation carries other risks as well. With the federal funds rate currently near its lower limit, lower inflation translates into a higher real value for the federal funds rate, limiting the capacity of monetary policy to support the economy. Further, with longer-term inflation expectations anchored near two percent in recent years, persistent inflation well below this expected value increases the real burden of debt for households and firms, which may put a drag on economic activity." Or, as Sheldon might put it: Bazinga!

The early stages of accelerating inflation have historically helped fuel economic growth as consumers begin to expect price increases and may stop delaying purchases. The early stages of inflation picking up have also been good for stocks. Examining periods since 1950, the valuation of the stock market measured by the S&P 500 trailing price-to-earnings ratio (PE) tends to be higher when the Consumer Price Index rises above the current 1.5% [Figure 2]. In fact, S&P 500 PEs tend to be a whole point higher than the current 16.8 when inflation is between 1.5 and 2.5%, a range some signs are pointing for the coming year. Only as inflation rises above 3.5% has it corresponded with lower PEs. 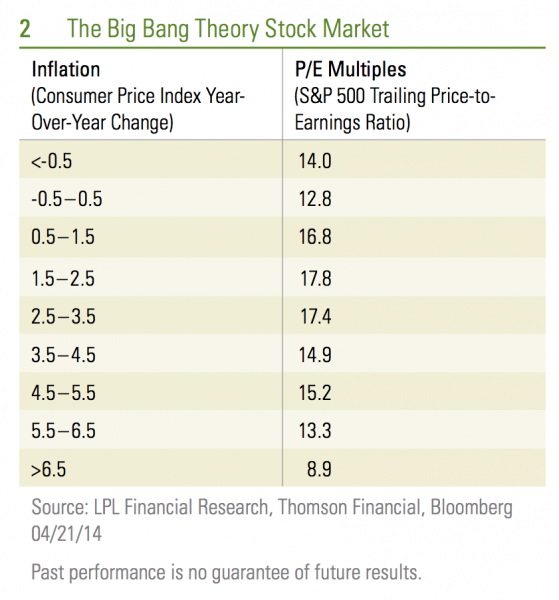 Could inflation quickly rise above 3.5% and act as a negative for the stock market? We see that as unlikely in 2014.  CPI has not been above 3.5% in 20 years, but when it was, it was supported by much faster growth in wages (since consumers must have the money to pay the higher prices). Given the still sluggish, though improving, labor market, it is unlikely that inflation would rise that quickly over the coming year.It does not take a Ph.D. to see that we may be witnessing a big bang in inflation, but the early stages of accelerating inflation have been historically good for the economy and stock market.

The big bang theory has started to emerge in the stock market with the inflation-sensitive materials and energy sectors appearing to lead the market higher. Since the 2014 low in the S&P 500 on February 5, these sectors have been outperformers. If the inflation big bang theory proves correct, these cyclical sectors may continue to help to lead the stock market higher in the months ahead.

The P/E ratio (price-to-earnings ratio) is a measure of the price paid for a share relative to the annual net income or profit earned by the firm per share. It is a financial ratio used for valuation: a higher P/E ratio means that investors are paying more for each unit of net income, so the stock is more expensive compared to one with lower P/E ratio.

The company names mentioned herein was for educational purposes only and was not a recommendation to buy or sell that company nor an endorsement for their product or service.

The Producer Price Index (PPI) program measures the average change over time in the selling prices received by domestic producers for their output. The prices included in the PPI are from the first commercial transaction for many products and some services.

The Commodity Research Bureau (CRB) Index is an index that measures the overall direction of commodity sectors. The CRB was designed to isolate and reveal the directional movement of prices in overall commodity trades.