/sites/all/themes/penton_subtheme_wealthmanagement/images/logos/footer.png
Recent
Recent
15 Must Reads for the CRE Industry Today (Oct. 6, 2022)
Oct 05, 2022
Data, Data Everywhere and Not a Takeaway in Sight: Defining and Resolving the Industry’s Data Challenge
Oct 05, 2022
Working From Home Is Not an Urban Escape Hatch
Oct 05, 2022
What If the Rental Market Is the First to Break?
Oct 05, 2022
Featured
The 10 Best and 10 Worst States in Which to Retire in 2021
Jul 15, 2021
Poll: 15 Classic Books on Investing and the Markets
Apr 03, 2020
Fifteen Must-Listen Business Podcasts for Advisors
Aug 14, 2020
Celebrity Estates: Jay Leno and Planning for Classic Car Collections
Feb 22, 2022
The Market's Measure
brought to you by 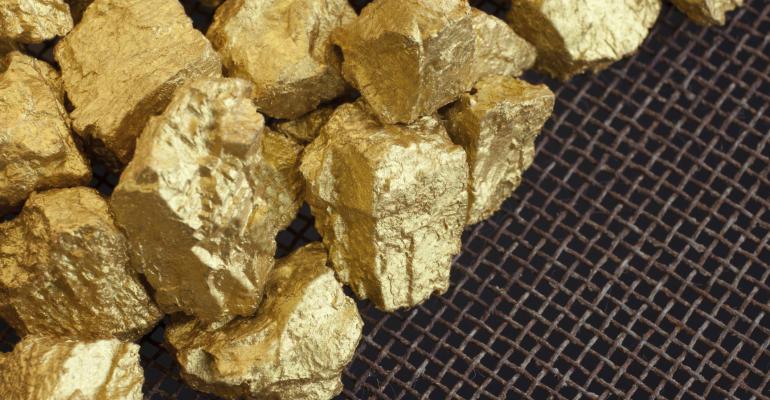 A Vein of Gold Profits?

Some gold miners have outperformed bullion, the market and their peers this year. Our subscribers got the ‘heads up’ in February.

You’d be forgiven if you thought new life’s been blown into gold mining stocks. While bullion’s been fibrillating between $1,200 and $1,400 – mostly near the middle of the range – the miners have soared. Well, some miners anyway.

A couple of exchange-traded funds (ETFs) represent the miners spectrum. The Market Vectors Gold Miners ETF (GDX) tracks an index of more than three dozen large-cap gold producers. Exploration and development companies – five dozen of ‘em – comprise the Market Vectors Junior Gold Miners ETF (GDXJ). Think of GDX as the “blue chips” of the mining world while GDXJ represents venture capital. You’d expect blue chip issues to be less risky than VC investments, right? And so it goes with miners. Investors aggressively bullish on gold are more likely to risk their money on junior miners rather than more stolid producers.

Back on Feb. 3, we published “Digging For Gold Mining Stocks," an article reviewing the prospects of gold mining stocks. Since then, bullion’s gained a paltry 3.2 percent while GDX rose 14.8 percent. GDXJ, meantime, appreciated 20.1 percent (versus a 13.1 percent uptick in the S&P 500). You can see the relative strength of GDX and GDXJ against bullion in Figure 1.

After losing ground to bullion for months (um, years) there finally seems to be some serious base building going on for the miners. Seems. Figure 2 depicts the risk appetite of gold stock investors. It’s really nothing more than an indexed ratio of GDXJ’s price against GDX’s. While the index has broken a three-year downtrend line, it has some further upside work to do to break above some intermediate-term resistance levels.

That’s not to say that all of the miners are dithering. Topping the list of gold miners “best picks” in the February article were Gold Resource Corp. (GORO) and Randgold Resources Ltd (GOLD). GORO’s gained 30 percent while GOLD’s picked up 22.4 percent. Clearly, these issues have already done a lot of work.