A sweet spot for skittish investors.

It’s getting harder and harder to find new buying opportunities in the large-cap ETF space that doesn’t involve inverse or leveraged index exposure. We bemoaned that in an earlier column.

That’s not to say there aren’t any opportunities. It’s just that the low-hanging fruit has largely been plucked—at least on the bullish side.

So we were happy to see a modest buy signal flashing for the Invesco Russell 1000 Equal Weight ETF (NYSE Arca: EQAL). As the handle implies, EQAL is an equal-weighted take on the Russell 1000 Index. Putting all of its portfolio components on equal footing, as you might expect, tilts EQAL toward smaller stocks compared to the capitalization-weighted iShares Russell 1000 (NYSE Arca: IWB).

At the top of the IWB portfolio are market giants such as Microsoft Corp., Apple Inc. and Amazon.com Inc., which, taken together, account for a tenth of the fund’s capitalization. In the EQAL portfolio, those three stocks, in aggregate, account for less than a quarter of 1% of the fund’s heft.

It’s not that every one of EQAL’s 987 component stocks contribute identical capitalization, mind you. The index methodology, rather, calls for weighting the benchmark’s nine market sectors (information technology, consumer staples, etc.) equally, then divvying up that weight evenly to each of the sectors’ constituents. Under this scheme, First Solar Inc. (Nasdaq: FSLR), a $6.9 billion company, has three times the impact as $1.1 trillion MSFT.

That skew may be why, in fact, the Invesco fund’s now rousing after a long stint of relative underperformance.

Smaller stocks, in general, are more sensitive to shifts in investor sentiment. When punters feel buoyant about the economy, they take on more risk. Small- and mid-cap stocks tend to overperform then.

Lately, that’s just what’s happened. One-week, two-week and four-week trends show EQAL outshining IWB as investors’ risk appetite has spiked. EQAL may just be a sweet spot for investors who’d like (or must) stay in large-caps but want a little of the smaller-cap “oomph.”

So what’s the deal? A breakout from double-bottom on the EQAL chart is a set-up for a $4 (12 percent) sprint to higher ground if the fund can break through resistance at the $33 level. 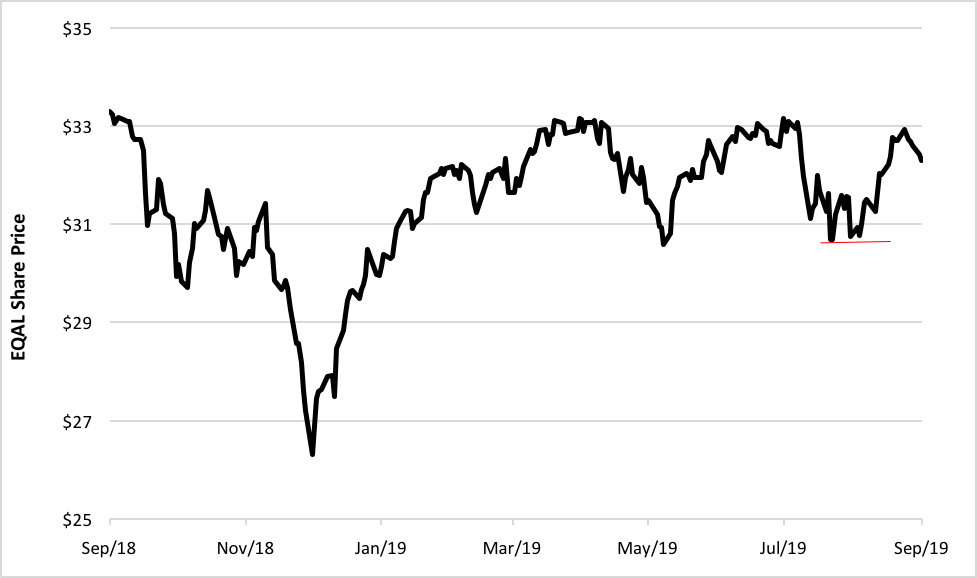 Yeah, I know. It’s not a ten-bagger. It’s a modestly bullish objective. But what are you gonna do? Pickin's are slim.