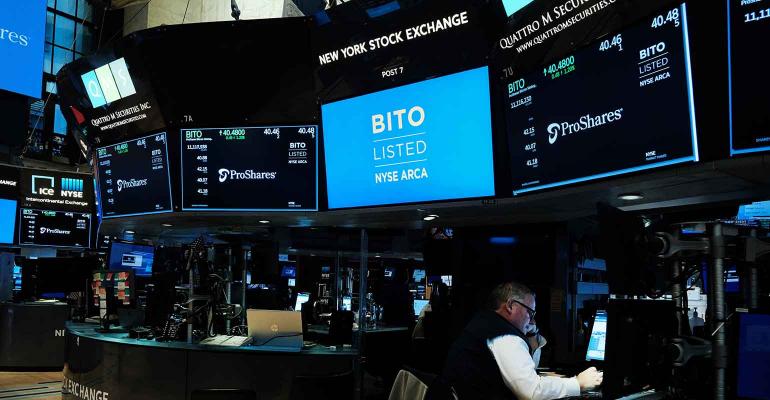 Simeon Hyman, ProShares’ global investment strategist, spoke with WealthManagement.com about the asset manager's new Bitcoin futures ETF, why an investor would want to buy the ETF versus directly owning Bitcoin, and overcoming the challenge of educating clients about the aspects of futures.

ProShares made history this week with the launch of the first bitcoin futures ETF, which listed on the New York Stock Exchange on Tuesday under ticker BITO. The ProShares Bitcoin Strategy ETF can be bought and sold like a stock, without the need for an account at a cryptocurrency exchange.

Related: Grayscale Files to Turn the World’s Biggest Bitcoin Fund Into an ETF

The cryptocurrency and investing communities have waited years to have a Bitcoin ETF approved by the Securities and Exchange Commission, and, so far, no ETF that directly invests in Bitcoin has been approved. The Winklevoss twins were the first to file for a Bitcoin ETF in 2014.

SEC Chair Gary Gensler gave a speech on crypto ETFs in August, indicating that the commission would prefer funds that invest in Bitcoin futures.

Simeon Hyman, ProShares’ global investment strategist, spoke with WealthManagement.com about the new fund, why an investor would want to buy the ETF versus directly owning Bitcoin, and overcoming the challenge of educating clients about the aspects of futures.

The following has been edited for length and clarity.

WealthManagement.com: How does it feel to be the first out of the gate with the Bitcoin futures ETF? 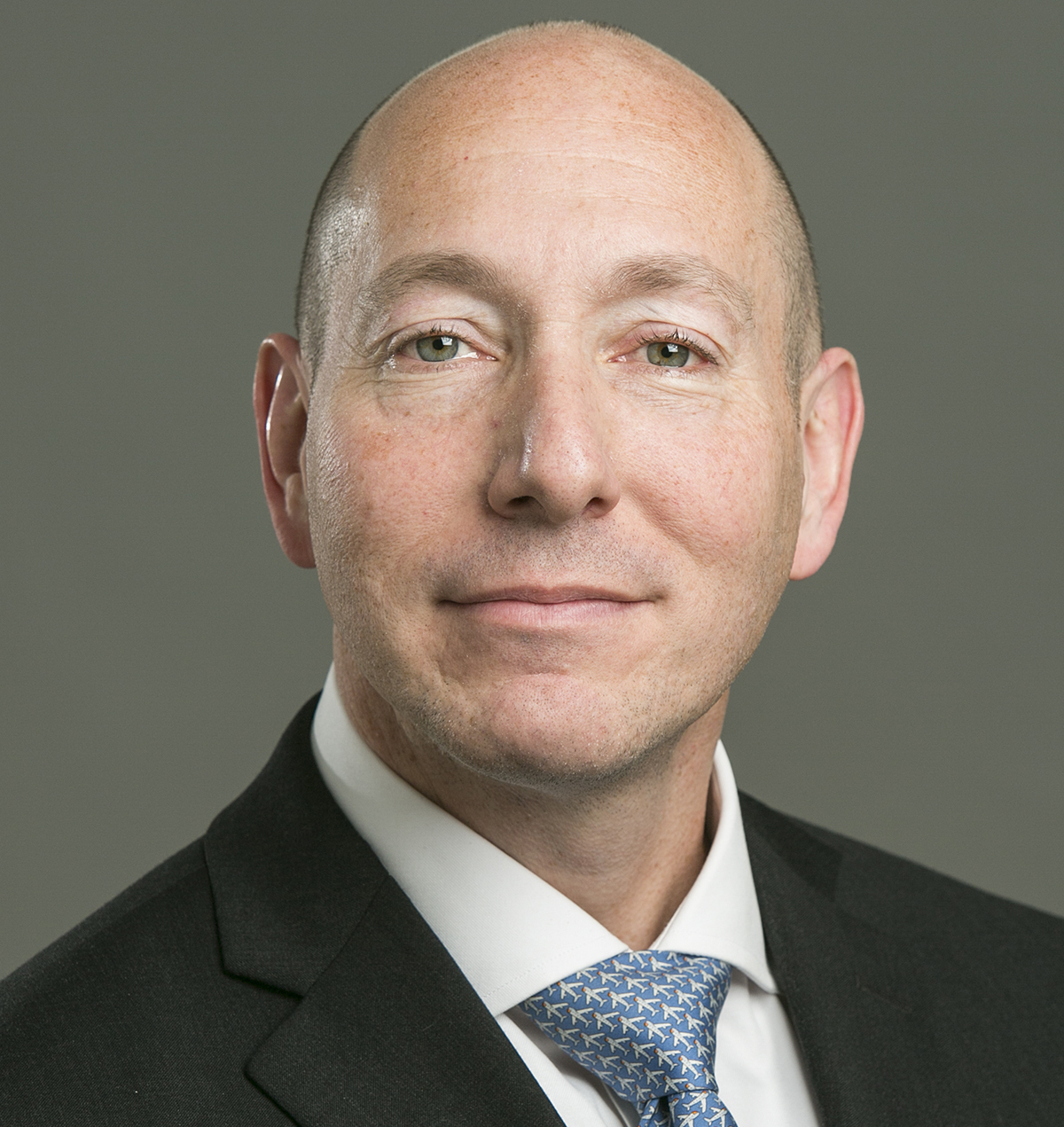 Simeon Hyman: We certainly do think that this combination of the regulated futures market and the simple, convenient and regulated ETFs instrument is a powerful combination that's going to offer the opportunity to get exposure to Bitcoin for a lot of investors who were waiting for something like this.

WM: Why should investors buy the ETF versus just buying Bitcoin directly?

SH: We want to turn the narrative on its head a little bit. So aside from the convenience aspects, because not everybody's up for understanding how the exchanges work and whether they need a wallet, whether they need a warm key or a cold key, so the convenience aspect is important. The regulated aspect is really important too. Folks, I think, underestimate the complexity of the Bitcoin spot market these days. It's not quite like gold. It might be X number of years from now, but there are lots of different exchanges that hold different prices. It's not so simple in spot land. And also a fair amount of experts believe that the futures market is arguably a better place for what the academicians called “price discovery.”

There's actually 40% more volume on the CME futures than there is in Coinbase. So there are more advantages to futures than I think people appreciate. We launched ticker BTCFX, the sister mutual fund to BITO, on July 28, following roughly the same futures-based strategy. Since 7/28 through Friday, the Bitcoin reference rate—that’s the amalgamation of several of the largest exchanges for a consensus price number—is up 51%. The futures based mutual fund is up 52%. The Grayscale Bitcoin Trust with the spot thing is up 37%.

So we just want to turn that little narrative on its head because a lot of people feel like, “I'm glad they got an ETF out, but I wish they came out with a physical thing." You know what, the futures thing is a pretty darn robust choice here. And so that we think is an important message. And of course, then putting it in the ETF really puts a nice bow around it, such that it's real easy, but also it's, let's call it elegant. So we want to get that message across too, because I think people underestimate the shortcomings of spot and overestimate the shortcomings of the futures.

WM: Obviously the industry has been going back and forth with the regulators for years to get a Bitcoin ETF out there. Why do you think the regulators were accepting of this structure?

SH: The public comments from the SEC are very straightforward: “The futures market is a regulated place. Scary things don't happen there. And therefore, we, the SEC, like it as a place for people who want exposure to Bitcoin.” And we certainly see our views consistent with those public views.

This is not to say, of course, that Bitcoin doesn't have volatility. The volatility, I would argue, to some extent is a feature, not a bug, because it's a real diversifier. And here you have a real diversifying asset that could be used. The use cases that folks are talking about are virtual gold, an alternative to currency or an inflation hedge.

WM: A lot of folks would argue that Bitcoin has peaked, and that if you haven’t invested yet, you’ve missed the upside. How would you respond to that?

SH: You're unlikely to hear us at ProShares put forth price targets or opine on the future of Bitcoin prices.

But we do know that the introduction of our ETF will allow some people who have very short time horizons to trade around it and with some velocity. And we think that's good for the robustness of the market, but if you're thinking about it as a longer-term investor, it's never been a great day to try to time things precisely. We're happy that this ETF, we think, is a marker in the maturation and the evolving growth of Bitcoin and cryptocurrency in general.

The key here is to remember that its role in your investment portfolio is not exactly the same thing as its underlying use cases, per se. You don't have to be worried about the use of Bitcoin in terms of its role in de-fi, and mining, and anonymity, to understand that it can have an important diversifying role in your portfolio that you could hold for a while.

WM: A lot of advisors don’t want to educate their clients on the aspects of futures. How would you respond to that?

SH: I've had my tour of duties and lots of opportunities to interface with private clients over the years. And there are a lot of complicated strategies in the world that have value to add that I think advisors use all the time. No. 2, I don't think it's really harder to explain the futures market in Bitcoin than it is to explain any other way that you would get exposure. In fact, I would suggest it's probably simpler to understand Bitcoin exposure through futures than through exchanges and wallets, because futures have been around for a long, long time; the CME, and the CFTC perform a regulatory and a clearing house function; and these securities are simply bought and managed by the ETFs. And it's pretty darn straightforward.

It is the challenge of any financial advisor and anybody giving advice to translate finance into English. This ain't one of the more complicated ones.

WM: Do you plan on submitting any other applications for crypto ETFs, perhaps for a direct Bitcoin fund or Ethereum fund?

SH: We certainly don't think that the futures approach to Bitcoin is anything but a first-class robust solution. That being said, we put in our first Bitcoin filing in 2017. We are watching the evolution of the spot markets and other coins, and we are watching the evolution and maturation of the regulatory environments, and if we see opportunities to bring further innovative solutions to end users, we are going to do that, but I don't have any comments on any specific filings, but we don't stand still for sure.