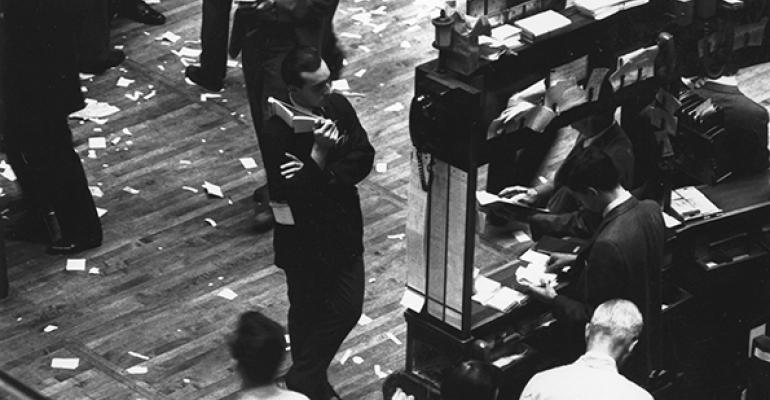 Peak Finance Looks as If It Has Come and Gone

(Bloomberg View) -- It’s time to ask a scary question: How much of the financial industry will soon be obsolete?

There are many examples of technologies that have been replaced by something newer and better -- film replaced by digital cameras, typewriters replaced by word processors. Finance isn’t quite like that -- businesses will always need to finance their investments and their day-to-day expenses, property buyers will always need mortgages and everyone will always need places to save their money. As long as capitalism lives, there will be a financial industry.

What's happening, however, is a winnowing. Finance may have outgrown the sustainable limits of its role in the U.S. economy, and might now have to endure a long and painful era of retrenchment. That’s a scary prospect for workers in the industry, most of whom would find it hard to know whether their positions would be the ones to be eliminated or reduced in importance. Already there are signs of a culling, as New York City loses finance jobs and bankers’ bonuses get squeezed.

For the past seven decades, but especially since 1980, finance has grown fat indeed. The share of gross domestic product going to the finance, insurance and real estate industries rose from less than 4 percent in the early 20th century to more than 8 percent by the start of the 21st. Here, from a paper by economist Thomas Philippon, is a picture of the change: 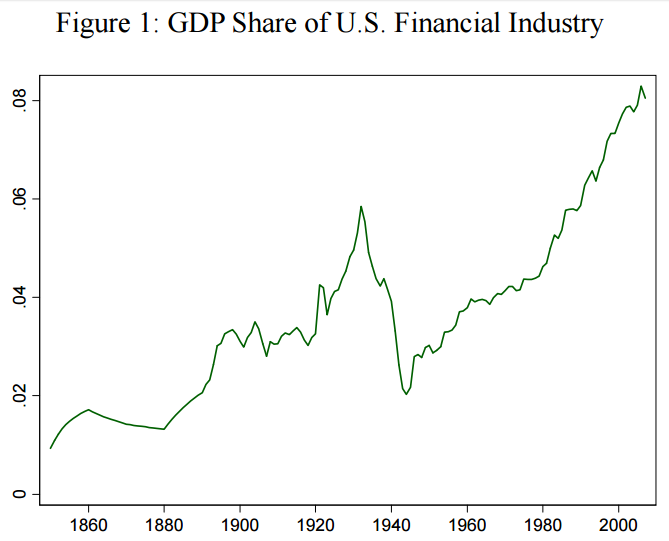 Financial-industry profits also soared, briefly topping 40 percent of all U.S. business profits in the first years of the century. Compensation for financial sector employees far outpaced that of workers in other industries, even after accounting for their average higher skill levels.

It’s a cliché by now to ask whether this explosion of finance represents an enduring greater need for financial services, or an unsustainable boom. Instinct says that it’s some of both. But to the degree that it’s the latter, that leads to the next question: Which areas of finance will shrink? Where will the job and wage cuts come?

One obvious area is in trading. All markets need market makers to provide liquidity and match buyers and sellers. In the olden days, that job was done by armies of humans on phones, or in a trading pit. Now much of it is done electronically.

That opens the way for robots -- aka algorithms -- to take the jobs of human traders. That includes the dreaded high-frequency traders, of course, but it isn’t limited to them. Thanks to algo traders, bid-ask spreads have come down immensely. Since those spreads represent income to market makers, it means the only market makers who can earn a living are the ones who can execute huge volumes of trades. In other words, robots, not humans.

That’s much less true in the bond and derivatives markets, where products are more specialized, rare and bespoke. But even there, it isn't a question of whether algos will increase their share, but merely a question of when and how much. Technology is the major driving force here, but regulation is adding to the pressure on human traders. The Volcker Rule, which restricts banks’ ability to trade for their own accounts, will limit the information available to many traders, who will no longer be needed at many large financial institutions. And the general regulatory push to limit the trading of over-the-counter derivatives will hit the one part of the trading business that is most likely to remain in human hands.

Asset management is a second area that will probably be squeezed by the double fists of technology and regulation. As Philippon has shown, asset management, along with real estate, is one of the two sectors responsible for most of the financial industry’s growth. But that might just make it ripe for compression.

As with trading, the biggest force putting pressure on asset management is new technology. Electronic trading has made it easier to exchange assets in bulk and manage diversified portfolios such as exchange-traded funds. Cheaper diversification means more investors will diversify -- a move aided by the general shift to passive investing. Instead of picking stocks, many asset managers will now just stick their clients’ money into a basket of ETFs and index funds, and let it stay there.

But that’s not a very time-consuming job. It means each asset manager will be able to handle much larger volumes. That’s probably driving the rise of titanic asset-management behemoths like Vanguard and BlackRock.

Passive investing also means that each dollar of assets takes less time and effort to manage. That should naturally lead to lower prices -- in other words, to lower management fees. Sure enough, as a 2015 Morningstar report shows, mutual-fund expense ratios are declining: 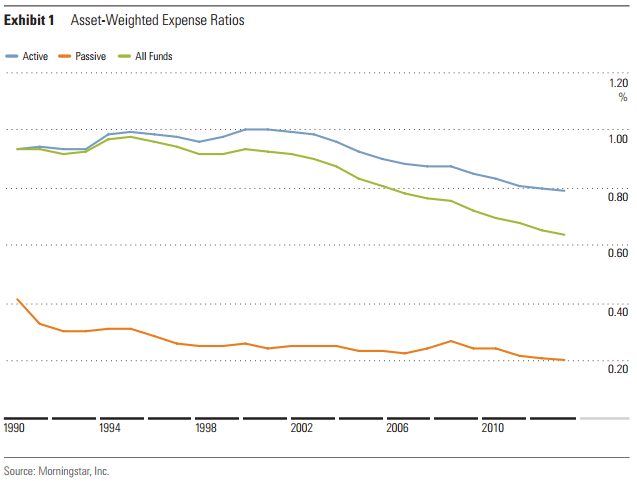 It’s not just passive funds whose fees have dropped -- active ones are getting cheaper as well. That probably reflects increased competition from passive funds, which are gaining in popularity as more and more investors realize how few funds consistently beat the market. It also probably results from the drop in trading costs.

What about wealth-management fees? These are often much higher than mutual-fund fees. But here too, technology and regulation are on the march. The U.S. Department of Labor’s new fiduciary rule is transforming the business -- by reducing the commissions that some advisers earn, it will also cause them to lower their fees.

But again, technology may have the final say. The rise of robo-advisers -- stripped-down online solutions for wealth management -- will cause fees to shrink. Robo-advisers such as Betterment and Wealthfront typically charge a quarter of a percent or less a year. That compares with the 1 percent or more charged by traditional wealth managers.

Fee compression will drive asset managers to become larger-volume, lower-margin businesses -- a common result in many industries disrupted by technology and restricted by regulation. That implies a lot of wealth management firms bite the dust as the industry consolidates.

Trading and asset management are not the only areas of finance -- real estate and insurance are also huge, and retail banking, private equity, traditional investment banking and hedge funds are all substantial. But each is under attack, mainly from disruptive technologies, and to a lesser extent, regulatory changes.

There are still lots of opportunities in the financial sector, and plenty of value to be created. That will always be true. But this does look like an industry that is bound to shrink. It isn't an easy time to be in finance.