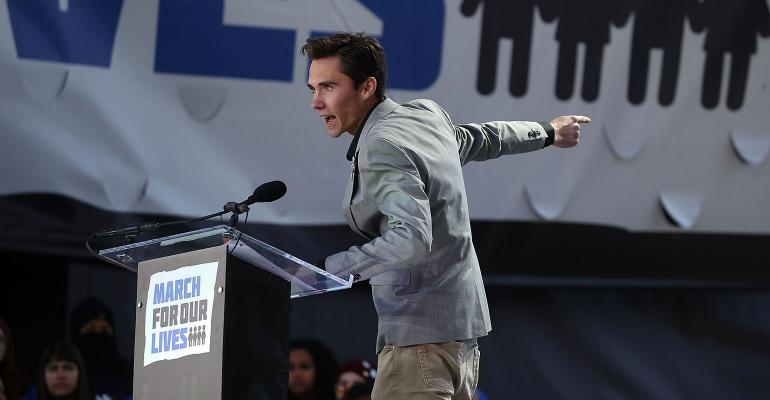 David Hogg called out big asset managers on Twitter, Daniel Glick was sentenced to 12 years in prison and Dennis Zank is going from Raymond James COO to an advisor.

David Hogg, one of the most outspoken survivors of the Feb. 14 shooting at Marjory Stoneman Douglas High School in Parkland, Fla., this week called for a boycott of BlackRock, Vanguard and other companies that invest in gun manufacturers in a series of tweets, according to MarketWatch. BlackRock is the largest institutional investor of gun maker Sturm Ruger & Co. and the second-largest investor of Vista Outdoor Inc., and Smith & Wesson Corp. parent American Outdoor Brands Corp., according to Morningstar data. Vanguard is the second-largest shareholder of Sturm Ruger and third-largest of American Outdoor Brands and Vista Outdoor. While Hogg has singled out the companies for their investments, both have taken action since the Valentine’s Day shooting that killed 17 people. BlackRock last month stripped retailers that sell guns from some of its ETFs and said it would offer two new ETFs that exclude gun makers and retailers. Vanguard offers the FTSE Social Index Fund (VFTSX), which excludes gun makers and said that 359 of its 388 funds do not directly invest in gun makers. A financial advisor from the Chicago area has been sentenced to more than 12 years in federal prison for stealing $5.2 million from his clients, including his in-laws, The Chicago Sun-Times is reporting. Daniel Glick, 65, perpetrated the fraud from 2011 to 2017, when he owned three accounting and financial services firms in Orland Park, a suburb of Chicago. During the scheme, Glick gave forged checks and other phony documents to financial institutions and lied to clients about the use and safety of their investments, prosecutors said. Glick stole most of the money from elderly clients, including his wife’s parents and two people in nursing homes. He used the misappropriated money to pay hundreds of thousands of dollars to two business associates and make Ponzi scheme-type payments to clients. He also used some of the money to pay for business and personal expenses, like a Mercedes-Benz and his mortgage. Raymond James Financial’s Chief Operating Officer Dennis Zank is retiring from his role at the company to become an advisor in a local branch. Zank also serves as CEO of Raymond James & Associates, the firm’s employee channel, and head of the private client group. He’s been in the industry for four decades. The firm will discuss a successor at its May board meeting. “Since he always worked closely with the Private Client Group and even had clients himself, I selected him as president of Raymond James & Associates, where he distinguished himself and proved to be an excellent leader, including overseeing key acquisitions and significant advisor recruitment,” said Chairman Emeritus and former CEO Tom James.