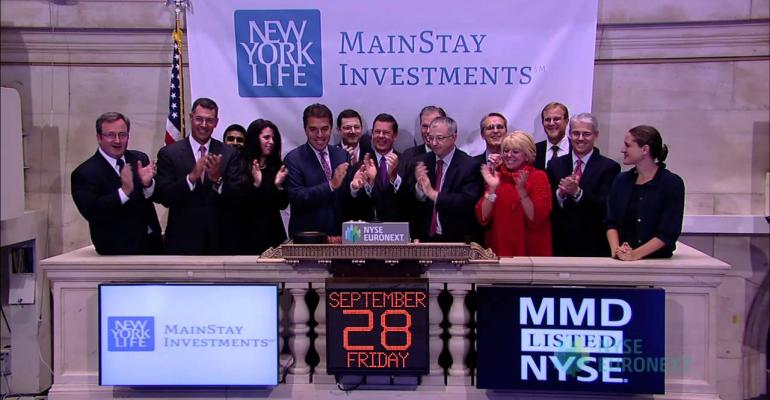 Bossen joined as director of ETF business development at the institutional intermediary division and will focus on the IndexIQ unit that MainStay acquired last year, working with analysts and portfolio-construction teams, the firm said Tuesday in a statement. He previously was at State Street Corp. and reports to John Lloyd, head of the division’s research platform group.

New York Life is counting on IndexIQ, which can bet on macroeconomic themes and wager on individual securities rising and falling, to help fuel a rebound at MainStay. Assets under management at the ETF and mutual fund distribution arm fell more than 20 percent, to about $77 billion, from late 2014 through June. MainStay promoted Harvey Steele to national sales manager in May, and in 2015 added Brian Jacobs to lead retail distribution in the U.S., a position that he held for less than a year before leaving the company. Lloyd joined from Credit Suisse Group AG in January.

“Ken brings extensive knowledge of ETFs, equities and the capital markets from his work with some of the most respected financial institutions in the world,” Lloyd said in the statement. “Ken promises to further strengthen our pipeline of research platform group opportunities to achieve our institutional business goals and deliver ETF-related value to analysts and strategists.”

The IQ Hedge Multi-Strategy Tracker ETF has returned 3.1 percent since Dec. 31, compared with about 6.8 percent for the S&P 500 Index. The fund beat the gauge of U.S. stocks in the early months of this year, when most equities tumbled.

Bossen was the head of ETF portfolio strategy and due diligence at State Street Global Advisors. He previously worked at Morgan Stanley and Citigroup Inc., according to the statement, and received his bachelor’s degree from St. John’s University in New York. A representative for Boston-based State Street had no immediate comment.

New York Life is the largest policyholder-owned life insurer in the U.S.