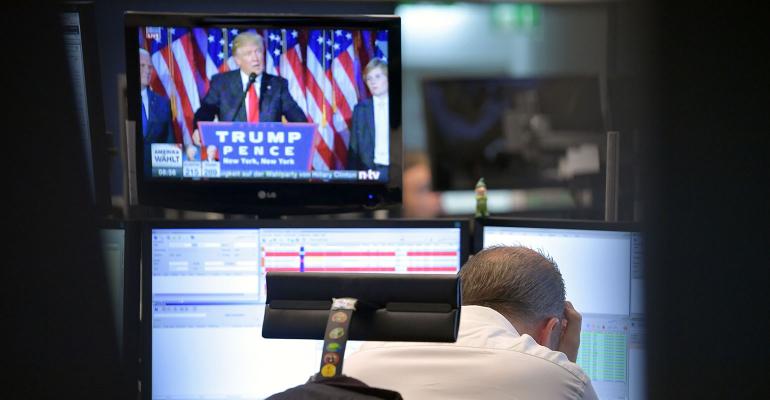 Looking for the Trump Trade

At the Inside ETFs conference, a panel of investors on where to position portfolios for the Trump Bump—barring any 4 a.m. tweets from the commander-in-chief.

If attendees at the recent Inside ETFs conference could design the perfect ETF for the era of Donald Trump, what would it look like?

For Dennis Gartman, publisher of the investment newsletter The Gartman Letter, it would hold industrials and defense contractors, as he takes President Trump at his word that those are areas where investments will be made.

Trump is “good for earnings. We will get tax cuts. They will be large. Clearly we are going to get infrastructure spending. Make it simple for yourself. Invest in infrastructure and military. Steel and ships and railroads.”

“Err on the side of owning things that if you dropped them on your foot, it would hurt,” he said.

Richard Bernstein, CEO of Richard Bernstein Advisors, agreed that the markets should, overall, benefit from Trump’s pro-growth policies. “What’s not to like?” he said, noting already ongoing improvements in the economy. “You have 4.7 percent unemployment, and now we’re going to put fiscal stimulus on top of that?”

“The worst of global deflation is behind us,” he said. “People underestimate global growth and people are not positioned for this rally to last.” Bernstein said small and mid-cap U.S. industrials are among his favorite trades for 2017.

Andrew Lapthorne, head of quantitative research at Societe Generale, had a different view on prospects for U.S. markets. Corporate leverage is at an all time high and $600 billion a year in stock buybacks are propping up share prices. “We think valuations are extremely high.” Higher interest rates, a tightening wage market and higher inflation make him more bullish on overseas assets.

That includes Japan, where, he notes, the central bank is keeping rates at zero and Japanese companies are at historically low debt levels. With a currency hedge, Japan is his favorite bet for 2017.

Daniel Needham, CIO of investment management at Morningstar, was also less bullish on U.S. equities in Trump’s America and warned “our ability to tolerate high interest rates is not the same as it was in the past two cycles.”

“I think the U.S. stock market is incredibly overpriced,” he said. Corporate profit margins have likely peaked, and corporate leverage is “through the roof. Returns are going to be low.” Instead, for 2017, he’s looking at emerging markets and Europe, hedged in the local currency.

Robert Carey, chief marketing strategist at First Trust Advisors, agreed that margins have been the preferred way of creating shareholder value since 2009. “The reality of the last decade is companies have put more non-productive cash on their balance sheets that doesn’t generate any revenue at all. The election improves the chance that companies will invest that cash. That’s what we pay boards to do.” Carry said he liked the health care sector, particularly biotech, for 2017.

Both Laphorn and Bernstein noted that a good “Trump trade” was Russian equities. “Geopolitical risk is inversely related to the state of the global economy,” Bernstein said. “When the global economy gets higher, there are fewer skirmishes. Some of these issues will subside. For material stocks, commodities, Russia is not a bad play.”