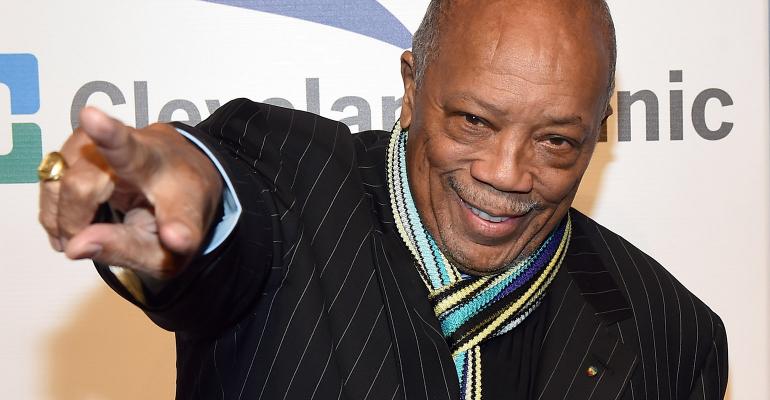 An Icon and an Index

Recognizing new opportunities helped Quincy Jones succeed over seven decades in the music and entertainment industry. Now, he’s helping an indexing firm navigate the industry’s innovations, and raising awareness that investing in the space is accessible to everyone.

Some say an expert in any given industry has a better idea of its investment opportunities than a room full of traditional Wall Street analysts. So, it makes sense that ICONICBETA, an index origination and distribution company, would team up with the legendary Quincy Jones, whose 70-year career has extended across the music, media and entertainment business, for a new offering. He’s produced for the likes of Duke Ellington, Frank Sinatra, Lesley Gore, Michael Jackson, and a host of others.

While Jones had no input on writing the index methodology, his insights inspired the theme, and he hopes his status plays a role in “humanizing” finance and investing in a way that makes it accessible to everyone.

Along with ICONICBETA’s founder and CEO Donna Nairi, the 84-year-old producer recently chatted with WealthManagement.com about where he sees investment opportunity, the best financial advice he ever got and whether it’s possible an album could land with as much impact today as Thriller did 35 years ago.

WealthManagement: How did you get involved in the Quincy Jones Streaming Music, Media & Entertainment Index?

Quincy Jones: My involvement in the index is not as “out of character” as one might think. I was very fortunate early on in my career to be surrounded by some of the greatest business minds who taught me to always keep your antennae up. I’m talking about people like Irving Green and the late Steve Ross. I have what I like to call “serial curiosity.” There is always something new coming up just beyond the horizon, and if you are not paying attention or open to embracing it, it will run over you like a freight train!

I was introduced to the inventor of the concept, Donna Nairi, through my trusted financial advisor, Mike Anders, who is one of the founders over at ICONIQ Capital. Mike always has his finger on the pulse when it comes to new opportunities. So, it was no surprise when he introduced me to Donna, who I immediately connected with because of our mutual understanding that there is a growing need to humanize and inject culture into the financial industry. The idea resonated with me because I grew up on the South Side of Chicago during the Great Depression, and many things that were accessible to others simply weren’t an option for me.

Now, my ideology is that the only reason you should ever look down on someone is to pick them up! So, Donna’s vision of building a global index to track the health of an industry that has supported me for so long was definitely in alignment with mine.

My only fear in life is not being prepared for a great opportunity, so once we identified this open window, we simply couldn’t just sit back and do nothing about it.

Donna Nairi: We met with a number of high-profile people from the entertainment world before deciding on an ambassador to represent the index. When we were introduced to Mr. Jones we didn't look back. Quincy is a master and an icon we consider to be a professor of his industry.

As it relates to the development of the Quincy Jones Streaming Music, Media & Entertainment Index, also known as the QUINCY100, our approach has been to combine the unique insight of industry masters, with the quantitative framework of systematic indexing. It’s an uncommon approach, which has allowed us to look beyond standard fundamentals and frameworks. Quincy did not write the index methodology; however, with over 70 years of experience and involvement with the industry, he provided insight and background that aided in the development of the index theme. We harnessed the expertise of leading data providers and index calculators, as well as worked closely with our counsel, Cadwalader, to thoughtfully and practically address the regulatory aspects of our business.

WM: From an investment perspective, we are told that media companies are on the ropes as the internet has disrupted the traditional business models of distribution. What is the appeal for investors in the parts of the industry you’re looking at?

QJ: You have to always be prepared to adapt to new technologies and delivery systems. I’m old enough to remember when they were saying that television was just a fad that wouldn’t last. And that rap music was supposed to be over in the late '80s. Well, if you look around, today those dudes are some of the biggest entrepreneurs and film and television stars in the business.

I remember going to Holland in 1962 and seeing the first prototype of an audiocassette. Think about that. For years, I couldn’t leave a restaurant without having 10-15 cassettes of people’s demos in my bag. Today, kids have no idea what an audiocassette is. With technology, my philosophy is to understand it so that you drive it rather than letting it drive you. You have to be curious about how technology interacts with things. And if you don’t, you’ll miss the mark.

DN: The QUINCY100 was engineered to reflect the long-term growth in streaming content and disruption in the content delivery ecosystem.

The subscription model is driving a lot of revenue growth in the music and entertainment business overall, and with the increase in mobile accessibility, interactivity and personalization around the world, there should be a healthy trajectory in these business models. Equally, demand for content anywhere, anytime means acceleration in content production. Consider Netflix and their plan to spend up to $8 billion on original content in 2018 with international growth firmly on their radar. We think we’ll see further disruption in how traditional cable and telecom companies interact with evolving media and entertainment business models.

WM: A lot of our readers’ clients are high-net-worth or ultra-high-net-worth individuals that look for opportunities to invest in art. But it can be difficult to determine which artists will be successful and provide a return on investment. Being an extremely successful artist yourself, any advice for art investors?

QJ: It’s all based upon your soul instinct. But you’ve also got to balance it with the hard work and science behind the research. Once you’ve done that, you can trust your instincts because they’ll be fed by what you’ve absorbed and internalized.

Your instincts reflect your background and who you’ve become. I learned many years ago that a great song can make a star out of a mediocre singer, but the three greatest singers in the world can’t save a bad song. It all comes down to the root and the true essence of what the art stands for in its purest form. When you combine a great song with a great singer, and leave space for God to enter the room, something magical can happen. I look for the songs and singers, stories and storytellers that move me, that give me goosebumps. That is my barometer.

WM: Do you have a financial advisor? What has been your experience with him or her?

QJ: As previously mentioned, I work with Mike Anders and Divesh Makan, the founders at ICONIQ Capital, a global multi-family office and merchant bank for a group of influential families. These guys do NOT play, and they sure know what they are doing! I think most of their clients are from Silicon Valley, which gives them access to a very special network. And because of that, they’re able to present me with opportunities I probably wouldn’t see if they didn’t have an ear to the ground within that network.

WM: What is the best financial advice you ever received?

QJ: The great Steve Ross once told me to “be a bear, be a bull, but never be a pig.” The people who achieve greatness have a core skill upon which they expand, and in Steve’s case, his vision was always followed up by speed of lightning execution. Whenever I’m unsure of my next step, I take a lesson from Steve and don’t hesitate or fumble.

WM: Thriller was released 35 years ago on vinyl and cassette. If that album were released today, what would be different?

QJ: I know the thing that would be the same, and that would be the power of the songs on that album. To this day I can hear artists trying to replicate its sonic power. It’s no accident that more than three decades later, no matter where I go in the world, in every club, like clockwork at the witching hour you hear “Billie Jean,” “Beat It,” “Wanna Be Starting Something,” and “Thriller.” In every language on the planet, from prison yards in Thailand to Thrilltheworld.com, [the album] Thriller is still giving people goosebumps.

Each song on an album should have its own thing that contributes to the whole, and you need to put some thought into how each song flows into the next and what part each song plays. With Thriller, every song works together to create one album that gives the listener a dramatic experience in nine scenes. You also need to give the ear six choices of things to listen to on each song so that every time they listen, they hear something new. That way, they have to listen to a song multiple times to get the full experience of it. A big part of the sales success of Thriller was that people were buying three and four copies of the record because they would wear them out playing them over and over again.

That wouldn’t happen today for a host of reasons, from the decoupling of singles, to music being available digitally. But overall, Thriller is one of those records that you simply could not have predicted an outcome for. It was that way when we did it, and I feel the same way about it now.

The distribution model would obviously be different and there would be more avenues for people to stream it, making it more accessible to people who wouldn’t necessarily go out and buy a vinyl. However, the music speaks for itself, and whether we released it in 1980, 2000 or 3000, people would relate to it in the same way that they have done so far.

Quincy Jones is a speaker at the InsideETFs conference, January 21-24, at the Diplomat Beach Resort in Hollywood, Florida.