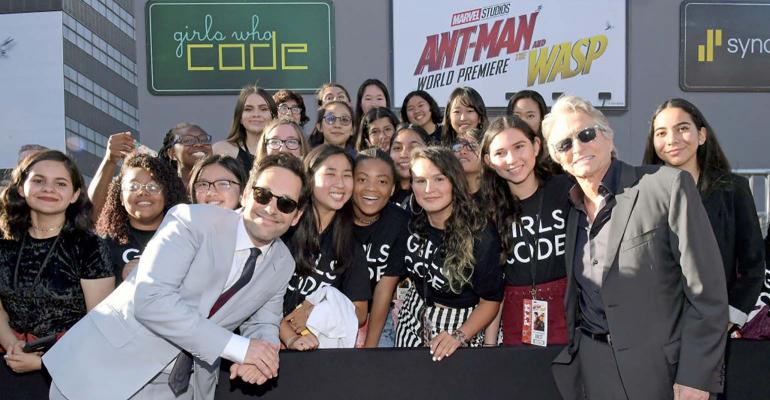 Girls Who Code Is Getting an ETF in New Fund Debut

IndexIQ is launching three new thematic ETFs geared toward socially-conscious investors, each partnering with a nonprofit, donating 10% of its management fee to the cause.

(Bloomberg) -- The Girls Who Code are now the Girls With an ETF.

Well, an ETF partner at least. IndexIQ, a New York Life Investments company, is launching three new thematic exchange-traded funds on Thursday geared toward socially-conscious investors. Each will partner with a major not-for-profit organization, donating 10% of its management fee to the cause.

The IQ Engender Equality ETF (ticker EQUL) is affiliated with Girls Who Code, the fast-growing movement dedicated to closing the gender gap in technology. The fund is designed to offer exposure to companies that have demonstrated a commitment to gender equality.

The IQ Cleaner Transport ETF (CLNR) will link with the National Wildlife Federation and targets companies advancing more environmentally efficient transportation. The IQ Clean Oceans ETF (OCEN) is paired with Oceana, an international advocacy group focused on ocean conservation. It will invest in corporations that help reduce pollution at sea.

All three funds carry an expense ratio of 0.45%.

The idea is that investors can both rally behind a cause and reap a return, according to New York Life Investment Management CEO Yie-Hsin Hung.

“Investors are demanding more when it comes to ESG investment approaches,” she said in a press release. “Meeting these demands takes nothing short of a revolution in ESG investing, and that is exactly what we have sought to do.”

The trio of new ETFs -- part of a small range dubbed “Dual Impact” by New York Life Investments -- are the latest in the booming market for products that meet higher environmental, social and governance standards. The world’s biggest asset manager, BlackRock Inc., said last week that around a third of the $98 billion in long-term net flows that it took in last quarter went into sustainable funds.

The amount each partner receives from New York Life Investments could depend on the success of the funds.

The firm, which has about $600 billion under management, says it will determine donations by taking the lesser of 0.045% of the associated fund’s average daily net managed assets or 10% of the fund’s net annual management fee -- taking into account all applicable fee waivers and expense reimbursements.

It has committed to pay a minimum annual contribution to Girls Who Code of $25,000 between 2021 and 2025, according to the press release, while NWF will get a minimum $30,000 per year. Oceana will be paid at least $50,000 annually for five years after the fund lists.

The causes are chosen based on both emerging investment ideas and diversification aims, according to Wendy Wong, head of sustainable investment partnerships at New York Life Investments.

“We first start by identifying an emerging trend -- a compelling investment thesis,” she said. “Then, similar to how investors diversify their investment portfolio, we wanted to diversify the causes we support.”

The IQ Healthy Hearts ETF (HART) launched earlier this year in alignment with the American Heart Association and has about $7 million in assets. It has returned about 13% since its January debut.