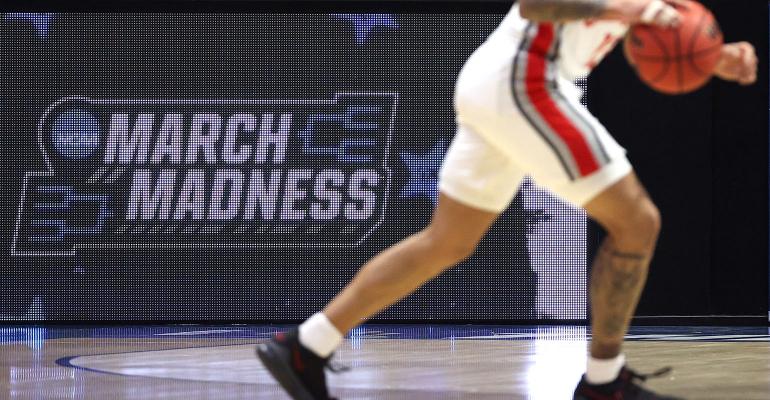 Fund News Advisors Can Use: ETFs and the Parabolic Rise in GameStop’s Price

In this week's fund news, SPDR’s head of research, Matthew Bartolini, uses the GME frenzy as a case study for ETFs’ effectiveness; the Mooch and Fidelity file for Bitcoin ETFs; and iShares and State Street slash ETF fees.

We’re in the throes of March Madness, the name given to the annual NCAA college basketball tournament, when many Americans predict and track the process of elimination of teams over the course of the month. It often pits Davids against Goliaths, and in a recent LinkedIn post, Matthew Bartolini, managing director and head of SPDR Americas Research at SPDR Exchange Traded Funds, argues that the stock market had its own March Madness in January, when shares of GameStop (GME) rallied 1,625%. The stock was up 400% in the last week of January.

“However, this year the videogame retailer GameStop’s (GME) market activity during the first quarter certainly resembled the tournament’s bracket-busting gameplay, spontaneity and national mind-share absorption,” Bartolini writes. “And the resulting butterfly effect on ETFs was akin to how a missed shot by a freshman shooting guard on a No. 2 seed can lead to millions of brackets being busted all at once.”

GameStop’s rise in price affected many ETFs holding shares of the stock, sending those ETFs’ exposure to GME higher. That includes an ETF sponsored by Bartolini’s own company, the SPDR S&P Retail ETF (XRT). As of December 2020, the ETF had a 1% weighting to GME; but by the end of January 2021, it was up to 19.5% of the portfolio. And yet, Bartolini argues that the ETF acted just as intended.

“Its weight went up not from buying GME shares, but from GME’s price appreciation. It was just tracking the industry’s movements after all, as intended,” he writes.

The ETF still owned the same percent of shares in GME that it had a few weeks before the frenzy started (0.77%). And the ETF never accounted for more than 1% of the stock’s daily trading volume, according to Bartolini’s charts.

“And for the entire first quarter, as the GME mania extended beyond the final days of January like a Cinderella team making it to the Elite Eight of the NCAA tournament, XRT still averaged just 0.11% of all GME shares traded,” he writes. “Overall, the takeaway is that this extremely small amount of trading volume from ETF creation/redemption activity is far too diminutive to have any impact on the security.”

The race to get regulatory signoff for the first bitcoin ETF continues. Anthony Scaramucci, the former White House director of communications and founder of SkyBridge Capital, is backing a new ETF that would invest in the cryptocurrency. First Trust Advisors has filed to launch the First Trust SkyBridge Bitcoin ETF Trust, according to Bloomberg. Scaramucci’s firm launched a bitcoin fund earlier this year, but it’s only available to accredited investors.

Meanwhile, Fidelity also filed with the SEC this week to launch a bitcoin ETF, called the Wise Origin Bitcoin Trust, which would use underlying prices from U.S.-based exchanges such as Bitstamp, Coinbase, Gemini, itBit and Kraken.

Fidelity and First Trust join four other firms that have filed for a cryptocurrency ETF, including WisdomTree and VanEck Associates.

Two of the largest asset managers slashed fees on their exchange traded funds this week.

BlackRock reduced the expense ratios on nine of iShares Morningstar U.S. Equity Style Box ETFs to a range of 3 to 6 basis points, down from a range of 25 to 30 basis points, according to Bloomberg. The firm’s style ETFs account for $7.6 billion in assets. The firm also named new benchmarks for these funds and new tickers.

The firm’s suite of Portfolio ETFs, launched in 2017, has more than $92 billion in assets.

The TAMP is approaching $400 million in assets under management and administration, and has a specific focus on serving advisors with sub-$100 million in AUM.