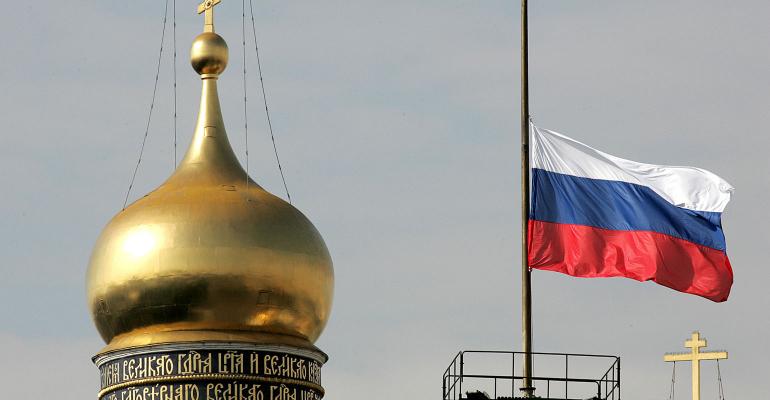 The announcement that a tiny Tokyo-listed product will halt trading means every Russia-focused stock ETF in the world is now suspended or will be soon.

(Bloomberg) -- From the pandemic to the Greek debt crisis, exchange-traded funds have operated like it was business as usual during some of the toughest times in markets. But with Russia’s war on Ukraine, the industry is finally facing an event it can’t trade through.

The announcement Wednesday that a tiny Tokyo-listed product will halt trading next week means every Russia-focused stock ETF in the world is now suspended or will be soon. That kind of shutdown is something events like the Arab Spring and even Covid never managed to do.

Investors turn to these products in times of turmoil both as sources of liquidity and vehicles of price discovery when assets tracked by the funds become stuck. But the financial fallout from Russia’s invasion of Ukraine is so extreme that this time around, fund issuers can no longer make the untradeable tradable.

“These are extraordinary circumstances, a situation that we’ve never lived through during the era of ETFs,” said Ben Johnson, director of global ETF research for Morningstar Inc. “This is an episode where we learned what the limitations are.”

The sanctions targeting Russia for the invasion and the country’s own response -- including a domestic market shutdown and capital controls -- mean the Russian stocks held by a swath of ETFs are untradeable. In previous similar episodes, like when Egyptian markets shuttered for almost two months during the Arab Spring, funds kept transacting on expectations the bourse would eventually reopen. The underlying assets and funds fell into line when it did.

The issue with Russia is that even if the Moscow market reopens, restrictions will mean the ETFs still can’t buy or sell Russian assets.

“There are situations throughout time that I think are unique and unprecedented, and this is one,” said Sylvia Jablonski, CEO of Defiance ETFs.

Jablonski expects these events will prompt the industry to create new guidelines for any future similar scenario. “I think that those will become index rules so that investors know, ‘Hey, if X, Y, Z were to happen, and we ended up having the stock market close or sanctions versus this country, the index provider will value this security at zero, or we’ll use the last price until the situation is over,’” she said.

For now, fund issuers and investors are both still at the mercy of geopolitical events. The Next Funds Russia RTS Linked ETF (ticker 1324 JP) is the last Russia-focused ETF trading in major markets, according to data compiled by Bloomberg. It will be halted from March 17, Japan Exchange Group Inc. said in a statement.

The move follows suspensions for products from issuers from BlackRock Inc. to Franklin Templeton. It has already been announced that at least one fund, a leveraged offering from Direxion Shares ETF Trust, is being shut down. The fates of all the others -- which mostly physically hold Russian assets, as opposed to the options used by the leveraged fund -- remain uncertain.

Eric Balchunas, Bloomberg Intelligence senior ETF analyst, reckons there are two likely outcomes. The first is that the geopolitical situation gets better, the halt is lifted and normalcy resumes, something that would likely cause the prices of these funds to skyrocket. The second would see the crisis intensify, the ETFs delisted and liquidated, and investors wiped out.

“I’ve never seen anything like this,” said Balchunas. “ETFs are the cockroaches of the investment world. They trade through everything, and that’s been proven over and over.”

Balchunas points out that in some cases mutual funds in Europe stopped redemptions weeks prior to ETFs taking similar action. Meanwhile, the decisions to halt appear to stem from the stock exchanges hosting the funds, not the ETF issuers.

To industry pros, it’s an indication that the ETF structure is still one of the best ways to weather a crisis.

“At least for the first few days last week, you saw the use-case, because they were still trading while the underlying assets were totally frozen in Russia,” said Ross Mayfield, investment strategy analyst at Robert W. Baird & Co.

That harks back to the Covid-triggered market selloff of 2020, when trading activity in the bond market froze. ETFs were hailed for providing an alternative source of liquidity, the Investment Company Institute said the ecosystem had “proved its resilience” and research even said that the funds acted as a shock absorber for the broader market.

“If the limits on ETFs to serve as a price discovery vehicle are armed conflict, so be it,” said Johnson at Morningstar. “I would say that’s a pretty robust level.”