There’s more refinement to the oil story, though.

What’s driving AMLP and its peers to such gains?

First of all, there are the dividends. Yields for midstream oil and gas outfits are high relative to those of broad-based U.S. equities, utilities, real estate investment trusts and 10-year Treasurys. Real high. That’s, in some part, a consequence of the MLP sector’s present cheapness.

Then there’s the cause of that discount—the massive supply of oil and gas. The market’s glutted and the outfits in the AMLP portfolio are the ones schlepping and holding the stuff. Some of the larger pipelines are actually being used for storage now.

While AMLP fared well on the week, other segments in the oil and gas sector have been getting whipped. Oil prices have slumped to levels last seen two decades ago as global demand withers and supply builds at a breakneck pace.

Oil services and equipment firms have taken the biggest hit. The VanEck Vectors Oil Services ETF (NYSE Arca: OIH) has nosedived 66% this year. Exploration and production companies tracked by the SPDR Oil & Gas Exploration & Production ETF (NYSE Arca: XOP) suffered a 54% loss. While nobody’s escaped unscathed from the oil business collapse, refiners’ losses have been relatively muted. Year to date, the VanEck Vectors Oil Refiners ETF (NYSE Arca: CRAK) has given up only 35% of its share value since the top of the year.

Refiners actually benefit from lower oil input prices. Low-cost crude improves gross refining margins. Historically, the nominal margin for a 3-2-1 operation—one that breaks down three barrels of crude into two barrels of gasoline and one barrel of fuel oil—averages 25%. Last week, though, the mean spread trebled to 76%. 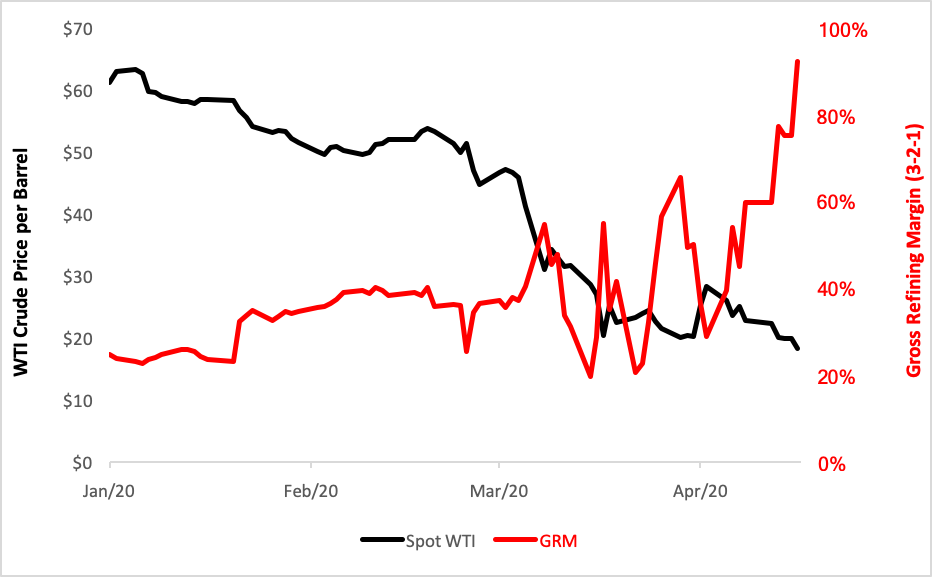 Refiners would be flush if only they could sell more of their distillates, but with consumers sheltering in place and travel curtailed the nation’s thirst for petrol and jet fuel isn’t likely to be roused until the coronavirus stranglehold is broken.

On the input side, the recent deal to slash daily oil production by 10 million barrels won’t take effect until May 1. Even then, there’ll be overhanging supply to work off. Industry insiders estimate that demand has fallen by some 30 million barrels daily, three times the amount oil producers have agreed to cut. And that’s if producers don’t cheat—a wishful supposition given OPEC history.

With all that, the differential calculus of the oil business still favors the refiners populating the CRAK portfolio. These include Phillips 66 (NYSE: PSX), Valero Energy Corp. (NYSE: VLO), Marathon Petroleum Corp. (NYSE: MPC) and 22 other global processors.

Crude supplies are likely to remain ample in the near term while demand for distillates will ratchet up as the economy gradually reopens. That should keep refining margins fat for a while.

So, who said fat is a bad thing?